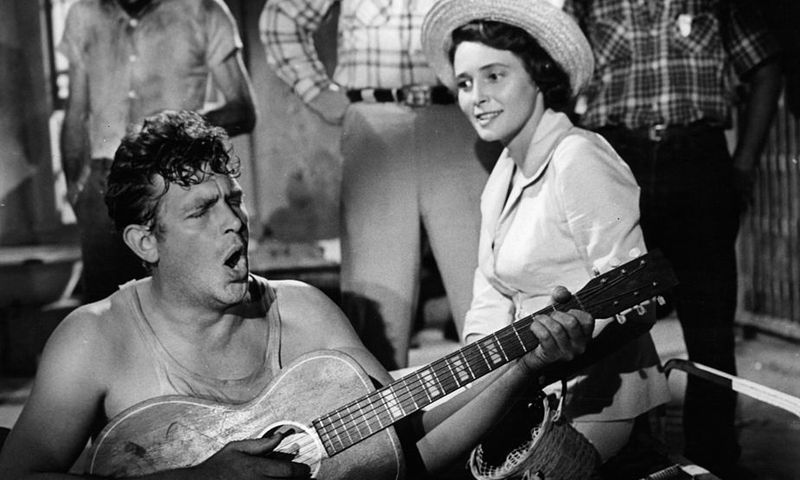 Lonesome Rhodes, a brashly-charming-drunken-drifter, is turned radio personality by Marcia Jeffries in Elia Kazan’s 1957 film, A Face in The Crowd. The film explores the climb to power of a rabble-rousing anti-social con man, as well as Lonesome’s ultimate tantruming downfall. Sound familiar? But perhaps the real question lies in why a woman like Marcia falls for such a man. Yes, “sexy sells” to some women (the sex appeal, that is, of narcissistic bad boys). But why does Marcia fall so hard? What draws her in? And what 6 fateful mistakes does she make in loving the wrong man?

What attracts Marcia Jeffries (Patricia Neal) to Lonesome Rhodes (Andy Griffith) is more than sex appeal and isn’t something that easily meets the eye. The answer is hidden in the sub-text of A Face in the Crowd and in the longings of both Marcia and Lonesome.

Lonesome openly tells Marcia his sad story, of a mother too busy with all the “uncles” from this town and the next to love him. And he shrugs it off as if it’s had no effect.

The reality becomes quite obvious, though, in his insatiable hunger for the adoration of any woman he can find (as well as of his fans.) He’ll eat anyone up, spit them out, and move on to the next – just like his mother. He’s a user, pure and simple.

Lonesome’s hunger is obvious. Marcia’s desire to be special isn’t. Does she know she’s lonely? Maybe not. Maybe she’s hidden her need for love. That blatant desire in Lonesome, a mirror of her own, is the unconscious hook. Did she, too, miss out on a mother’s love?

Marcia’s a go-getter, a small-town radio producer working for her uncle’s station after graduation from Sarah Lawrence College. When she needs an angle for her show, A Face in the Crowd, she decides to interview some new Faces, men in the jail drunk-tank.

In comes Lonesome Rhodes, a drifter, haunting seedy bars, drying out overnight in jail. Can he sing? Does he have charm? Is he outrageous? Can he talk up a storm? Yes, he might just be the draw the station needs. And, yes, he captures his audiences.

Lonesome also captures Marcia. She’ll do anything to have him. That’s her first mistake. Here are 6 other “mistakes” a woman makes in falling for a narcissistic “bad boy.”

#1 Hiding Your Need for Love

Marcia appears to need nothing, at least at first. Yet, it isn’t only Lonesome who’s hungry. He can’t get enough attention. He eats it up. That’s typical of a narcissistic man.

But Marcia’s hungry for love too, she just can’t let herself know it. She does everything for her uncle’s station and takes care of herself. She’s tough. Plus, she keeps rebuffing the loyal Mel Miller (Walter Matthau), her equal, a nice guy, who tries to get her to see the light of day. About Lonesome that is. And, about him too. At least, he wishes.

Women like Marcia can’t let down their guards. She doesn’t even admit her real attraction to Lonesome for a long time. Instead, she focuses on A Face in the Crowd’s “ratings.” And, she takes care of him.

There’s something about Lonesome’s crass sexiness that draws her in. Yet, really, what she sees in him is the hungry little child in her that needs love. The one she keeps hidden, mostly from herself. She pushes Mel away and becomes essential to Lonesome.

#2 Being Essential to Him

Being essential to a charming man who takes but gives nothing is a trap many women fall into. It’s the illusion he won’t leave you if he needs you. Marcia’s afraid she’s not enough, so she feeds into Lonesome’s insatiable narcissistic need for attention.

She’s always there for him, happy to be his “right hand,” sucked into his fears, early trauma, insecurities. They’re her own, although she doesn’t know it. When he’s given the key to all 25 rooms on the top floors of a prestigious hotel, he calls her, panicking:

“I feel like a shipwreck that fell on an island. If you don’t come, I’ll dive off this balcony. It scares me. All those people waiting to hear what I have to say … I need you because you level with me. You’re my lifeline to truth. Marry me, Marcia, will you?”

He doesn’t love her, he’s using her. That’s what narcissistic men do. They’re capable only of thinking of themselves. And, since she’s made herself essential to him, (to his craving to be wanted,) he needs her close at hand. She’ll turn her cheek to all the other women, save him until he destroys her, wanting him to “wake up” and want her.

Change his ways? Of course not. He’ll do what he pleases, even if it hurts her. And, she lets him, pushing her needs aside. She’s the one doing all the giving and all the work.

It’s all too easy to push yourself aside. Marcia does. This is her way of feeling safe, asking for nothing, and being there for him – at his beck and call. Yes, she’s essential. And, yes, Lonesome needs her. After all, he’s “just a country boy.” What does he really know about life or fame or playing with the powerful? He’s all bluff and outrageous bluster.

But, make no mistake, Marcia’s as enamored as Betty Lou (Lee Remick) and all of his screaming teenage fans. Just watch her always-quietly-adoring face in the background. Yes, she’ll push herself aside to keep him around. He’s a fantasy man, in her mind.

She doesn’t see how Lonesome demeans those who help him, sends the town dogs to the Chief of Police’s house, or all the kids to invade her uncle’s pool. He can do no wrong in her eyes. Not only does she push herself aside, but she also makes excuses for him and is with him the whole way. She won’t listen to her instincts or to the smart Mel Miller.

#4 Making Excuses for Him

One method of making excuses is to turn a blind eye to what you know. You ignore the whole reality of him and focus on what you want to see and who you want him to be.

Yet, what’s real? Lonesome makes false promises, lies, does what he wants. He proposes to Marcia, then has another girl in his room. His “wife” shows up: “I hope you have better luck keeping him lonesome than I did.” He said he got a divorce. But she’s too drawn into his “magic,” his irreverent, rabble-rousing, appeal. Now, she thinks he’s hers.

That’s not the story, not when they return to the home of A Face in the Crowd where he’ll choose Miss Arkansas of 1957. He’s welcomed as a “great humanitarian, our very own Lonesome Rhodes.” No, he’s not. He just knows what to say to get what he wants.

Lonesome’s not the man who lives in Marcia’s mind. He feeds on adoration, stirs it up, ignores Marcia’s feelings (as she ignores her own) and his so-called commitment to her.

Yes, Lonesome gets lots of that adoration from all the “hot” 17-year-old flirtatious majorettes, the Miss Arkansas contestants. Not only will Lonesome pick the next Miss Arkansas, but Marcia Jeffries’s supposed fiancé can also have his own personal pick.

No, Marcia doesn’t see what’s right in front of her: the women he’s already lied about, his wandering eye, his infidelities, and concern only for who wants him at any given moment. And Betty Lou, 17-year-old “unanimous” winner of Miss Arkansas, has pasted his photo on her ceiling so he’s the first thing she sees when she wakes in the morning.

Who can beat that? He lies (again) to Marcia, that he’s going to Mexico to finalize his divorce. But when he returns, he’s married to Betty Lou. And, what does he do to hurt Marcia more?  He makes her feel just like he did as a little boy when his mother came home with all the “uncles.” He flaunts his “love” for Betty Lou right in Marcia’s face.

She wanted him to love her best – and she tried to be so essential, so giving, that he’d change and choose her over all the others. Narcissistic men do not and cannot change. When she’s no longer of use to him, that is that. She is now the unwanted child.

Mel’s tried to warn her, but as he says, she’s “a lackey,” one clearly tied to her early trauma, which Lonesome replays. And poor Mel, “hates the extroverts who have a strange attraction for nice girls who should know better.” But Marcia, can’t.

#6 Going Blind to His Cruelty

Mel sees Marcia’s role perfectly: “You’re the shock absorber, for ex-wives, new wives, tramps. You’re the wheel of efficiency without which Lonesome Rhodes plunges off a track and leaps to destruction.” Marcia doesn’t see. She wants to prove she’s more.

Yet the signs of such a man are there from the start. On the way to Memphis, he’d said: “I’m glad to shake this town.” When Marcia looked askance at him, he distracted her: “Aw, come on, honey. You know me well enough not to believe everything I say.”

Everything he’s done is cruel. He has no respect or cares for Marcia’s (or anyone’s) feelings, thinking only of himself. That’s what narcissistic men do. No one else exists.

And, worse, he’ll blame you for how he’s treated you. Lonesome says he was afraid to marry Marcia. “You know more than I do and you’re so goddamned critical. You and that smart-aleck-y Mel. The bigger I get, the smaller you make me feel.” It’s never his fault.

But, watch out. He’ll take everything he can and drain you dry. He’ll use you all up. And, he’ll leave you feeling smaller than he feels if you don’t protect yourself.

Getting Wise & Getting Free

It’s not easy to get free. Marcia pines for him and watches his shows, unable to let go. When Betty Lou “betrays” Lonesome, he shows up, undressing in Marcia’s room, expecting her to want him, at his whim. “Marcia, it’s me. The King. Lonesome’s back.”

Marcia almost gives in, her longing to be special stronger than her hurt. But struggling not to be seduced again, she runs. Lonesome now begins to openly demean everyone who works for him. And when Marcia intentionally doesn’t show up to coordinate the show, he throws a fit, calling her a “self-important neurotic female.”

Thinking he’s off the air, he says what he really feels: “Good night you stupid idiots, you miserable slobs … they’re all a lot of trained seals. I throw them a dead fish and they’ll flap their flippers.” Marcia broadcasts it all.

Marcia Jeffries feels her rage. She won’t be one of his trained seals anymore. And the loyal Mel Miller is with her, as she and Lonesome’s fans hear the real monster he is.

Retaliation is part of it. Hurt can make you strike out, mixed with anger at yourself for what you’ve allowed. Yet, the sensitive Mel says the truth. It’s not her fault: “You were taken in like we all were. But we get wise to it, that’s our strength.” Getting wise is #1.

Marcia is finally strong and wise. With Mel by her side, she gets into a taxi, blocking out Lonesome’s screams not to leave him. Leaving him is the only way Marcia can get free.