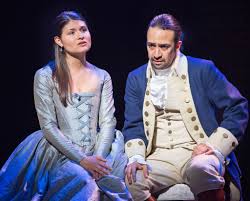 This piece on Hamilton was originally written for and published on YourTango.com.

What can turn infidelity around?

What does “I’m not throwing away my shot” have to do with infidelity in marriage? You’d be surprised. There’s a lesson in it, to be sure. In fact, the Tony-award-winning musical Hamilton holds many lessons on infidelity.

To start, we have a need for power, the past, and old hungers. If you’ve had a painful past, the side-effects likely won’t let you free — no matter how hard you try. So, what do you do with the pain? You cling to any form of “power” you can find over helplessness or shame. But then, your longings can’t be satisfied, especially if you’re afraid to open your heart.

Infidelity is one form that worry and shame may take. It might seem to give you power over a fear of being left, putting the one you can’t quite fully love on the outside of a triangle.

Looking at Alexander Hamilton’s story, you can uncover why that forbidden fruit can be so tempting, even if you have a kind and trusting love right there beside you.

Here are 5 lessons about infidelity you can learn from Hamilton.

Childhoods are sometimes very hard. When they are, you’re left feeling powerless; too vulnerable to open up to love; longing for it, but untrusting; and scared you won’t be wanted, good enough, or ever have a place where you really belong. Like Hamilton, you may be hungry for power any way you can get it. Overall, the fears are too unsettling to feel.

To say Alexander Hamilton’s childhood was hard is to put it mildly. An orphan at 12, the son of “a whore,” he lived in squalor, had no father. But, as the song also says, “inside, there was an invisible and insatiable longing to find something to be part of.”

There was also a voice in his head: “Don’t forget where you came from.” A fear and shame that only power – the world knowing his name – could help him overcome. Did being Washington’s right-hand man work for him? No. A threat was always lurking.

Not being good enough was that threat. We see it happen when Eliza’s sister makes him feel second best. So, to the loving Eliza, he says, “I do.” Yet, any love brings old fears (“I’ll never forget my mother’s face”). He lost her. Plus, she haunts him in other ways. Sleeping with a man who wasn’t her husband made her a “whore,” and him illegitimate.

#2 You choose power over shame.

Hamilton lives in shame. To him, Eliza’s “a poor man’s wife.” Legitimacy. Being desired. These are measured above a need for love. Love isn’t safe. He’ll risk love for power. Look what already happened when he needed someone. He must be: Seen. Valued. Legitimized. These are his superpowers. He can’t believe in love. Needing love is weak.

Plus, Eliza is rich and worthy. Hamilton says “I do,” but what if you only have “$1 to your name; no family since you were a child?” That voice in your head judges you; makes you certain you’ll be left all alone. No, he can’t throw away his shot. At power. Any way he can get it. But power isn’t easy. When you feel, always, you are less than everyone else.

You want to believe that “in New York, you can be a new man.” Yet, the past follows you everywhere. That voice, now in the form of Eliza’s sister, Abigail, singing: “Like me, you’ll never be satisfied. Never satisfied.” Hamilton won’t and can’t throw away his shot.

Abigail’s voice is a siren’s call that reminds him: “You’ll always want and need more, to feel like someone at all.” She wants him; keeps his eyes in her life; her sister is his wife, but he couldn’t make her feel like someone. He wasn’t a rich enough man.

Nor can anything make him feel like someone either. Not even Eliza’s loving reassurances: “Look around, look around, where you started.” He doesn’t believe it. Called as Washington’s right-hand man, he turns and kisses his pregnant wife goodbye.

Hamilton runs to war. His war. Remember, his eyes stray, even on his wedding day. There’s always something more to look for. To be more than “a poor unworthy man.”

And, Hamilton constantly struggles to keep his guard up. Especially in the face of love. He’ll need no one. Turns aggressively when his wife tries to comfort him after his friend, John, is killed: “I have so much work to do.” Working hard to keep up that guard.

Is it a weakness to need love? Yes, to someone hurt in childhood, it is.

4. You’re too scared to open your heart.

Needing someone feels dangerous. They can leave or die. Hamilton’s father and mother did. Now, his friend is dead. Deep down you feel shame for wanting anything you can lose. You even think it’s weak. After all, you’ve fought for power over those feelings and fears your whole life. You just can’t risk opening up your heart.

But, then you’re lonely. And, when you’re really alone, you might feel left and unwanted, even though you actually aren’t. Eliza (and Abigail) plead with Hamilton to come away with them to visit their father. Once again, he “has a lot of work” to do. Yet, those old “reminders” sometimes seem to be everywhere. Worse, you think they’re true.

When feeling left and unwanted won’t let you be, you’re in danger of falling into an old hurricane of fear and sadness. You have to work really hard to feel you are someone. And, being desired is another power that keeps the pain at bay. Your eyes stray …

A temptress knocks, “all alone with no means to get home,” in her red dress. Poor and lost; just like you are. But, she’s worse off than you. And, you can be the savior. All the feelings you don’t want to feel (not intentionally, of course) are in her and other people.

You’ve managed to keep your guard up. To find someone that needs you more than you need her; plus, you’re married. She’s the one “never satisfied.” There’s no “risk” to you.

At least that’s what you want to believe. That you can somehow pull it off. Until that is, you’ve “forfeited a place” in the heart of the one you really need. She leaves. Your son is killed. Once again, hit with that hurricane you tried to avoid, your life is falling apart.

5. Giving up your shot just might turn things around.

Giving up your shot just might turn things around. It does for Hamilton when he lets himself do the unimaginable: asks Eliza for forgiveness; takes her comfort and love; grieves with her for their beloved son; and gives her back the love she also needs.

And, in love for his friend, Aaron Burr, the one he thought an enemy because he felt abandoned and betrayed, Hamilton gives away his shot. He intentionally loses the duel. Leaving his “power” behind costs him his life. Love doesn’t have to cost you, yours.

Opening your heart to love, and laying down the sword of infidelity, doesn’t mean being left powerless. You don’t need to turn away because love makes you feel ashamed of your need. Hamilton found that needing Eliza was not a weakness at all. You can too.

Give up your shot. Power isn’t in “not needing” anyone.

Love isn’t weakness. Build trust. Not everyone hurts you.

You’re good enough. It’s the past that says you’re not.

And let love satisfy you. Try to see if you can open your heart.

If you can’t, then the ghosts of the past are still following you and trying to take control. There’s no shame in getting help. Help can change your life.

I’m Dr. Sandra Cohen, a Beverly Hills psychoanalyst. I specialize in working with those struggling to trust love due to traumatic childhoods. On my blog, Characters on the Couch, I write about the real human problems in characters in film.