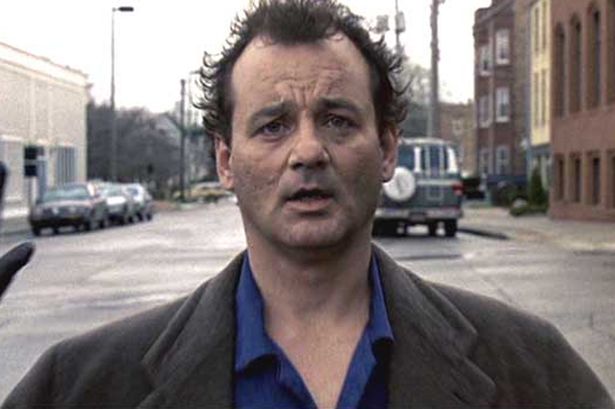 Do you feel like poor Phil Connors (Bill Murray) – stuck repeating the same day over and over again? COVID-19 quarantine can do that. It’s been 27 years since Harold Ramis’ Groundhog Day hit the theaters for the first time. But 6 months probably feels long enough. If you’ve been ruminating about your love life or caught in a pessimistic time-loop, you can learn a thing or two from this Pittsburg weatherman’s very, very bad rut; the rut of a closed down, negative, glass-half-empty (let’s add, scared of love) state of mind. He stays in that rut until Rita Hanson (Andie MacDowell) comes along and shakes him up a bit. Yet, what does it really take for Phil to get out of his nightmare of a very long and very bad day? Even if it’s different for you – Groundhog Day will lift your spirits and give you hope.

First – let’s start with what’s really going on. No one literally repeats the same day, of course, but it can seem like it sometimes. Especially if there’s a relentless old tape playing in your head that you can’t get away from.

I’m sure this “groundhog voice” in Phil Connors’ head has been around a long time. It tells him not to venture out – to expect people not to like him or want him and, certainly not to love him. It also tells him that his best protection is just not to like them first. Phil Connors lives his life turning people away.

That’s not working so well anymore. It’s part of the trap – made worse by the fact that he actually likes his positive, warm, upbeat, kind producer, Rita (even more than just “likes”). And he has to fight off that realization with his usual dark, sarcastic, demeaning, negative, miserable, mood.

Phil’s stuck in a battle with his longings for love. Trapped, he is, in Punxsutawney, Pennsylvania, forced to introduce – (maybe we should say “face”) – Phil the Groundhog. And, he’ll wake up over and over at 6 AM on February 2nd – to Sonny and Cher’s “I Got You Babe” until he gets something right. Not only is he scared and frustrated, but Phil also doesn’t have a Babe.

Yet wait, Phil. Listen carefully. Here’s a different kind of tape that goes off every single morning. Take it as a clue about how to get out of your trap. Listen to all the lyrics of “I Got You, Babe.” Listen and learn: To believe in love. Take a risk. Not to listen to the voice that tries to discourage you and tell you otherwise.

Right now, the Groundhog voice is winning. Phil doesn’t feel like anything he does matters. He tries to tell Rita he’s repeating the same day, but she doesn’t understand and says he “should have his head examined.” He does, but the neurologist and psychiatrist don’t understand what’s going on either.

Poor Phil Connors, unable to get help, is forced to take matters into his own hands. He “lives like there’s no tomorrow;” no consequences; no panic; and no despair; not a care in the world.

Yet, isn’t this another version of what he’s been doing his whole life – telling himself he doesn’t care?

Breaking All Those Old (Parental) Rules

We see that Phil’s afraid of love. “Why” is the question? We get another clue as he runs around Punxsutawney with two guys he meets in a bowing alley on one of those bad February 2nd days. They’re drinking beer; he’s not. One of them says something that – maybe – begins to register a little: he pegs Phil for “a glass half empty kind of guy.”

This idea excites him – because he’s fighting some pretty harsh, restrictive parental voices still living in his head; with all their proscriptions and rules: “Clean up your room; take it like a man; stand up straight; be nice to your sister; don’t drink beer and wine … ever. Oh yeah: and don’t drive on the railroad tracks.”

He’s resentful, of course. These parental voices have also done him no good: “I’m not going to live by their rules any longer. You make choices and you live with them.” So, he does. He crashes into garbage cans; drives on the train tracks with police chasing him; and he almost hits the train head-on: He goes to jail, but the next day …

He wakes up to “I’ve Got You Babe” – and it’s another February 2nd. This time, he’s happy! “Yes!” He’s broken all the rules that have made him the miserable angry man he is and he doesn’t stop now. He eats everything he wants – all the unhealthy donuts, flapjacks, sticky buns, cupcakes, eggs and bacon, a ham sandwich thick with mayonnaise.

But, when Rita says: “I like to see a man of advancing years throw caution to the wind,” we see the despair isn’t actually over: “My years are not advancing as fast as you think …” He isn’t free – yet.

The problem is: Phil hasn’t broken the biggest “rule” of all: “don’t trust love.” He doesn’t know how to get close to people. It takes a number of slaps in the face on this Groundhog’s Day he keeps repeating – to figure out how.

Stopping Phil: The Groundhog In His Head

Phil Connors has been hurt in the past. There’s no question about that. Now he’s hurt again. He tries very hard to figure out how to make Rita love him. He tries to be a carbon copy of her. That doesn’t work. He tries to find out what she wants in a “perfect man” and to be him. That doesn’t work either. Rita feels she’s being made a fool of – and it leads to one slap in the face after another.

What is love and what isn’t? That’s what Phil has to learn. The problem is: he doesn’t believe he’s lovable (“I don’t love myself; I don’t even like myself,” he whispers one night as Rita sleeps. He also whispers: “The first time I saw you, something happened to me … I knew I wanted to hold you as hard as I could. I don’t deserve someone like you.”)

Somehow, though, when she wakes up, he’s done something “wrong” again and gets another slap. No wonder he’s built an “I could care less about you or anyone else” shell of self- protection.

Phil falls into deep despair. The Groundhog voice has him in a stranglehold. He can’t take Rita’s rejection or the way he’s still stuck; and he feels he’ll never get out. He’s also pretty angry.

He wants to get back at Rita in all his old negative ways, making her feel just as terrible as he feels: “I’ll give you a prediction about the weather … it’s going to be cold. It’s going to be gray. And, it’s going to last you the rest of your life.”

Yet, he’s really talking about himself. This is how Phil’s always felt. Depressed and left out in the cold. He expects the cold shoulder. He believes, deep down, that he’s not good enough. Phil, the Groundhog voice, tells him so.

Phil’s in the rut of: “There’s no way this (loveless) winter is ever going to end.” And, it won’t – as long as this Groundhog in his head keeps on believing there’s a shadow of rejection cast over his whole life. This voice of negativity has to be stopped.

But, how is he going to do that? Trying every which way to kill himself and Phil the Groundhog – isn’t the way out. He wakes up in the same rut every morning at 6 AM to “I Got You, Babe.”

Think again, Phil, maybe there’s a clue here. Sonny and Cher’s song is all about trusting love. Maybe you have to stop taking that negative Groundhog’s advice to: “Kill all longings for love.”

What Love Is And What It’s Not

When Phil wakes up without Rita again the next morning to: “I’ve Got You Babe” (after trying to smash the clock) … is this February 2nd going to be different for Phil Connors? Stuck with Phil, the Groundhog in his head, he doesn’t learn easily. He steps in the same deep puddle; again and again, before he remembers it is there. So, what does it take?

Well … in the process of trying to figure out how to get Rita’s love (and tolerating quite a number of slaps in the process), Phil does learn something valuable. He learns to “get inside a kind person’s experience.” He learns to be kind – and not in a “faking it” way.

Finally, Phil Connors becomes deserving. He embraces music and poetry because he wants to (not because Rita likes them). He learns to play the piano. We might say – he learns to live with a full range of emotions. And, it feels good.

Phil learns to love people; to help and even save people – and in the process, he saves himself from the Groundhog voice in his head. The voice that says: Stay inside, don’t venture out. The world is a cold, cold place. Phil learns that if he opens up and gives – the world can be quite warm.

So … Phil takes the risk to love. And, Rita invests in him. Hey, it may only be $339.88 to “buy” him at an auction of all the eligible bachelors in Punxsutawney, PA. But, it really means that he is finally available. He’s open, he lets himself love her – really love her. And, Rita loves him back.

Ok, so it’s kind of a fairy tale ending. But, real-life can be that way sometimes. It just takes remembering the words to “I Got You Babe” and getting those negative Groundhog voices out of your head. The ones that close you down; make you think you aren’t good enough and stop you from love – or hope that things can and will change.