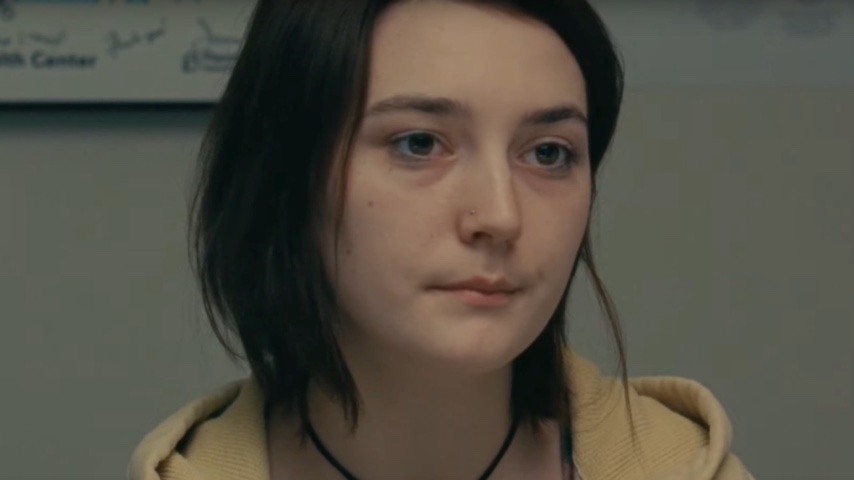 20 Aug NEVER RARELY SOMETIMES ALWAYS
Secret World Of Sexual Abuse
Is There Someone to Reach Inside My Pain?

Watching Autumn’s cautious troubled face in the quietness of Never Rarely Sometimes Always draws us into the dark shattered life of a traumatized girl. If she’d let us in. Autumn lives behind walls. Alone. Vigilant. Angry. Always afraid. Can’t allow help: “I’ve got it.” People aren’t to be trusted. That she’s learned. If you think Eliza Hittman’s captivating film is only about teenage pregnancy and abortion, that’s not the whole story. By far. Never Rarely Sometimes Always reveals a world of secrets and terror. Of sexual abuse. A lonely world with no one to reach inside the pain. Or is there?

No One To Turn To, No One To See

Autumn (Sidney Flanigan) sings a song as Never Rarely Sometimes Always begins. In the High School musical revue; exposing more than meets the undiscerning eye: “He makes me do things I don’t want. He’s got the power of love over me.” Who is that he? The boy who yells out: “Slut?” Or, think again. Her stepfather, Ted. (Ryan Eggold.)

Besides. There are intimations. One, after the performance, her mother (Sharon Van Etten) needling Ted: “Your mother wants me to tell you how great you are.” Autumn gets up from the table, abruptly walks away, hardly beneath her breath, says: “Eat shit.”

At home, he’s playing with the female dog, stroking her: “Good girl, good girl. Yes, you like that. You little slut.” Autumn’s mother yells: “Stop.” But, he replies, “What?! She likes it. Look how easy she is …” Autumn eyes him, from another room. It’s clear. He’s molested her. Worse, her mother doesn’t see. Swollen belly, nausea. And, all.

Autumn hides it. All the evidence. Most sexually abused children do. Threatened (probably by him). Terrified. Filled with shame. The film masterfully creates the same camouflage Autumn must weave around her. There’s no other protection. At home. Anywhere.

The worst thing for a child is having no one to turn to for help. No one to trust. Being all alone. Handling things too big and too hard for a child or teenager to manage.

That’s Autumn. She’s pregnant, can’t tell her mom, living as she does in a conservative blue-collar small Pennsylvania town. She’s alone. And, then there’s her stepdad.

There are good reasons for walls. When it’s not safe at home. And, your mom pays more attention to the younger girls. So tired and preoccupied she’s not there, even if she is.

No help at a clinic in town either. Where Autumn’s made to feel she should be thrilled to be carrying a healthy fetus. She’s not. And, she’s shown a video that calls abortion murder. No help. Anywhere. Alone and numb, she tries to self-abort.

When it doesn’t work, she researches how to get an abortion as a minor. On a bus to NYC with her supportive cousin, Skylar (Talia Ryder), no one knows where they’ve gone.

Young, inexperienced, naïve, and scared, NYC is hard to negotiate alone. It’s a time you need a mom. Sure, she comes to your shows. Tells you, you’re great. But she doesn’t protect you, even when things are going on in her own house. And, she asks you if she should call the doctor when you’ve been sick for months. What kind of mom is that?

Yes, you’re on your own. That’s the way it’s been. Maybe always. And, you wish you could call her for money when you’re broke in NYC, scared out of your mind. You try. She sounds worried about where you are. But you can’t trust her. So, you hang up the phone.

How can you even think about telling her anything? She wouldn’t understand. Would probably judge you. Or, freak out. Or tell your stepdad. Skyler? She’s great. Always there. She’s with you now. But those walls have been up for such a long time, you can’t say a whole lot. About what’s really going on. Or, about your feelings.

Or, that it could be Ted – your stepdad – who got you pregnant.

Yes, there are good reasons for walls. For keeping people out. You can only trust yourself. Learned that long ago. You have to stay detached, shut your feelings down. Go numb. Not want anything.  Say you’re ok. You’ve “got it.” Even broke, with nowhere to stay in a pretty scary and strange city. You’ll figure it out. Can’t take anyone’s help.

You have to be suspicious of everyone. You learned that long ago too. Sure, you wanted your step dad’s love. Like his real daughters. But, look at what he’s done to you. And, you can’t tell anyone. That’s how alone you are. That guy, Jasper (Théodore Pellerin), on the bus? That nice (maybe?) counselor at the clinic? Both offer help. No, thank you. You’ve got it. That’s all.

It can wear you out. Taking care of yourself. Scared of the city. Skylar disappears with Jasper for a bit. Wow, that made you desperate inside. How could you spend the night really alone? Even though you always feel you are. You find her, behind a pillar, kissing Jasper. Reach around and touch her hand. She entwines her fingers with yours.

You stay tough though. Don’t let on that you need too much. Always say “I’m ok now.” Quicker than you are. And, never let on that you’re in pain. Or bleeding. That night after the first part of the abortion, when they dilated your cervix. Waiting for tomorrow.

There are scary things around. Have to keep your eyes open. Protect yourself from danger if you can. Skylar makes you laugh a little, in the subway bathroom after games in the arcade and staying up all night (no choice.) A “French whore bath,” she calls it. And feeding each other pastries. That’s good. But you can’t tell her how you really feel.

Feeling Alone Even When You’re Not

Yes, Skylar’s there. Always has been. She’d do anything for you. But you can’t even let her in. Can’t let your guard down or you might crumble. Be tough. You have to. If you count on anyone, they might let you down. That’s the way it is.

So, you’re alone. Even when (maybe?) you aren’t. That counselor, Kelly (Kelly Chapman). Maybe she’s ok? You told her you “had it covered” last night for sleeping; even when you didn’t. But you did let her be there for the procedures. Hold your hand. Stroke your head. Like your mom should. You let Kelly do that.

There’s a limit though. She starts asking questions. Tells you, just answer: Never Rarely Sometimes Always. Ok? You do. But, some of those questions? They almost make you cry. Especially when she asks: Has someone hit you, slapped you or physically hurt you?

And, even more: “Has your partner made you have sex when you didn’t want to? Has anyone forced you into a sexual act, ever in your lifetime?” Yeah. That’s all you can say. The tears come, even though you fight them. She says she wants to help. Make sure you’re safe. But, no one can be trusted. So, you won’t say more.

You can call her at any time. She says. You probably won’t. Secrets. They’re supposed to be kept. You could be hurt. If he ever found out.

So, you’re alone. Even though – maybe – you’re not. Are there really kind people in the world? Adults? Like Kelly? Makes you feel there might be people who could understand.

Is There Someone to Reach Inside My Pain?

You’re ok, now. With Skylar’s help. But, she’s just a kid too. And, it can even be scary with her, when you think you’ve made her mad.

Like when you had to use all the money for the abortion. You had to say she could go home if she wanted. What if she left you first? You couldn’t let her know you needed her. Too used to asking for nothing. Anyway, it’s your fault you didn’t have bus tickets home. So, you got mad. Those walls, you know. Told her to “fuck off.”

But you didn’t mean it. You have to lie so much. Tell Jasper you just do “normal things” at home. Even though your life is anything but normal. He’s a nice guy. Likes Skylar. She can let people in. So, he gives you money for the bus.

But there might be kindness, you think. Maybe. In some people.

Skylar tries. Asks how it was. The abortion. How you feel. Were they nice? Nice enough, you say. You can’t tell Skylar about Kelly. Holding your hand through it all. You feel lighter though. Can laugh a little. But it doesn’t take reality away. Of Ted. And home.

On the bus, thinking about it all – you wonder, though. Maybe, just maybe, “someone’s here to reach inside my pain.” Just maybe. There is someone who might understand.

I’m Dr. Sandra Cohen, a Beverly Hills and Los Angeles psychologist, and psychoanalyst. I specialize in working with survivors of childhood trauma and sexual abuse. Are you still suffering? Call now. I’m here to reach inside your pain.