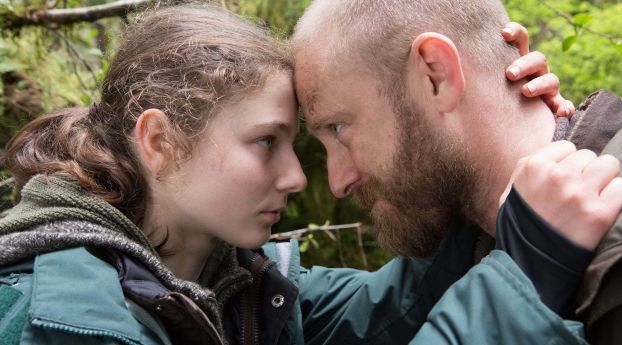 21 Oct LEAVE NO TRACE
What Happens When Trust Is Shattered?

Debra Granik’s Leave No Trace is a story about trauma and distrust. That might not be the most obvious thing in this compelling film about a Vietnam Vet and his 13-year-old daughter who live in hiding in a park forest outside Portland, Oregon. But for me, as a psychoanalyst, it is the film’s heart. Will (Ben Foster) has PTSD from a war we should never have fought. He’s witnessed killing. His wife died long ago. We can well imagine there is much more to the story of Will’s life. People have shattered his trust. We see the results. His daughter, Tom (Thomasin McKenzie) is his only fragile connection. We see how he must disappear from life. We see how dangerous this is for Tom.

People live in hiding in many ways. Mostly it’s psychological, and it is for Will too.  But, this hiding is usually not so literal as the way Will hides, taking his daughter along with him.

The question is: why must someone disappear from life? The film doesn’t really answer that question, but it does develop the characters of Will and Tom enough for me to take off from where Leave No Trace stops.

As we watch the film, we witness certain things plain and clear. Will hides evidence of his and Tom’s existence. He moves their campsite frequently whenever there is a threat. Does his best not to slip up. He’s diligent about covering their tracks.

In some ways, Tom wants to be found.  She’s lonely and scared. And, one day they are. To Will’s upset and dismay. Yet, the real question is …

What Is Will Hiding From?

Will is hiding from needing anyone or anything. He wants to live a completely self-sufficient life. Living on almost nothing. On the land in Portland; by his own wiles and internal resources. Except, we see, he does need his VA pension. They owe him for what he sacrificed. That’s all he’ll take from anyone. He truly believes that he needs no one. He has to.

Will puts all his emotional needs into hiding. He doesn’t feel them, therefore, he doesn’t “have” them; he’s convinced of that. Nor should Tom. She should need no one but him. They will need no one but each other. It’s a closed system in Will’s mind; a safe one.

He can’t even admit, though, how much he needs Tom. He’ll be everything to her – and he’ll do it well (everything I think we can assume, he did not have). He’ll be father, teacher, mother – friend.

But as much as he teaches Tom survival and self-reliance, he also tries (not so successfully) to teach her not to need anyone and not to trust.

He teaches Tom to leave her feelings behind, just as he’s crafted his own skill to do that all too well. It’s called dissociation in psychological terms. It comes with the territory of trauma.

But, Tom does have feelings. When she goes to school at the farm camp after they are found in the park by the authorities and taken into custody, she asks Will: “Why do the kids think I’m strange? Because of the way we were living?”

She’s fighting back tears. His reply does not at all take into account how she feels: “How important are their judgments?” They are very important to Tom.

Will is a good father; he’s taught Tom that she can trust him. By extension, that would mean that maybe there are other people to trust too. And, Tom is cold and lonely and tired of living on the run; outside in the woods; without any of the niceties and comforts of people and life.

She likes it when they are caught; and when they finally “have things.” She likes making friends. All Will can say to her is: “those things were never ours.”

He can’t take from anyone. Nor does he want what people have to give.

Why Can’t Will Take From People?

To Will, taking is dangerous. In his mind, people don’t give freely; they just want to take away. That’s what he believes. And, that belief must be founded on some early experience of people who weren’t there, who deprived him or abused him; or used him for their own needs. When people offer something, it must be a trick.  And, he looks for those tricks everywhere.

So, at the farm, where the authorities take Will and Tom, he knows people are watching him. He feels their judgment; their suspicion about what he’s been doing living on state owned land.

And, they don’t sensitively try to find out who he is, or what brought him to this point in his life. They don’t try to win his trust. Nor do they see how broken he is. Mostly how frightened.

They don’t seem to care. He’s expected to adapt to their system; work for his keep – and it has nothing to do with him or what he feels or what he needs. I’m sure that’s how he’s always felt.

He knows these people don’t trust him, so how can he trust them? Escaping is the only answer. He and Tom slip away.

Tom says: “I liked it there. Did you even try?” To which he replies: “They were going to separate us if we didn’t follow their rules.”

The authorties were trying to take away everything that matters: Tom and his independent life.

On the run again, they end up in colder and colder country. This coldness is Tom’s deprivation; it’s the way she is beginning not to trust her dad. Will is so scared of people that he can’t any longer think about what Tom needs or how she’s starving for friends and contact with people.

As Will tries to get farther and farther away from the authorities, they find an unoccupied cabin, in the Washington State woods. The pipes are frozen. It is barely livable.

When he leaves Tom one night to gather kindling, she feels as deserted as the cabin. Looking through their stash of important papers, she finds Will’s psychological test results from after they were taken into custody: “Are you unable to enjoy things? Do you feel distant or cut off from people?”

There’s a clipping from the paper: “Unit haunted by Vet suicide.” He’s killing both of them with his fear of help and people.

When her dad doesn’t come back by the next morning, Tom is panicked. Is he dead? Has he left her? Terrified, she runs to look for him and finds him lying still; hurt. She desperately runs to the road to look for help.

Help scares her too. And when a kind man, once a Medic, tells Tom that Will needs a hospital, she refuses. She’s her father’s daughter: she wants to take care of it herself.

Then again, she can’t. She’s too young. And, she’s too tired of the fight. The Medic ministers to Will’s wounds and his community takes them in.

But, can she trust these people?

What Does It Take To Trust (Or Not)?

Tom wants to trust people. These people, living on the land in an RV park, not so very different from Tom and her dad, seem kind. They seem to care.

For a hungry, lonely kid, how much is too much to take? The woman/mother/matriarch gives them an empty RV to stay in while Will heals. Tom gives in return what she can. She makes friends; grows comfortable.

But, it’s the kind woman Bee Keeper who gets to the heart of the problem. She teaches Tom about trust.  Even bees can be trusted. She doesn’t have to wear her protective garb, if she understands about the bees:

“If a bee stings you, they die. They don’t want to die; they just want to get to know you. It means a lot that I have their trust. I worked hard to get it.” How easy will it be to win Tom’s trust?

Not too hard. She’s hungry for it. She wants it for her dad, too, and tries to teach him how to trust the bees.

For a broken man like Will, trust just isn’t in the cards.

Will’s self-protections have been in place for a very long time. He can’t give them up; not his wariness; his distrust; or his fierce self-sufficiency. These protections are his friends. He truly believes that; better friends than anyone else in the world. Those he can depend on. People he can’t.

For Will it’s too dangerous to trust. He’ll give anything up to keep these familiar self-protections. Even Tom.

How Not To Repeat History

Tom isn’t her father’s daughter. Will  has given her something he clearly never had in spite of his history and fears. She wants to live in the world of people. To have friends. That she knows. She has needs.

Will doesn’t. At least that’s what he has to believe.

Will cannot live with people.  Tom paid rent for the RV. They aren’t taking too much from anyone. Yet, Will is like a frightened and caged animal. Barely healed, he must go.

The brave Tom, stands up to him: “you – not me. Same thing that’s wrong with you isn’t wrong with me.” She enjoys things. She doesn’t feel distant or cut off from people. She doesn’t want to be.

Will has lost Tom.