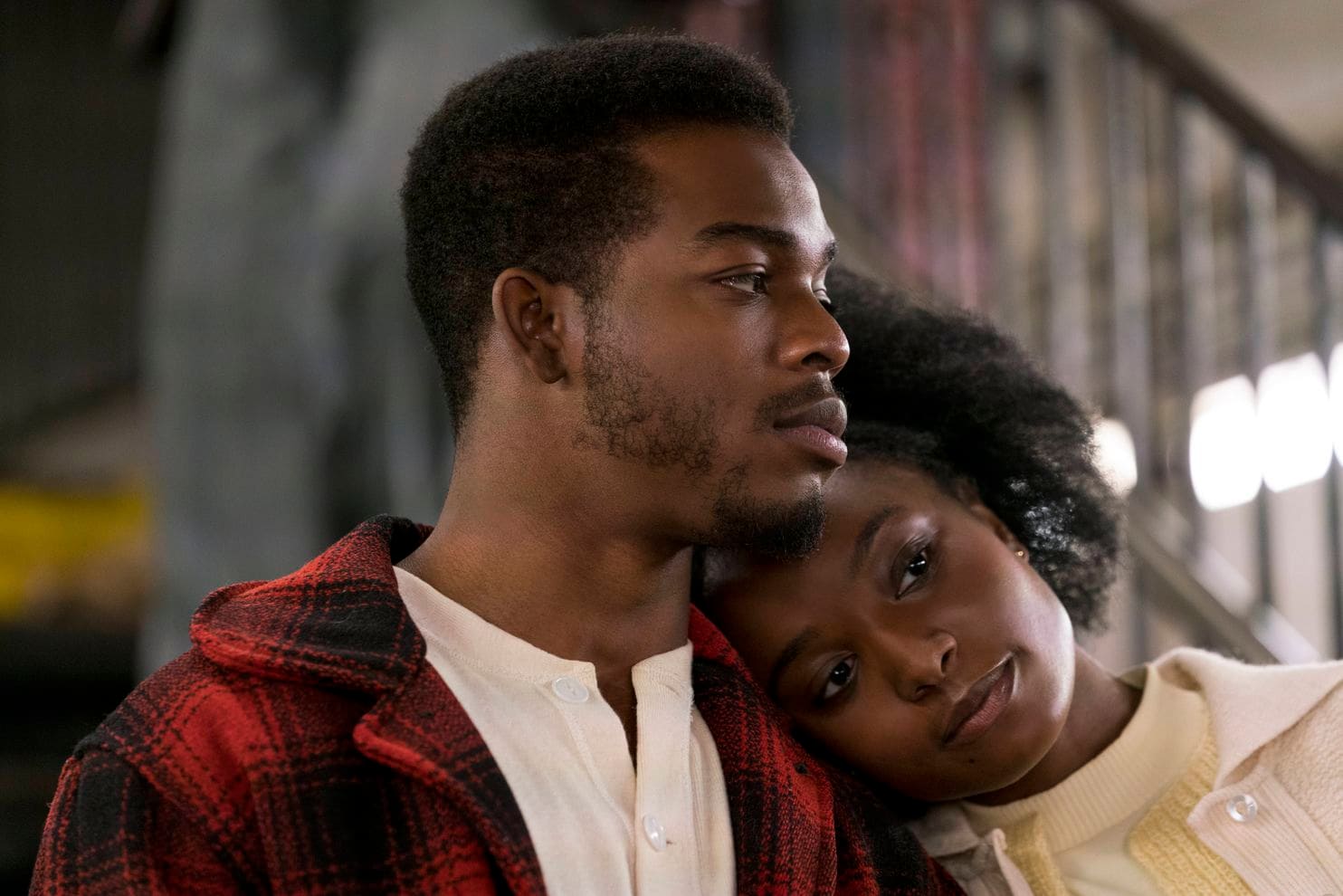 14 Mar IF BEALE STREET COULD TALK
That “I Got You” Kind Of Love
The Best Remedy For Hate, Helplessness & Despair

The River’s family’s “I Got You” kind of love is If Beale Street Could Talk’s most potent reminder of exactly what transcends hate, helplessness, and despair. We see it when Tish’s dad holds her: “I got you, baby, I got you.” When Tish says to her newborn son: “I got you. I got you. I promise.” And, when her Mama soothes her fears: “Love is what brought you into this world. If you trusted love this far, don’t panic now. Trust it all the way.”

Yes, this kind of love is a steadfast love; love that doesn’t run away in hardship. “I Got You” kind of love brings hope when it seems a shadow’s fallen over the sun.

And, a shadow has. Worry is everywhere in Barry Jenkins’ If Beale Street Could Talk. Tish’s (KiKi Layne) fiance, Fonny (Stephan James), is in jail for a rape crime he didn’t commit. Tish and her family are fighting not only this terrible and justified worry. But a rigged justice system, driven this time by the hate of a white policeman’s vendetta.

A Story Of Hate

Fonny is Black. If Beale Street Could Talk is an all too typical story of hate towards young Black men in the ripped fabric of American culture. As James Baldwin put it in his book of the same name: “Beale Street is a street in every American city where every Black person was born. ”

Fonny is only 22 years old. Tish, pregnant and 19, narrates the film: “I hope that nobody has ever had to look at somebody they love through glass.” Tish and Fonny have a special kind of love; a love now unreachable. Obstructed because of living on one of those Beale streets – in New York City.

Tish’s narrator’s voice brutally puts it: “He loved woodworking so much. He found something he wanted to do and it saved him from certain death. Of course, death is very simple. Kids had been told they weren’t worth shit and everything around them proved it.”  Yet, even sweet, gentle, innocent Fonny couldn’t be saved.

Old black and white photos of young Black men splash across the screen. The guns of police pointed at their backs. Now, there’s a cop named Officer Bell (Ed Skrein).

Officer Bell doesn’t like being stopped from arresting Fonny for punching an Italian guy who lewdly accosts Tish in a supermarket. And, Officer Bell hates being humiliated by the Jewish woman store owner that tells him he’s wrong.

He’ll get back at Fonny, that’s for sure. And, when Mrs. Victoria Rogers (Emily Rios) is raped and they don’t know who did it; he makes sure it’s Fonny who is “identified” and charged. Even though it’s too far to run from Orchard to Bank Street. But, “Officer Bell says he saw Fonny.” And, that’s that.

Yet, a cop’s hate isn’t all the hate Fonny’s had to fight.

On top of Officer Bell, bent on proving Fonny’s not “worth shit,” it doesn’t help when his own mother thinks it too. Fittingly (coldly) known only as Mrs. Hunt (Aunjanue Ellis) in the film, Fonny’s mother oozes hate. Everyone is beneath her except her loyal haughty daughters. She hates her husband, Frank. And, she hates Tish too:

Fonny’s mother doesn’t understand a sensitive artistic son who didn’t do her bidding and go to college. Mostly, though, she knows nothing about love. Chillingly, when Tish announces the baby she’s carrying, her new grandchild, Mrs. Hunt hatefully responds:

“I guess you call your lustful activities love. I always knew you’d be the destruction of my son. The Bible says put to death sexual immorality, impurity, passion, evil desire, and covetousness. That child was born of sin and the Holy Ghost will cause it to shrivel in your womb. But, my son, my son will be forgiven.”

The cold hate of a mother cannot be forgiven, though. Or easily gotten over. And, Frank Hunt (Michael Beach) slaps his wife across the face. “I think your body’s still pumping, but I wouldn’t call it no heart.” He’s right. And, Fonny can’t possibly feel he’s anything but “shit” in his mother’s eyes too.

Luckily, he has Tish’s “I Got You” kind of love. And, Fonny’s dad loves him too. Plus, Tish has a loving mother, Sharon (Regina King), dad Joseph (Colman Domingo), and sister Ernestine (Teyonah Parris). And, they love Fonny. They’ve known him since he was a little child. The River’s family fights for him when he needs it the most.

Fonny has a lot to fight. That couldn’t be clearer in one of many scenes in the film, with Fonny and Tish separated by glass. Their only contact two black phones on either side. Once, Fonny desperately yells, crying, “Do you want me to die in here? Do you know what’s happening to me, me, in here?”

Another time, his lip is split. His eye blood-shot and his face bruised. When Tish must tell him the trial is postponed because Victoria Rogers went crazy and disappeared once again, his face falls and he’s the picture of hopelessness and despair. But, still, he holds onto their love and tries to have hope: “I’m fine. I’ll be out of here in no time.”

He knows it’s not true. It’s just like his friend Danny (Brian Tyree Henry) warned him. Recently, also, in jail for rigged charges, Danny told Fonny, crying: “The white man has got to be the devil. You don’t know. The worst thing is they can make you so scared. Just scared, man.”

The gentle Fonny never thought he’d be there too. There are only two things Fonny is certain of in his life: his wood and stone – and Tish: “Without them I’m lost.” And he fights not to feel lost now: “I’m comin’ home to you. I want to be in your arms, hold you in my arms. I gotta hold our baby in my arms. It’s gotta be …”

“I Got You” Kind Of Love

Yes, it’s gotta be, but it’s an uphill fight against the hate of a  legal system that throws every conceivable obstacle in their way. It’s corruption their wet-behind-the-ears idealist young white lawyer, Hayward (Finn Wittrock) has no idea exists until now.

For Fonny, it means a plea bargain in the end. But, as Tish says.”We have to live the life we’ve been given; and live it so our children can be free.

They fight the fight together, with Tish’s mom, dad, sister Ernestine (who found Hayward for them), and Fonny’s dad. And they do it with that “I Got You” kind of love.

Without a doubt, that kind of love is the heart of If Beale Street Could Talk.

It’s a special kind of love, as special as the love Fonny and Tish share. Unquestionably, a kind of love that doesn’t happen very often. One that endures time and hardship and years of separation. Their love began as children and blossomed out of being best friends:

“We bathed together (as two little kids with bubbles and clothes on, happily splashing each other.). There was no reason for shame. We were part of each other’s flesh, which we so took for granted, we never thought of it as flesh. Yet, it was no surprise to me when I understood, he was the most beautiful person I’d seen in all my life.”

The devotion in Tish’s ability to love has grown from the “I Got You” kind of love given to her by her family through thick and thin; always there for each other. Clearly, the root of her strength to endure the “life we’ve been given” and to help Fonny endure the fate inflicted on him too. That kind of love is the only thing that overcomes hate.

Love is there on Beale Street. But, many people on the Beale Street where Tish and Fonny live can’t give love and can’t see the love that’s there. Officer Bell certainly can’t; his hate blinds him. The white blonde prison guard, suspicious and watchful of anyone Black, can’t either.

But, some can. The Jewish store owner that defends Tish and Fonny to Officer Bell knows they are fine young people. And, Levy, who agrees to rent them a flat on the day of the fateful incident at the supermarket, sees them as two people in love; not Black.

When Fonny asks, “What’s the catch? We’ve been looking (and turned away) for a long time.” Levy responds: “I dig people who love each other. Spread the love. I’m just my mother’s son. That’s all that makes the difference between me and them.”

Yes, in Levi’s words, loving mothers (not hateful ones) make all the difference in the world. And so do loving dad’s. Because when love is the “I Got You” kind of love; that love never lets you fall, and backs you up no matter what happens. And, then you can fight for whatever life you’ve been given.  Even to rise above hate and despair.

Not only that. The “I Got You” kind of love brings a certain kind of freedom too. Especially, as If Beale Street Could Talk clearly shows us when you’re fighting blatant lies. Above all, the one sung across America in our National Anthem: “My Country ’Tis of Thee. Sweet Land of Liberty. Let freedom ring.”

Dr. Sandra Cohen, a Los Angeles based psychologist and psychoanalyst specializes in working with people fighting hate and self-hate. She helps to look into any historical (not just external) reasons for obstacles in love.