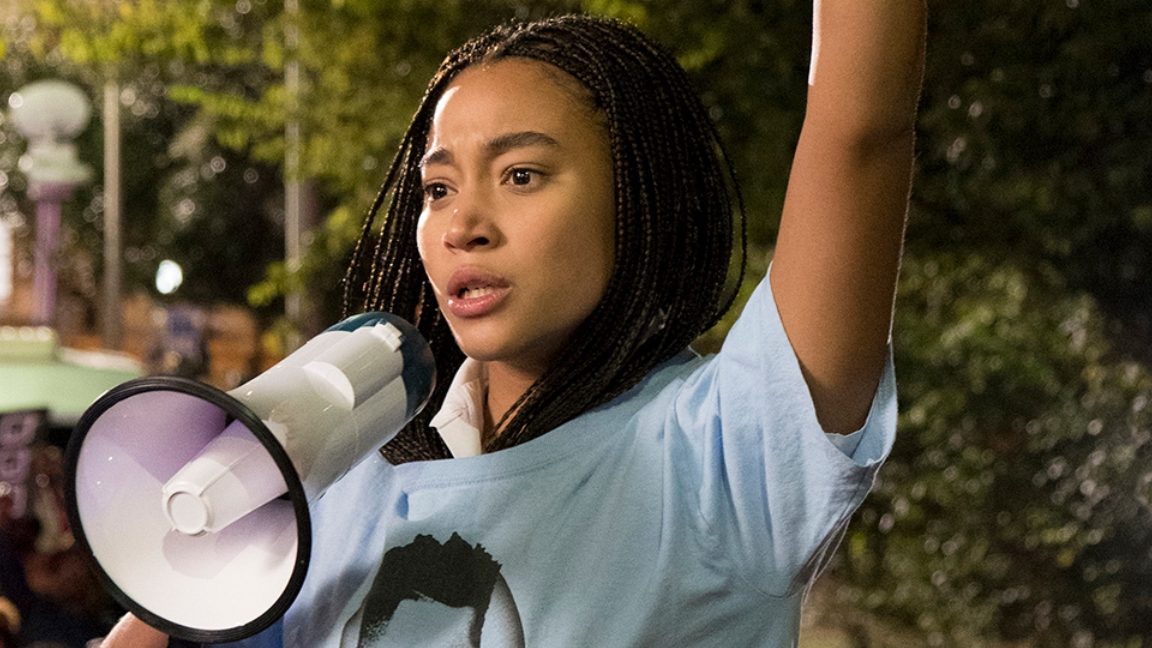 15 Jul THE HATE U GIVE
Hate Yourself For Keeping Quiet?
Don’t Be Afraid Of Speaking Out

The world is filled with too much hate. This piece is in honor of Black Lives Matter. Dedicated to those who’ve spent their lives, like Starr Carter in The Hate U Give, having to hide, needing to code-switch to play it safe (as discussed on NPR’s Code Switch). George Tillman, Jr’s compellingly forceful film offers us a very important set of remedies: Speak Out. Don’t Be Quiet. Don’t Be Afraid To Speak Truth To Power. I’ve re-posted this piece in support of those who are now actively standing up against racism in the form of police brutality. I’m joining those voices in protest.

Hate breeds self-hate. And, self-hate can make you Quiet. That’s one of the things The Hate U Give makes very clear. Amandla Stenberg’s moving performance as Starr Carter makes even clearer just how scary hate and self-hate can be to fight. Especially if people (police, for example) refuse to listen. And, since both hate and self-hate are damaging to hope, we all have to actively fight it where we can. I’m white and Jewish. I’ve never experienced extreme anti-semitism. So perhaps I’m one of those “privileged whites” Starr comes up against at Williamson School. I can empathize. Take action; protest. But I don’t know from the inside what it’s like …

To be Black; poor; live in the ghetto; fight the fight that the people and families in The Hate U Give live every day of their lives. I am a psychologist and psychoanalyst though. I specialize in early trauma; PTSD; and situations that lead to terror. And, rage. I know beyond a doubt that finding a voice to express anger; speak out against unfairness; is the best weapon of all. Especially when that voice is heard.

The talk, no surprise, is about being Black; hated by the police; and what to do if you‘re ever stopped: “Keep your hands where they can see them because it makes police nervous. It can get real dangerous, so don’t argue. This is how you’re going to act. We straight?” Sekani is only one. He’s still a baby.

These are the dangers of speaking out. One of the awful truths about living with hate.  We see what happens to Khalil (Algee Smith). His murder; after standing up for his rights to Officer 115; a man so scared of Blacks, he mistook a hairbrush for a gun. Khalil never had the talk Maverick gave to his kids.

Khalil is the one who told Starr about Tupac and THUG LIFE; not even an hour before: “Meaning what society gives to us when we little comes back to bite them in the ass when we grow up and wild up.”

But, this time; for Khalil, the way he’s been hated (and his defiant anger about it) bites him in the ass instead. And, Starr witnesses the murder; driving home after escaping a “hood” party turned violent. Khalil; her best friend since babyhood.

Quiet, that’s what Starr’s been. You see, before Khalil’s death, Starr’s been living a lie at Williamson (private) School. Where her mom, Lisa (Regina Hall), sends all three kids to be safe from violence at the ghetto High School in Garden Heights. “Where you go to get jumped; high; pregnant, or killed.”

And, at Williamson, she has to be Starr Version #2; because: “Garden Heights is one world; Williamson is another. I gotta keep it separate. Williamson Starr is approachable; doesn’t give anyone a reason to call her ghetto.”

If she’s Black and ghetto, that’s a reason to be hated; and this school is mostly white and privileged. Starr Version #2 fits in; goes under the radar; is popular. Her two best friends, Hailey (Sabrina Carpenter) and Maya (Megan Lawless) are white and wealthy. Her boyfriend, Chris (K.J. Apa), is also white; and wealthy (most of the kids are); but he’s different.

Yet. she’s evasive with Chris; knows her dad won’t accept his whiteness; and doesn’t really trust that Chris will see or understand Starr Version #1, the ghetto Starr; who has lived in danger her entire life; knows it all too well.

Threats Everywhere: Giving In Or Not?

Real-World Threats. Yes, in The Hate U Give; in the ghetto; in Garden Heights; there are very real threats. There are hostile police; threatening Drug Lords, like King (Anthony Mackie). It’s hard not to take King seriously. He wields a lot of power.

Maverick was under King’s influence once and did time for King years before. Khalil was also under King’s sway; drugs being a way to make money when you’re poor. And King has a lot to lose if Starr testifies. His reign in Garden Heights could be over; he’s not about to let that happen.

Threats In Your Mind. Bullies/threats/and fear-mongers/exist in your mind too. We could venture to say that King also stands for a mental gang-lord. One that says: “Shut up; be Quiet; or I’ll show you what will happen if you don’t.”

When he’s threatened, King fires shots through the window of the Carter house: “Tell Starr to keep her mouth shut; damn bitch.” He tells Maverick that she better; if she knows what’s good for her. Starr has the same loud voices going on inside her mind.

Keeping Quiet: & Hating Yourself For It

Yet, what if she does keep Quiet? What does that mean for Khalil? What does that mean for her? She’s already given in to mental fears and threats by becoming Starr Version #2. And, also when her friend Natasha was killed by a King Lord; when they were only 10. She witnessed that too. Snitch rules applied. So, she kept Quiet. Is she going to do that again?

She’s “the Witness;” the only one. In fact, she’s being courted to testify before a Grand Jury. After Khalil’s murder, Starr’s no longer the old Starr Version #1 and she’s certainly not Starr Version #2 either. She’s shaken up. She’s sold herself out to be popular; to have friends; to be safe. But, the worst thing of all?

“I hate myself for it.” And, hating yourself isn’t good. It comes with its own set of problems. With worry about being discovered; constant fear of judgment; and anger at what you’ve had to become.

Sure, she’s been scared she won’t fit in; but self-hate and fear get old fast. They wear you down; they hold you back. With Khalil’s murder; Starr’s having a hard time holding up her self-hating pretense at Williamson School.

And, the ghetto Starr; the Garden Heights girl; who loved Khalil;. is torn in two different directions: 1. by the fear that tells her to stay Quiet. And, 2. by her anger at injustice; the senseless murder of a defenseless boy; with only a hairbrush.

Breaking Free: From The Hate U Give

Fear is debilitating. And, here’s where the Grand Jury comes in. Will she or won’t she testify? Her mom is on the side of fear; believing it safer to be Quiet. But, her dad and April Ofrah (Issa Rae) help her break free. April wants Starr to testify. Khalil can’t speak for himself.

April Ofrah, the community activist and lawyer for Just Us For Justice, says this: “The police have no intention of charging the officer. Even though there’s a credible eye witness. Here we are again. Another unarmed young Black man. Shamell Bell said it best: ‘It’s impossible to be unarmed when our Blackness is the weapon that they fear.’”

The real weapon? A Voice. Plus, the name Maverick gave her: “Shine your light. I didn’t name you Starr by accident.” It’s her superpower. And, her dad gives her permission to use it.

She begins when King threatens her; Maverick goes after him. The police come and brutalize her dad; Starr films it on her phone; something she couldn’t do when Khalil was killed: “I have a right to record. this.” And. when the police realize she’s “the witness,” they back off.  But Starr sees how scared Sekani is: “Daddy, this is all my fault. I should’ve stayed Quiet.”

Her dad will have none of that. Angry at how he’s been treated; and what his kids witnessed; he makes all three line up and quote Rule #7 of the 10-rule Black Panther program: “We want an immediate end to police brutality and the murder of Black people, people of color, and repressed people.” “By what means?” “By any means necessary.”

“So why you gonna be Quiet? …. when you ready to talk, you talk. Don’t ever let nobody make you be Quiet.”

A Voice. The Real Weapon. No More Quiet.

Starr really starts to get her voice after the Grand Jury doesn’t indict Officer 115. Despite her testimony. Sure, she spoke out. But sometimes people refuse to listen; that incites frustration; and rage.

“If 115 had traded his weapon for this one; Khalil would still be alive. My name is Starr and I am the one who saw what happened to Khalil.  I am the witness. But, so are Y’all.  We are all witnesses to this injustice; we see it all and we will not stop until the world sees it too … Everyone wants to talk about how Khalil died. This isn’t about how he died. It’s about how he lived. Khalil lived. His life mattered! Khalil lived!”

Yes, having a Voice; a Megaphone; wields more power than a gun, or threats, or killing someone. And especially, more than having to be Quiet.

A Right To Anger. No More Self-Hate.

These are the things that help:

1.  A Dad that gives Starr permission to speak out.

2.  Testifying at the Grand Jury for Khalil.

4. Not being someone she’s not.

5. Standing up to racism (even in a supposed friend).

Ok, the Grand Jury does not indict Officer 115; he goes free. But, in her anger; Starr gains freedom too.  Unlike the Officer – a freedom she deserves.

Starr, at the end of The Hate U Give, has an Afro. No more, long braided hair extension dreadlocks. She’s herself; Hailey (after her racist comments) is no longer her friend. Maya is, though, and so is Chris. People who see her; the true her; not Starr Version #1 or Starr Version #2. Just Starr.

Yes, speaking out wields more power than a refusal to listen. Not being heard is frustrating; certainly provokes rage; it can incite violence. That is THUG LIFE. Yet, there are people that will hear you and have your back. Look at Starr’s dad, Maverick. And, her boyfriend, Chris.

But, even better; you can use your Voice. That’s your most potent weapon. And, if you do, you will stop self-hate. And, just as importantly, you’ll add your voice to those who want to end the poisonous infiltration of hate in our world today.