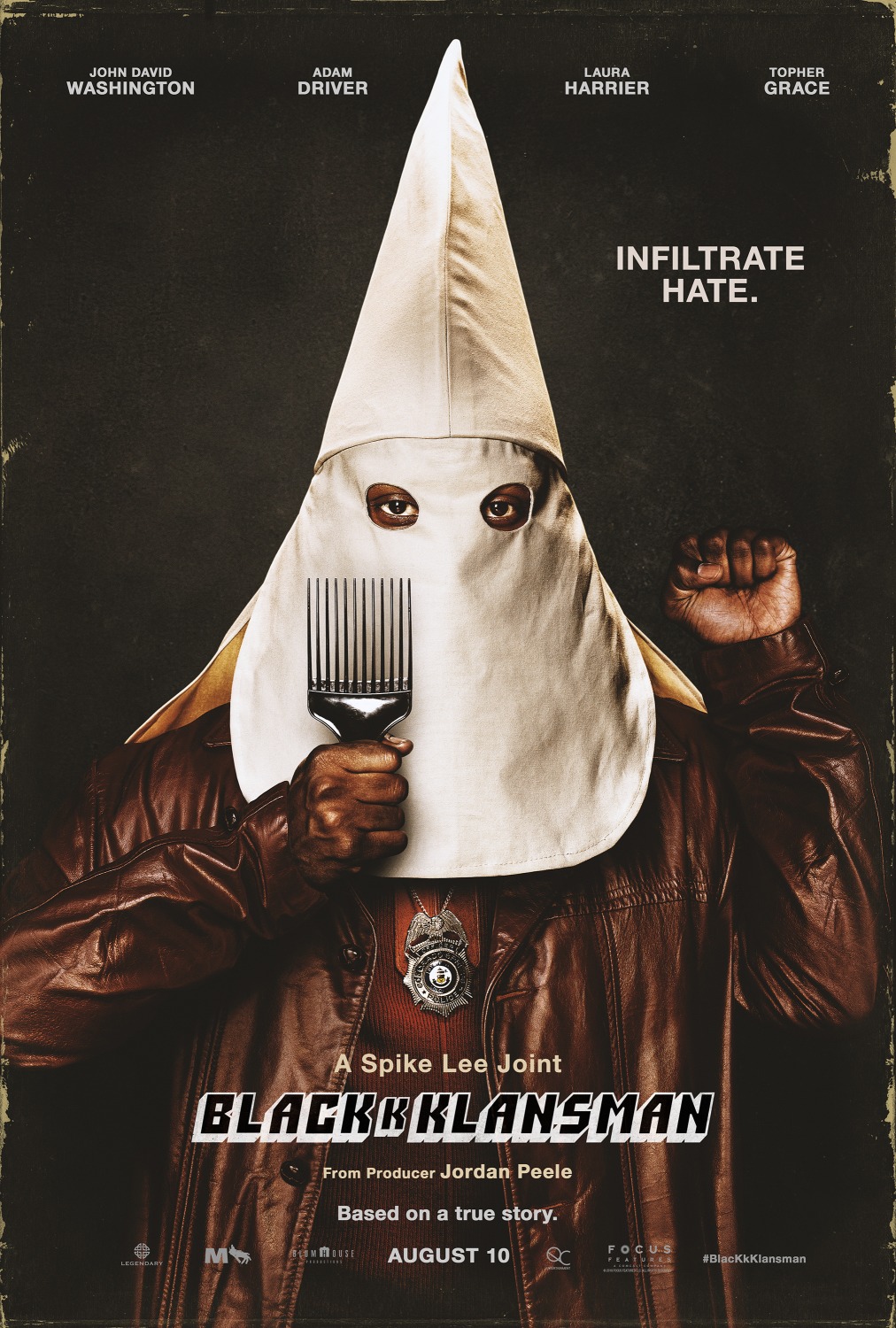 BlacKkKlansman takes hate seriously. Lee masterfully juxtaposes the haters and the hated to expose the insidiousness of hate. This is the film’s overarching intent. And, Lee succeeds. He recruits us to join in fighting hate’s power. Certainly, in light of the emboldened voices shouting “White Power,” we must.

Highlighting the chilling beliefs of “White Power’s” haters, BlacKkKlansman begins. The face of a fictionalized white supremacist, Dr. Kennebrew Beauregard (Alec Baldwin) fills the screen. He rants against the Supreme Court’s 1954 Brown decision; the decision that put an end to public school segregation. With his words, Beauregard tries to fuel the fires of hate:

Beauregard hates Blacks. He hates Jews. He hates anyone who isn’t as white as snow.

The hated need a voice. And, to the hated, BlacKkKlansman quickly moves. But, we also see the forces against their empowerment. Those forces are tenacious. They’re oppressive. Worse, they don’t stop. They historically repeat again and again.

Stallworth, as a newly appointed undercover detective, is told by Police Chief Bridges (Robert John Burke) to monitor the reactions of the students:

“As a former Black Panther, [Carmichael] is the greatest security threat to us. We don’t want him getting into the minds of good Black people.” Equipped with a hidden mic, Stallworth wants to do his job. He’s idealistic. But, he’s also Black.

Spike Lee emphasizes Stallworth’s internal conflict with a fictionalized love interest, the President of the Black Student Union, Patrice Dumas (Laura Harrier). She’s a strident Black radical. She thinks cops are pigs. He hides that he’s a cop, at least for a while.

But, he listens to Kwame Ture and he hears his message loud and clear. Stallworth is clearly torn.

A Lonely Place To Be

The clear impact of Stallworth’s identification with being one of the hated, comes later in the film. In a poignant and powerful scene, we see Ron Stallworth remembering Ture’s message and what it means to be Black.

He and his partner Flip Zimmerman (Adam Driver) are well into their plan to infiltrate the Colorado Springs chapter of the KKK and to dig up information about their hate activities.

Complicated by Stallworth’s error of using his real name to “apply for membership” in the KKK, Zimmerman must pose as the “white Ron Stallworth.” He’s just finished shooting practice with members of the Klan. The real Stallworth is stealthily tracking him to take photos for evidence and to be certain he’s safe.

We see Stallworth walk in remote terrain as he carries his camera. He walks the hidden area the KKK uses to master their shooting skills. Abruptly, he comes upon a line-up of African/Black figures in running positions. They are the KKK’s targets. He is their target too.

This is a lonely place to be.

Ture’s message rings in his mind. This message isn’t about violence. It’s about empowerment with a new way of seeing: so that the hated don’t believe the haters.

As Patrice tells Ron after Ture’s talk: “We shouldn’t have a war going on inside; we should just be ourselves.” That isn’t easy.

Ture’s message, which speaks for the Black Is Beautiful movement, is about conquering self-hate. Self-hate is the most devastating consequence of being hated. Ture tells his mesmerized listeners:

“It’s time to stop running from being Black. You must define beauty for Black people. That’s Black Power. We are Black. We are Beautiful. If we want to be like whites, who hate us, we then hate ourselves because we feel ashamed of our heritage. It’s time to reject the shaming effects on Black minds.”

Hate gets inside. The hated hear the voice of the hater. It lodges itself in their minds, becoming the voice of self-hate. That voice must be challenged. It cannot be seen as truth – because it’s not.

Hate that tears others down is never “fine.”

Ture says in his speech: “If I can’t be myself, then what am I? All power to all the people.” His is a uniting message. Hate divides.

This is what Spike Lee tells us in BlacKkKlansman: Ron Stallworth’s story is the story of now. Now, in 2018, white Supremacists and their hate are being empowered. We can’t let that happen.

BlacKkKlansman takes us along with Ron Stallworth as he exposes the KKK’s activities, at first with the support of the police force. But, ultimately Chief Bridges chooses to suppress the evidence. In the 1970’s, in Colorado Springs, the forces of hate are once again allowed to go undercover.

Yet, we get the message if we are listening. And, above all – if we see.

A plot by the KKK to murder the Black Student Union President, Patrice Dumas.

92-year-old Harry Belafonte (playing Jerome Turner) telling the story of the brutal torture and lynching of a teenage boy named Jesse Washington in Waco, Texas, in 1916.

Footage of the University of Virginia demonstration where Heather Heyer was killed in 2017 – run down by white supremacists as she protests against them.

Soul murder – when self-hate gets inside those that are hated.

Trump’s face saying his now all-too notorious words after the University of Virginia tragedy: “You also have people who are very fine people.”

BlacKkKlansman is a message to all of us. We cannot give in to forces of hate; forces that believe some people are better than others. We cannot allow Trump or Duke’s politics to become another forum to “sell hate.”

Heather Heyer’s face appears on the screen.The film’s last image. Under her photo, Lee has inscribed these words: “Rest in Power. There Is No Place for Hate.”