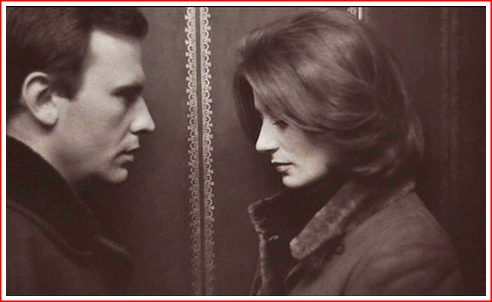 Even beautiful love stories have their complications when grieving for an old love isn’t over. Claude Lelouch’s captivating film A Man And A Woman 1966 has a lot to say about what it takes not to turn away from a new chance to fall in love. It’s in the story Jean-Louis tells Anne early in their meeting when they see an old man walking with his dog. “Do you know Giometti, the sculptor?” he asks her. “If there was a fire and Giometti had to choose between saving his art or his cat, he would choose life, not art.” Choosing life, that’s the answer. And, no, it’s not an easy thing to do. A Man And A Woman tells us why. And, also – what can help.

Grief. Loss. Sadness. That’s the unspoken backdrop to A Man And A Woman 1966. Well, there’s a hint at grief as the film begins – when Anne (Anouk Aimee) tells her young daughter Francoise (Souad Amidou) the story of Little Red Riding Hood. Playfully gobbling Francoise up, as the wolf (not so playfully) gobbled up Little Red Riding Hood, Anne asks Francoise: “Do you like the story.” Francoise replies: “No. It’s sad.”

There is sadness. Francoise’s comment foreshadows the unfinished grief that casts a fog of darkness over the film. A Man And A Woman, notably, isn’t shot in color. Except in fleeting moments that seem to illuminate bursts of hope that shift between the man and the woman. Yet can’t be sustained when fears of loss take over.

Yes, grief can gobble you up. Want you for itself. Kill life. Taking another chance is terrifying. Loss sneaks in, enters when you’re unaware, invades the places where you try to have a life again. In those moments, when you’re drowning and don’t know how to survive, all you want is that old love back again. Just like Anne.

Anne is The Woman. Jean Louis (Jean-Louis Trintignant) The Man. We meet him with his little boy, Antoine (Antoine Sire). He too is loving and playful. Driving crazily on the sand, laughing. Antoine and Francoise are at the same boarding school – and, they’re little. Separated from their parents – and, it turns out, for each of them, the only parent they have.

Saying good-bye to their children after a weekend visit, Anne misses her train. Jean Louis drives her back to Paris. They’re drawn to each other, but this is no simple love story. Both wear wedding rings but carry the deepest of losses. Of a husband and a wife.

A Woman: Lost In The Past & Living In Retreat

They talk. Smile as they drive along. Their first meeting. Both lie and say they’re married, not yet able to be vulnerable. Anne talks about her husband, a stuntman as if he’s still alive. Remembering him in vivid images of love. Jean Louis says: “He sounds like a God.” “For me, maybe.” He asks her to drive with him to Deauville next weekend.

He’d like to meet her husband. She – cocooned in her remembering – is jolted by a flashback to a violent explosion as Pierre re-takes his stunt. Brought back to reality, Anne admits: “he’s dead.” There’s attraction between this man and this woman, yet she isn’t finished with her grief. Jean Luis isn’t ready to open up yet either. Doesn’t tell her that his wife is dead too.

So they dance around their attraction. At his request, Anne gives Jean Louis her number; tells him to call, but says she’s not sure she’ll be free. She isn’t. A woman absorbed in her past. Still living with the memories and longing for what she once had. The searing pain of a great love lost. Reaching for it, retreating into it. Not wanting to let it go.

Grief takes time. Has its own path. Must be felt. And, faced. If it’s not, as we bear witness to in Anne, life isn’t lived in the moments that exist. Instead, terrified, she turns away from something that could be real. Is near. Not ephemeral. Might be touched, if she reaches out her hand.  She can’t.  Afraid of being left again.

Grief takes many forms. Some who are left in grief live in retreat. a removed, shut down kind of cautiousness. Guarding against sadness that could seep its way into your pores. Like Anne. In his own way, Jean Louis is scared too.

A Man: Running From His Loss Until He Stops

Anne retreats. Jean Louis runs. Engaging in a meaningless affair. Driving fast and dangerously in his race cars. Don’t feel, is the motto – until suddenly the memories are upon both of them. Sometimes the desolate desert of sadness in grieving is too much. What do you? Shut it down? Or feel it so you can choose another chance at love. That is the 60 million dollar question.

Jean Louis does drive Anne to Deauville that next weekend. And, on the radio is a melody “called love.” They could fall for each other. The attraction is clear. But, the radio warns: “We’re in for a stretch of bad weather. Stay home. The roads to the country are flooded.” They drive anyway. Brave souls. At this moment, not running and not in retreat.

Yet, the warning is real. They spend the day together with Antoine and Francoise – already friends from school. The children’s joy brings them closer. Food. A boat ride. A man and his dog. The story of Giometti, the sculptor – who chooses life.

Can they? Their “choosing” isn’t so easy.

Losses threaten. When Jean Louis takes Anne’s hand, she says: “You never speak about your wife.” His flashback shows us why. There was a terrible crash. His wife was in the stands, just as Anne saw Pierre’s deadly accident. Jean Louis didn’t die, but his wife couldn’t bear the seriousness of his injuries; her fear he wouldn’t make it. She took her own life first.

Grief complicates new love. And, Anne and Jean Louis are falling fast. Yet, they carry their pasts as scars of the battles they’ve already lost. As warnings. Tread this new territory cautiously or not at all, the voice of fear might say. They move towards each other, but with a wary distance.

They stay in one another’s thoughts. Living life in parallel. He’s racing a Mustang in black and white. She’s directing a film in color. Anne tentatively makes a move against her fear, sending Jean Louis a telegram in Monte Carlo when he wins his race: “Bravo. I love you. Anne.”

Yes, Jean Louis has won his race. But, it won’t be as easy to win Anne’s love. Excusing himself from a celebratory dinner,  he drives the 600 miles from Monte Carlo to Paris in his typical style, as fast as love can take him. She said she loves him. Should he stop to send a telegram? He doesn’t know what to say. Doubt overtakes him. But, the screen is lit in the color of hope.

Color. A recognition of love. Coming alive out of grief. There is a sense of hope. But, when Jean Louis arrives at Anne’s apartment, she’s gone and A Man And A Woman 1966 returns to black and white, to the grayness of a trepidatious mood. “I think she went to Deauville to see her daughter,” he’s told. Racing out to look for her, he’s now not running from his grief, but towards something new.

When he finds Anne on the beach, she has Francoise and Antoine with her. They embrace as Jean Louis lifts Anne into his arms and swings her around. The man and his dog are there, too; the dog running ecstatically on the beach. A picture of pure happiness.

But, as they make love, Anne stops. Pierre and their old lovemaking invade her mind. She’s not with Jean Louis anymore. Memories, loss, and fear get in the way. Old unfinished grief collides into now and risks tumbling everything down as Jean Louis asks: “Why?”

How Not To Turn Away From Life

“Because of my husband,” she answers, curled into herself on the bed. “But, he’s dead,” Jean Louis pleads. There’s silence. Anne lights a cigarette, miles away into her past life. “Then” refuses “now.” She tells Jean Louis she’ll take the train home. He dresses to leave.

His face is framed in new grief, Anne’s look is shock. They walk together to the train. And, Jean Louis asks: “For what reason did you say your husband is dead?” “He is, but not yet for me.” A familiar grief, a strangely soothing blanket; much less risky than opening up to a new love where, there too, there are no guarantees.

A Man And A Woman – juxtaposed in cinematic relief. The Man: stricken by another woman who’s left him: “Some Sundays start well and end badly. If I had to go through this again, what would I do? To see her for months on end as a pal? Do you just end up being pals? She wired ‘I love you.’ Admit it, boy, you just don’t understand women … It is crazy to refuse happiness.”

The Woman, on the train now, seems to sense that too. She sits – submerged in her sadness. Old and new. Remembering her dinner with Jean Louis. If Jean Louis gives Anne the time she needs, yes, it is a risk. But, isn’t taking a risk worth everything? If you don’t, you certainly do end with nothing.

Well, sometimes the more determined lover is just what it takes to help a scared one choose life. A lover that won’t so easily let love go. Jean Louis runs to meet Anne’s train. When she disembarks, she flies into his arms. He is there to bring her home.