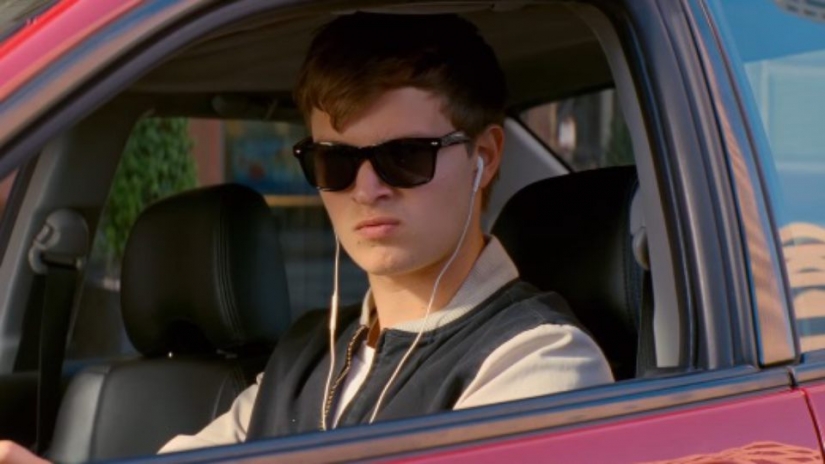 12 Oct BABY DRIVER
Want to Change? You’ve Got To Stop Running From the Past

Baby (Ansel Elgort) wants to change, but … stop running? That’s easier said than done. Especially if you’re a sweet, loving, sensitive kid (that’s Baby in Edgar Wright’s Baby Driver), whose cruel dad is responsible for your mom dying as you sit helplessly watching. What do you do with those terrifying memories? You grow up and you drive fast; blocking out the constant reminders that ring in your head with the sweet music (or any music) of that mom you lost. You drive; better than most people; better than your mom could, since she couldn’t avoid that one fatal accident. And neither could you, small and quiet, in the back seat. Now, you drive fast; skillfully fast; one step ahead of anything that can hurt you again. Or so you think.

Baby has a few problems. He stole a car, the wrong man’s Mercedes, and he’s in some very hot water with Doc (Kevin Spacey), the top guy in an armed robbery ring. Baby owes him – and now he’s trapped paying Doc back, being his getaway driver; a good kid mixed up with some pretty bad thugs.

Baby got an iPod one Christmas in the midst of his parent’s fighting and his dad’s (Lance Palmer) abuse. His mom (Sky Ferreira) was a singer. She made songs. Baby loves music and he makes songs too, out of names he’s called and things that hurt: “Retarded means slow; is he slow?” Slow is what Baby can’t afford to be. If he’s slow, if he stops, he’ll think; he’ll feel; he’ll hear the music of his pain. MOM. That’s the one tape he cherishes; the one word he can’t let go of; the most painful loss a child can sustain.

Baby doesn’t know it, but the violent situation he’s stuck in with Doc? He’s replaying an “old tape,” like a needle stuck in the middle of a song. You can’t run from the past, no matter how fast you drive. Baby tries, looking as if he doesn’t have a care in the world.

Hard as Nails or Scared as Shit?

“Hard as nails or scared as shit?” One of Doc’s thugs, Buddy, (Jon Hamm) wonders aloud about Baby’s shut down aloofness. That’s a good question. Baby looks as if nothing ever fazes him; driving fast, with his iPod music and ear buds always in his ears; in the midst of the violence he’s unconsciously invited into his life. He sort of succeeds in not letting anything touch him – never able to fully care about anyone – until he falls in love with a young kind waitress named Debora (Lily James). Until it becomes all too clear that Baby hasn’t escaped his past at all.

You can’t run forever from a trauma that has hold of you still; a trauma you keep repeating. And, now, when Baby wants to change, the violence he’s in the middle of again is threatening to destroy another chance at love.

Love is a Threat

It’s not just the violent thugs that threaten Baby and Debora. It’s that Baby wouldn’t be with these guys if he hadn’t been trying to be too tough to love someone again. But, Debora … she loves music and she lost her mom too, and she knows exactly what it means to want to drive away and never come back. “Head west, with a plan I can’t afford and my music, that’s all,” she says.

Debora knows Baby’s sadness. And, the song she’s singing when they meet? “Baby, oh baby … I love to call you baby. When you squeeze me tight, everything’s all right, I can’t stop loving you.” They both need someone they can never lose. They both know how impossible that is to count on.

So, Debora poses a threat. She even works in the diner Baby goes to every day because it’s a little piece of his mom. She used to waitress there before she died, and now Baby finds himself caught in a huge battle. Does he go towards change and love? Or does he keep driving fast without stopping? Does he keep running, head on, into the tough violent world that has already robbed him of too much – but holds out the “promise” that he won’t risk love again?

Baby has to drive fast, stealing red car after red car to make his getaways. Red is the color of seduction, violence, danger, anger, and blood. All of these, Baby knows. Red is also the color of STOP. But, as hard as Baby tries – he can’t stop.

Baby’s fast driving and music drown out loss and fear; all the things he has to be tough as nails not to feel. He can be with Doc, even with violent men. It’s what he was born into; it’s what he knows. Joseph, his deaf mute foster dad (C.J. Jones), tells him: “You don’t belong in that world” – but it’s the world of his past. He doesn’t feel safe in it, but he’s too scared to get out.

A song is playing: “I know it sounds funny, but I can’t stand the pain.” Of course, he can’t. What child can? With such a traumatic past, Debora’s kindness is scary. Music is comforting; and silence can be loud.

The fact that Joseph is deaf and mute shows us the way Baby has been deaf to his fears and mute about his feelings. He has silenced them with music. But, living in real silence is scary; that kind of silence is a noisy confrontation with all he’s been avoiding. Silence means stopping to face the broken tune of a dad that still lives inside, embodied in the form of Doc.

Doc is Doc, Doc is Baby’s dad, but he’s also a voice inside Baby’s mind that says: “Love Debora? You’ll lose her. You’d better stick with me.” After all, Doc is right there, watching, when Baby takes Debora to dinner. He’s not going to leave Baby alone. The posse of bad men, the gang of both his past and his terror won’t let him loose.

The film becomes a kaleidoscope of car chases, killings, and vicious confrontations with Buddy. It seems they will never stop. This is a strong metaphor (although a bit less relentless would have made the point) for the force of Baby’s struggle to break free from his past. Baby fights hard. But, Buddy shoots his iPod, and Baby falls into the frightening silence he’s been doing everything to avoid. There is no more music to drown out his sorrow.

So, Baby finally STOPS when the police barricade his car as he and Debora try to run. He takes the key out of the ignition and tells Debora she doesn’t belong in this life. He doesn’t either, but he has to face his past. The showdown with Buddy is a showdown with his losses. With hands up, he turns himself in, but it isn’t over for Baby. His kindness ultimately saves him.

We’ve seen Baby’s kindness. When he hijacks a car in the midst of a robbery for Doc, he hands the terrified mother her baby. When he kicks another woman out of her car, he politely hands over her purse. Waiting outside the Bank he scoped the day before the armed robbery now in progress, he warns the nice Bank Teller not to go into work. Too much has been stolen from Baby; he understands.

Baby’s known violence, but he’s also known kindness. His foster dad is kind and he’s kind to him in return. Baby makes sure Joseph is safe in a home before he goes to prison; regretting that he failed to take care of him as he’d promised to do. Baby’s mom was kind. Debora is kind. Doc turns out to have a kind streak too – and a soft spot for Baby, although he tells Baby to keep driving without taking his foot off the pedal for 25 years. Finally, when Baby has to stop, his kindness and remorse help him in court.

Facing the Music of Change

The recipients of his kindnesses testify: “He threw my purse; he said he was sorry.” Joseph tells the jury: “He made a mistake when he was younger [at least he thought it was his fault] and it’s haunted him ever since. It was never his fault. He has a good heart; always has.” The judge goes easy on Baby.

Baby has faced how hard it is to break free of a violent/scary dad that still lives inside; and how hard to handle the guilt that he, a little kid, couldn’t be strong enough to save his mom. Plus, how could he manage all that sadness?

Baby’s shown Debora every side of him. He finds out he can count on her; she writes him every day: “I can’t wait until it’s just us and the music and the road.” Debora is at the gate, waiting for Baby, when he walks out of prison five years later. He’s not too afraid to accept her love.