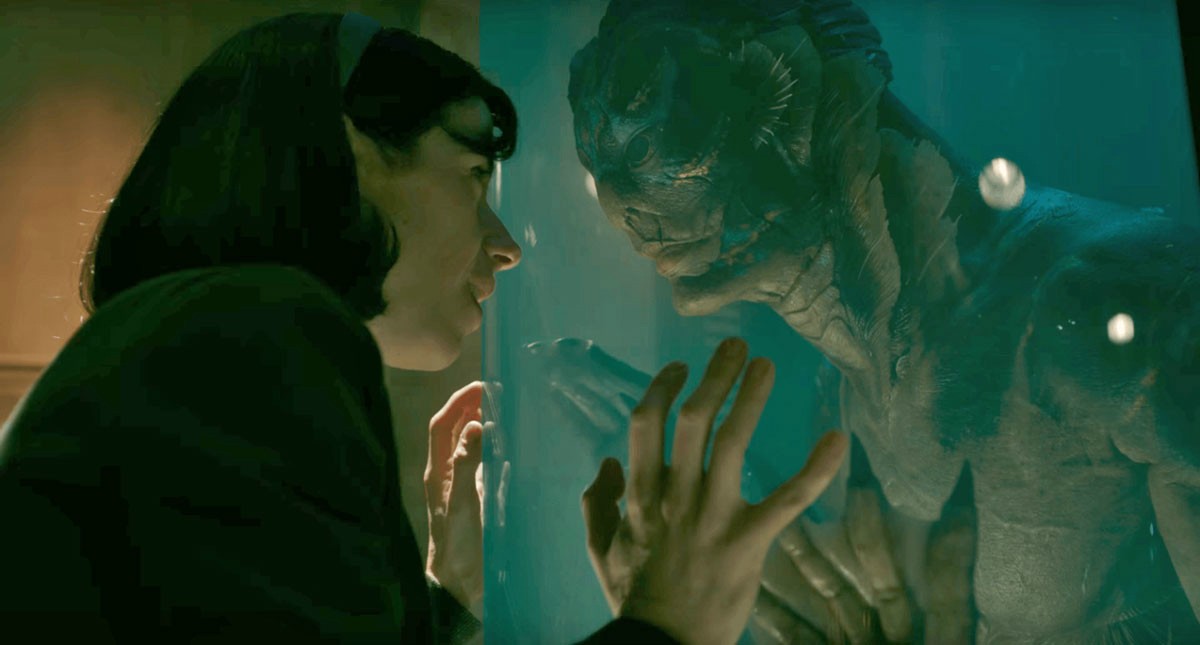 04 Jan THE SHAPE OF WATER
A Psychoanalyst’s Thoughts On:
A Girl’s Muteness, A Creature’s Aggression, & Seemingly Magic Cures

Cruelty and misunderstanding can make you a monster or a mute. Guillermo del Toro’s compelling allegorical fable, The Shape of Water, shows us that quite well. We can say all the obvious things about this multi-layered film set in its backdrop of the Cold War and a high-security government laboratory in 1962 Baltimore. There’s loneliness and loss; competition between the United States and Russia to have the first man in Space; fear, paranoia, dehumanization and exploitation of people and creatures. There’s the overriding do whatever it takes kind of brutality to be the one on top. Yet, there’s also that human touch, the other story at the heart of the film: how cruelty is survived. That story, about a mute girl and a water creature, may seem fantastical; but it’s not.

A Girl’s Muteness/A Symptom/& A Clue

Elisa (Sally Hawkins), the young janitress who falls in love with our amphibious otherworldly creature (Doug Jones) in the government laboratory, is mute. She doesn’t speak, but she isn’t deaf. In fact, Elisa hears everything. So, is it that she can’t talk? Or, did something happen early in her life to make her decide it’s better not to say anything out loud?

Understanding seemingly unexplainable symptoms is what I do. So, these questions got me thinking. And, there it was – hidden in the story of this Princess, as her friend/our narrator Giles (Richard Jenkins) calls her – the kind of clue a psychoanalyst keeps her eyes open for.

That clue may not be obvious to the naked “untrained” eye. Anyway, there’s certainly a lot more going on in The Shape Of Water to focus attention on. But, my answer was there – in Richard Strickland’s (Michael Shannon) cruel reaction to the beautiful (and also mute) creature.

That frightened creature, trapped in a water tank in the laboratory where Elisa cleans, has been brought there from South America to be experimented on and dissected; dehumanized to merely a “thing.” As Strickland says: “crack the thing open and learn what you can.” Learning doesn’t have to be cruel. But in this situation it is.

To teach him a “lesson,” Strickland tortures the beautiful creature with an electrified cattle prod. The creature makes a crying/screeching sound – and Strickland beats him, yelling: “Is that you crying? That’s just the worst fucking noise I’ve ever heard.” In this one particular incident of Strickland’s overall heartlessness was my clue to the very likely cause of Elisa’s own condition.

Those scars on the side of Elisa’s neck – those deep red welt/scratches – they’ve been there since she was a baby. I think Elisa had a cruel dad; nasty as Strickland, who abused her when she cried, like any baby cries. If your dad hates you for crying – would you ever want to make another sound?

“Time is but a river flowing from our past …” this is the quote on Elisa’s daily calendar as the film begins, and so it is for Elisa. She’s felt lonely her whole life, as lonely as this creature who’s seen as a monster. The scars of the past have etched themselves deeply inside her silenced voice. They live there.

Yet, it’s not only fear we see in Elisa’s (refusal?) to speak. We also see the undercurrents of power; she will not speak; that she has control of. People might think she’s a monster in her differentness. She might think that of herself. But, no, the real monster is Strickland – because Strickland would even destroy love if he has the chance.

But Elisa Esposito? She can sign, “fuck you” to Strickland and make it look like “thank you.” In that, she has the last word. And, when she saves the water creature from Strickland’s cruelty, she scores another victory against him – and against her own loveless past.

A Creature’s Aggression/ Fear/ & A Defense

When The Shape Of Water introduces us to our alien but strangely familiar amphibious creature, he’s trapped in a water tank. His skin has scales; and shimmers the color blue. He may roar on the attack if anyone gets near him (he has to). But he’s really more human than those who keep him captive – with his beautiful, kind, knowing face. The scientists think he was worshipped as a God where they found him. Now, he’s as powerless as anyone can be.

In the U.S. military laboratory where he’s imprisoned, they call him “the asset.” He belongs to them now. He’ll be used for their purposes and discarded as they wish. He’s scared; he’s trapped; he’s almost broken, and he can’t get out. All he has to protect him is a ferocious aggression.

Really, though, he’s a gentle soul. He’s forced to be the monster they think he is. He lashes out against those who scare and mistreat him. Aggression is his only defense. He’ll scare them so they don’t get near him. He’ll make them afraid of him. His aggression is just as much his retaliatory/protective voice as Elisa’s mute/secret sign language is hers.

So, is he a God? Well, that’s a complicated question. In the land of myth and allegory del Toro creates – yes. The touch of his grateful hands grows back hair on Giles bare/bald head; he heals wounds; he can bring people back to life. He doesn’t die. But, if he is truly immortal, immortality doesn’t save him from cruelty and fear. Elisa’s eggs and music are the start.

When Elisa first comes face to face with the creature in the laboratory, she taps his water tank. Of course, he has no reason to trust her either and growls aggressively. She moves away. Yet, she knows him as she knows her own fear. She feels for him; and she goes back many times, with food; with eggs, sitting on the edge of the tank. She tempts him with new food, eating sensually, and with the music of a lonely longing for connection both know too well.

Elisa and the sea creature may seem an unlikely pair, but soon we see they aren’t. They’re well matched in their suffering; and in the ways they reach in and understand each other – without words.

She teaches him “eggs” and “music,” signing, while she dances to the music she plays when she visits. She introduces him to the language of softness. She comes first with one egg, then with many, all lined up on the edge of his tank. Hard-boiled eggs – as each has had to form a tough outer shell. But these shared eggs? They offer an opening; they offer both the “monster” and the mute something new.

Eggs and water – that’s how we all begin. Elisa’s was a sad beginning – she was discarded, it seems, somewhere near the water. And, now, in this magical but real film, our water creature spirits Elisa away to a different kind of life; to the womb-like space she creates in the bathroom after she brings the creature home. That water: a sort of amniotic fluid for the two of them to be re-born into a life of love, not cruelty and misunderstanding.

Elisa does have a few friends – Zelda (Octavia Spencer) a fellow cleaning lady; and the kind (also very alone) gay painter, Giles that she lives with and looks after. But, I think, in many ways she’s kept herself as removed and self-protected as the creature. After all, loving and needing someone can hurt. So, Elisa has her dreams instead: of red high heels and of something soft to lean her head on; like her hat against the window as she travels towards the creature on a subway train. She’s lonely; and lonely is something she knows.

She knows it in the creature. She says it in sign to Giles who knows lonely too: “He’s all alone; the loneliest thing I’ve ever seen. I have to get him out. What am I? I’m more monster like him; I make no sound like him; all I am brought me here to him … I can either save him or let him die.”

The creature has no one in this strange land; he’s being used; he’s scared; he’s seen as a monster. Elisa knows how that is, deep in her heart. She hatches a plan, with Giles’ help, to save him and (without realizing it) herself.

Magic? Or, Simply, The Shape of Love

The Shape Of Water tells its murderous tale of violence and sabotage. Yet, more importantly, del Toro’s film weaves its other story: a story of love between a misunderstood creature and a mute girl. And, in the end, Elisa finds the voice she lost long ago, as she sings her love out loud to him.

Singing and speaking love: that’s the language of healing, of reaching where there are no words – into the fear, into those isolated places where people can hide. When he takes her away from this world, it might seem that Elisa enters a fairytale. But, maybe, just maybe, it’s not. Maybe it’s simply, the shape of love, when love is returned.

In del Toro’s The Shape Of Water and in the creature’s love reflected back at Elisa through his gentle grateful eyes, Elisa is healed. He gives her the shape of whole. This isn’t magic at all. It’s the power of being seen: “… the way he looks at me; he doesn’t know what I lack; that I’m incomplete; he’s happy to see me every day. He sees me for what I am.”

Couldn’t we all use more of that shape of love in this troubled world today?