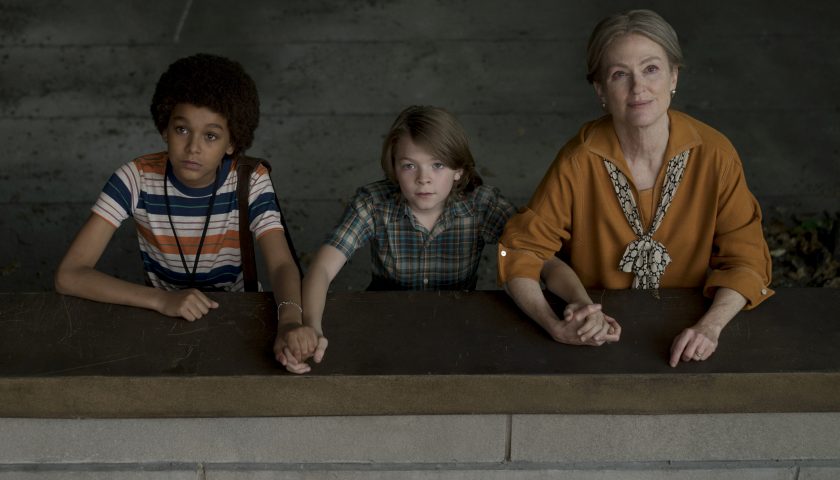 Loneliness is a silent world. That world is the world Ben (Oakes Fegley), Rose (Millicent Simmonds), and Jamie (Jaden Michael) inhabit in Todd Haynes’ gorgeously filmed and sensitively rendered half-period piece, half-silent and all-around beautifully woven film Wonderstruck. Haynes draws on the visual; on images that speak louder than words, to tell the story of these children – Rose from an era 50 years before the 1977 story of Ben and Jamie. All three are searching for answers, for belonging, for someone to hear them, in a strangely confusing world of loss. What Ben, Rose, and Jamie find is more than they are looking for …

Having no mother is a hard life to navigate alone, until someone sees the loneliness and kindly, gently, reaches in. How that happens for Ben, Rose, and Jamie is a story worth telling. Todd Haynes does just that by lovingly reaching into the subjects of loss, loneliness, and human connection through Brian Selznick’s screen adaptation of his young adult graphic novel Wonderstruck.

The film begins with two interwoven stories – Ben (1977) in Gunflint, Michigan and Rose (1927) in Hoboken, New Jersey. Both children have newspaper clippings of lost and longed for mothers. Then there’s Jamie. He comes into the film when Ben arrives in New York City, and he is the connecting force that brings the other two stories together. His story is a lonely one too.

Ben and Rose’s clippings tell us where their stories start:

Ben’s clipping says: “Local librarian dies in auto accident.” That’s his mom (Michelle Williams). He lives with his aunt, uncle, and two cousins now, but no one seems to understand the depth of his loss. Ben is looking for clues to a father he never knew.

Rose, in a bookstore, steals a page from a magazine: “Our Brightest Stars.” The page is an ad for a silent film, starring Lillian Mayhew (Julianne Moore) in “Daughter of the Storm.” This is her mother. Rose is a deaf girl, in a world of silence worse than living in a non-hearing world; it’s a world with no mother’s smile; no mother’s soothing touch.

Jamie is a boy with divorced parents, looking for a friend. His mother works long hours and he’s left too much on his own. His father doesn’t have a room for him in the place where he now lives.

After Rose is angrily chased out of the bookstore where she rips out the clue to her mother’s whereabouts, she writes a note: “Help me,” and sets it afloat on a deserted river.

Is there anyone to hear?

Lonely kids invent secret rooms and secret lives to replace what is missing. These secret lives are meager substitutes for human connection. But, what else do lonely kids have but fantasies of something better, of a longed for life far from the realities they live?

Ben collects things he wants to keep. His mother teasingly told him his room is a museum. Ben too is looking for clues – about the father he needs to find. He’s a curator, he decides, when, searching among his mother’s things after the accident; he finds a book. Wonderstruck tells the story of the first museum: The Cabinet of Wonders – and it is in that book he finds the clue he’s looking for.

Jamie makes a room to play in, alone, hidden away in a corner of the American Museum of Natural History where his father works. In this room are things stored away from view. Each object has a special place in Jamie’s fantasy world; filling the empty space of his absent mom and dad.

Fifty years earlier, Rose builds cities of paper buildings with pages from books and pieces of her father’s newspaper. She’s a curator too. She constructs elaborate models, dioramas, and panoramas, from connections she tries to make; things she wants to remember; people she loves. Rose makes a world she longs to inhabit – a better world than one with a mother who’s abandoned her and a father trying to send her away.

Searching/ For What Is Missing

Ben tries to make sense of his mother’s death and a father he never knew. Hidden in Wonderstruck, he finds his clue: a bookmark from Kincaid Books in NYC, with a note to his mom: “Dear Elaine, I’ll wait for you. Danny.” Danny must be his dad and Ben is determined to find him. Yet, there’s a storm outside (not so different from the storm of feelings brewing inside him.) Lightening strikes; makes Ben completely deaf; and sends him to the hospital. He won’t let his loss of hearing stop him, though. He knows what he wants.

In parallel stories, 50 years apart, Rose cuts her hair into a bob (to hide herself), and leaves on a ferry to NYC before her father can send her to a home for the deaf. Ben sneaks out of the hospital, and is soon aboard a Trailways Bus on his way to NYC’s Port Authority.

Rose runs away to find the mother she misses. Ben is on a search for Kincaid Books and his dad. They are small kids in a big city; alone; self-sufficient; determined; strong and brave. Rose a bit more scared because of the unkind angry faces she repeatedly runs into, reminiscent of both parents. And, sadly, it’s that angry mother she finds; too busy at her theater; not at all happy Rose has appeared, a mother who doesn’t want her.

But, Rose also finds kindness in her older brother, Walt, with a job in the same American Museum of Natural History where Jamie’s dad works 50 years later. As Rose enters the museum looking for Walt, the book, Wonderstruck, is on exhibit: “Cabinets of Wonder: How Museums Began.”

Ben carries his copy of Wonderstruck when he meets Jamie and makes a friend. The book, with Jamie’s eventual guidance, helps Ben find Kincaid Bookstore and answers about the father he is trying to find.

Museums /Connections To The Past

Museums are places where memories are stored; where connections are made to history; where what is forgotten can be found. The mind is a museum too, a collector of conscious and unconscious memories. We are all curators of history. We all search for something.

We see the young Rose in NYC at the Museum, looking at a large meteor. She writes: “Where do I belong?” and tucks the note into an empty space on the exhibit. She reads: “All Meteors begin as shooting stars burning across the night sky.”

There is darkness and there is light. There are bright flashes of memory – in dreams, in nightmares like Ben’s recurring nightmare of wolves. Fifty years apart, Ben explores the same museum for historical connections; for his roots; for the father he didn’t know. He, like Rose, searches for where he belongs.

It is in that same museum Ben meets Jamie, in front of an exhibit of the exact wolves in his recurring nightmare, with a plaque: Gunflint Michigan. His home; he tells Jamie; that is where he is from. As Jamie realizes Ben is deaf and teaches him a little sign language, he points out a woman walking by; and tells Ben she comes to the museum everyday.

Later, we discover that woman is a grown-up Rose (Julianne Moore), Rose Kincaid of Kincaid Books, and a connection to his dad. Coming out of those secret rooms of loneliness means making connections; human connections; connections of kindness and understanding to bridge all that has been lost.

Yes, there are people to hear and new places to belong.

I won’t reveal the specific interconnections Haynes slowly shows us as Wonderstruck winds to its close. The joy is in the discovery. Suffice it to say that Rose helps unlock the mysteries of Bens’ father. And we watch as Rose, Ben, and Jamie come out of their lonely worlds.

Ben’s mom once said: “We are all in the gutter, but some of us are looking at the stars.” Wonderstruck ends as Ben, Rose, and Jamie sit on the rooftop of Queen’s Museum, looking out on NYC during the 1977 blackout. But, for the three of them, there isn’t darkness anymore. Ben signs to Rose, introducing Jamie: “My friend.” Rose holds Ben’s hand.

Stars are shining in the sky. Not the kind of “star” that Rose longed for as a child; a mother whose life did not include her. Instead, Ben, Rose, and Jamie find the glittering and comforting light of love, friendship, and each other.