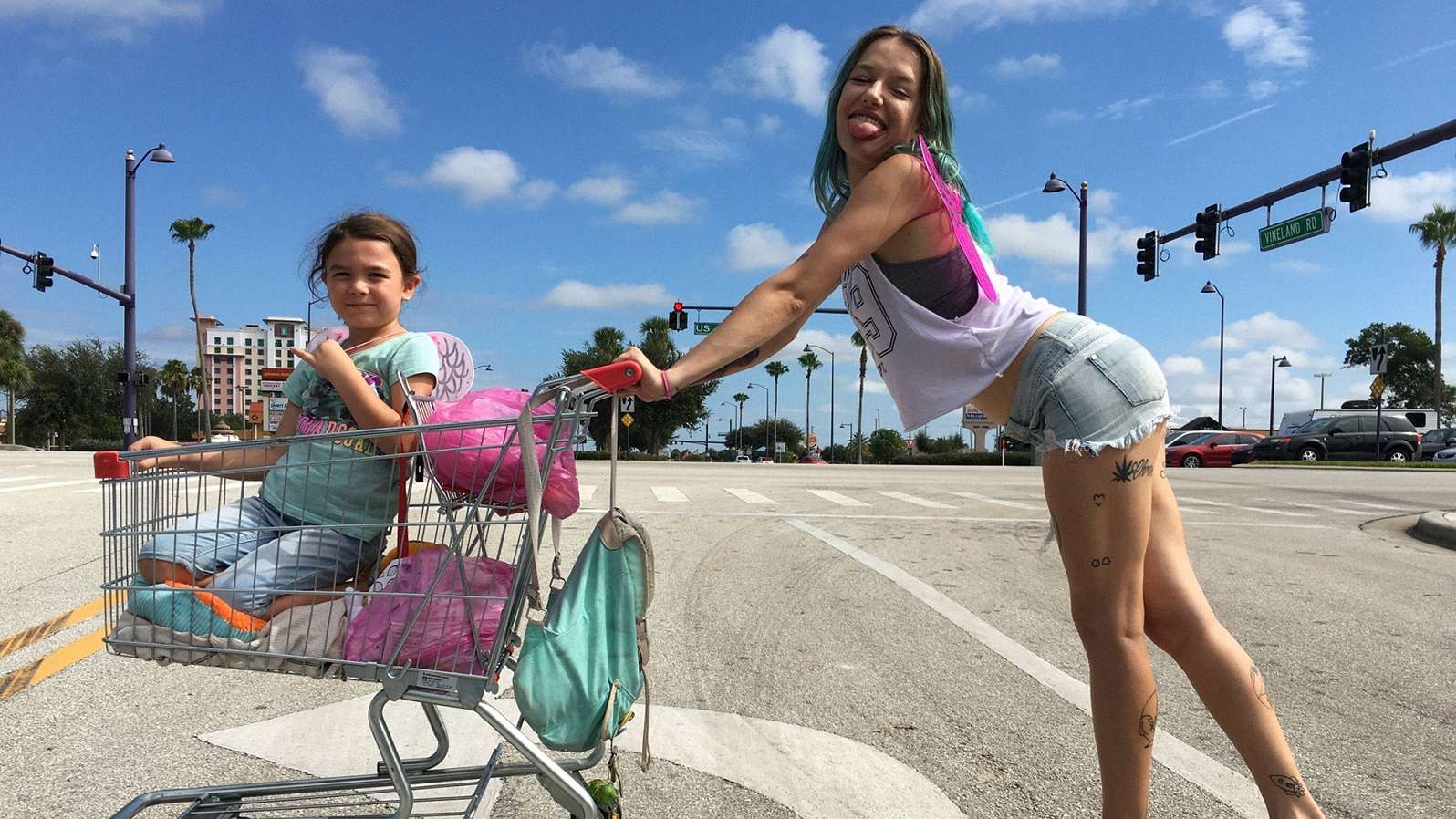 09 Nov FLORIDA PROJECT
How A (Seemingly) Happy Life Can Shatter

Life doesn’t shatter in an instant, but it can seem like it when you live in a delusionally “happy,”  thumbing your nose at all kinds of rules, sort of “fun.” This is the stuff of mania and mania teeters on a very delicate balance; it can easily come crashing down. Plus manic defiance is no real way to have an identity or live a life – and it’s certainly no way to be a mom. There’s a delightful freedom of self-expression in Sean Baker’s Florida Project and in the freewheeling and loving relationship between six-year-old Moonee (Brooklynn Prince) and her mom, Halley (Bria Vinaite). But, trying to create the image of “happy” when you really aren’t is fragile and can shatter as easily as glass.

The Backdrop Of Disney World

Halley’s mania is false happiness (an attempt to shut out any other feeling). Florida Project’s backdrop of Disney World’s Magic Kingdom Park, with its centerpiece icon of Fantasyland’s Cinderella Castle, says it all: the happiest place in the world. Halley can’t be sad.

Plus, depending on anyone must have gone very wrong in her not-long-ago past, seeing how she lives as if to say: “Who needs you, your rules; or your love? I’m just fine the way I am.” We see this clearly in her reactions to Bobby (Willem Dafoe), her kind motel-manager constantly trying to run interference and to be the voice of reality (to no avail): “You’re not my father. I don’t have to listen to you.” That’s Halley. Sadly, her manic defiance undoes her in the end.

Halley’s endearingly likable. She’s a character. She’s fun, she’s charming; but she pushes limits and people’s buttons; she lives both on the edge and over the edge, violating rules and laws. She steals; she sells perfume at a resort where peddling is illegal and off limits. She prostitutes herself for money; making Moonie hide in the bathroom while she has sex with a man in their one-room motel accommodations for transients, fittingly named (for the fantasy world Halley lives in): The Magic Castle.

Sean Baker shows us the plight of this under-recognized part of humanity. He also shows us the dangers of mania. Not all residents of The Magic Castle live the way Halley does, using law-breaking and rule-defying wiles to get by; stealing four park hopper tickets out of the pocket of her “john” and selling them at a huge discount outside a Disney World ticket booth for the “greatest deal, only $400.”

Yes, $400 is a lot of money for Halley and Moonie – money Halley uses just as unwisely as stealing. She’s the kind of mom who’s little more than a kid herself, and a rebellious one at that. She doesn’t think of Moonie at all; really, she can’t. And, with the stolen $400, she takes Moonie on a shopping spree buying everything in sight – things to play with, things worth nothing, things that aren’t what Moonie needs. Sure, it’s fun racing around the market with money to blow; but it’s the kind of fun and lifestyle that no one can keep up. And, it doesn’t keep Moonie safe.

Yet, Halley is also loving and kind; she’s complicated. We see her kindness towards Moonie; and also towards Jancey (Valeria Cotto), Moonie’s newest friend from the motel next door. She takes them hitchhiking on a special birthday celebration for Jancey. They sit outside at night, on the edge of Disney World, with cupcake and candle and a blow-it-out wish, to watch the summer fireworks lighting up the sky in an unforgettable birthday glow.

This celebratory spirit lives, though, in the shadow of Halley’s mania, and this kind of glow can’t last. Soon, she has a face-off with her closest friend, another mom, living in the same low-income motel – Ashley (Mela Murder), Moonie’s best friend Scooty’s (Christopher Rivera) mom. One of her shut out feelings comes out: a terrible rage at being hurt, rejected, and crossed.

Ashley – A Different Sort Of Mom

Ashley is a different sort of mom. She has some rules for Scooty. So, when Moonie (the ring leader), Scooty, and Jancey literally play with fire and unintentionally burn down the eyesore of abandoned condos down the road – that’s it for Ashley.

No one knows the kids are responsible, but Ashley gets it out of Scooty and tells him that DCS could come and they’d be in big trouble. Halley, on the other hand, finds the fire exciting, rushing to watch the buildings burn down: “This is better than TV!” Excitement is the name of mania’s game; and it sort of works, temporarily at least, to evade disturbing or scared or sad feelings.

Ashley, though, capable of fear and reality, ends the friendships. She can’t trust Halley as a mom. You see,  Ashley actually tries. Life is hard but, (quite different than Halley), she holds a real job at a restaurant down the road. And, the caring, gentle, and maternal soul she is, she’s been sending waffles home with Moonie and Scooty from the side door of the restaurant. Halley has benefitted from her friendship and caring too.

The rejection sends Halley over the edge. She can’t stand it, and marches Moonie into Ashley’s restaurant. In a bold challenge, she instructs Moonie to “order whatever you want. We’re staying here all day.” When they’re finished, she looks at Ashley with barely veiled hatred: “You going to pack this up for me or do I have to tell management how I feel about the service?”

As they walk away from the restaurant, Halley throws the food on the ground and kicks it away (as if she’s kicking away Ashley as Ashley did to her). She’ll have the last word. It turns out the last word isn’t Halley’s.

Dangers of Refusing to Color Inside the Lines

Halley’s escalating and desperate behavior gets her into trouble. When the man she stole the tickets from comes looking for her at the motel, she lies, hides behind Bobby, sticks out her tongue, and flips him off. When Ashley tells Halley that Scootie “better never have been in the room when you were doing your whore –ing,” Halley, in a now uncontrolled rage, beats Ashley up.

DCS is called. Child endangerment is a serious matter. There are dangers, also, in Halley’s complete refusal to color inside any kind of social line – even if this might be out of understandable distrust, anger, or need to get free of oppressive control. There are limits to what works; there are limits to what is good for you and what is good for your child. In the end Halley loses the battle. Sadly, it’s Moonie that suffers the most when her mom’s fragile mania shatters.

Moonie, free-spirited and adorable and loving as she is, is her mom’s daughter. She’s learned a lot of provocative, in your face, and inappropriate behaviors by mimicking her well-meaning but defiant mom. And, worse, like her mom, she has no idea what to do with her feelings – especially sad ones.

So, when the DCS women come knocking for a visit, Moonie’s the one left with all the sadness, and all the fear. Being suddenly taken away is terrifying. It’s also terrifying to be lied to by your mom; thinking you’re safe. And, it’s terrifying to be tricked by a strange lady who tells you “you’re going to live with another family for a just little while.”

It’s too much for a little girl with no mom to help her with her feelings (a repeat, I’m sure, of Halley’s own past). Now, we see Moonie, that happy kid, crying her eyes out as she says goodbye to her best friend, Jancey. Not knowing what else to do and trying to help, Jansey grabs Moonie’s hand and they RUN fast – right into Disney World: The Happiest Place on Earth. What else can Moonie do? Living in fantasy is what her mom taught her and now that unreal “happiness” is crashing down.

Sean Baker shot Florida Project’s last scene on his iPhone in the pop verite style he developed in Tangerine; consistent with his cinematic goal of staying within the borders of reality and truth. This is the hardest thing for Halley to do. Let’s hope, in the world of Florida Project, that Halley might learn to face the reality of her feelings for herself and for Moonie. But, if not, let’s hope someone helps Moonie to live with her own – because, truly, being able to live with the reality of all your feelings is the only way for the cycle of mania to end.