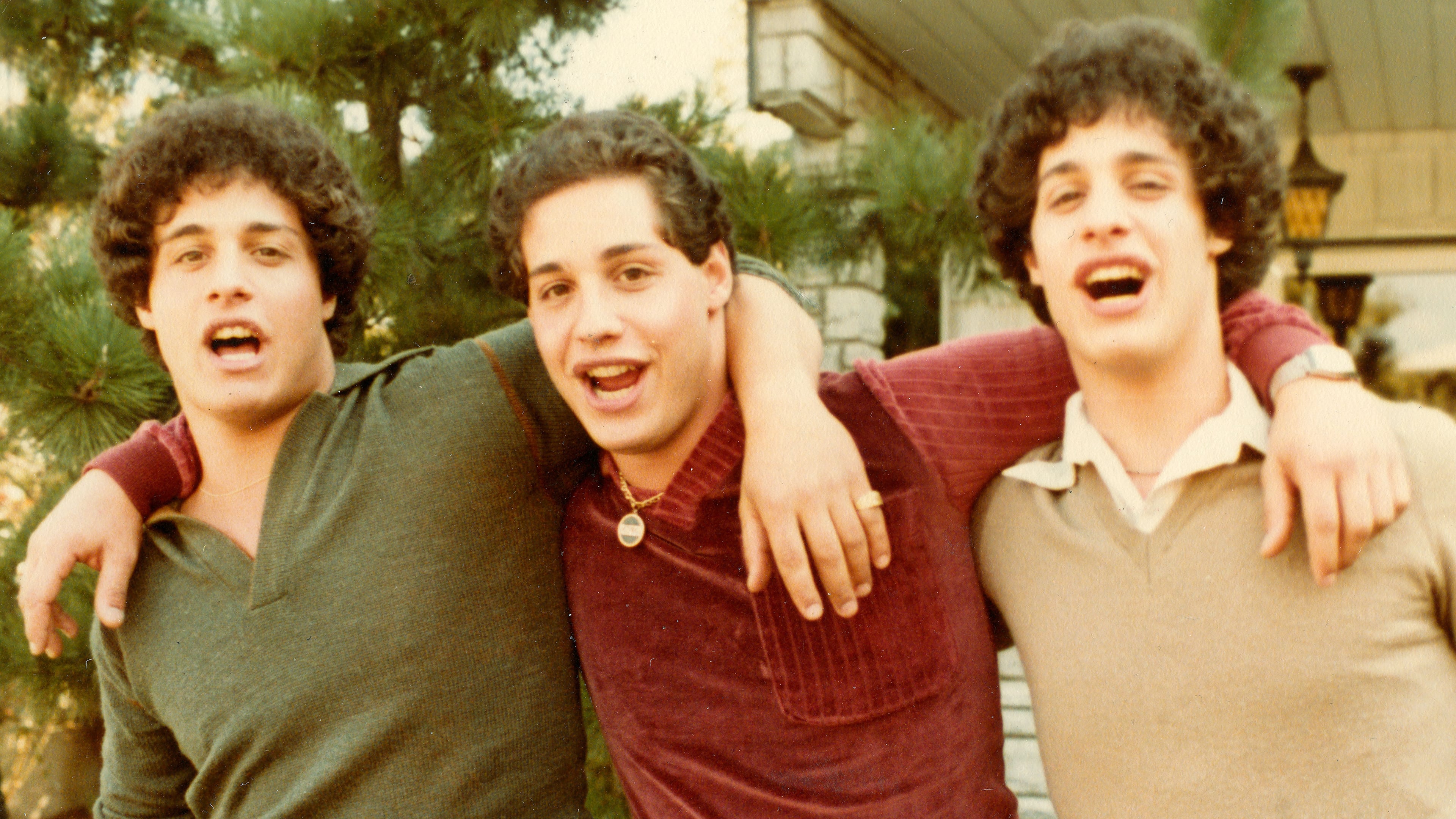 26 Jul THREE IDENTICAL STRANGERS
What Are The Signs of Separation Trauma?
This Film Tells Us A Lot

Tim Wardle’s documentary, Three Identical Strangers, is a timely and disturbing account of the trauma of early separation. As a psychoanalyst who specializes in separation trauma, I left the theater shaken and troubled. Children aren’t for using. They aren’t for self-serving studies, proving points or punishing parents (yes, Trump and your cronies, that’s you.) The scars are severe and they last a lifetime. We see those scars in Bobby, David, and especially Eddy. The triplet’s separation was deliberate. It didn’t have to happen.

It happened 6 months after the triplets were born on July 12, 1961 to an unwed Jewish high school girl who placed her babies for adoption with the Louise Wise Agency in New York City.

Those babies were ripped apart.

It happened because Peter Neubauer, M.D., New York City child psychoanalyst, wanted to study identical babies, placed in different family environments, so that he could answer questions about nature versus nurture.

It happened because Viola Bernard, M.D., another psychoanalyst and Louise Wise’s psychiatric consultant, helped him.

Arnold Richards, M.D., New York psychoanalyst and founder of www.internationalpsychoanalysis.net (who knew both Neubauer and Bernard) put it this way in a private communication with me:

“Viola Bernard was the real culprit. She convinced Louise Wise and Neubauer that twins and triplets were better off adopted and raised separately.”

Better off separate? That couldn’t be farther from the truth. Worse, the Louise Wise Agency lied.

They never told the three adoptive families their babies had siblings. And the parents were told that the visits to their children for Neubauer’s study (which lasted for years) were part of a normal study following adoptive children.

How did the Louise Wise Agency justify this secrecy?

Lawrence Wright, author and researcher of Twins: and What They Tell Us About Who We Are (1997) as well as the recent, Going Clear: Scientology, Hollywood, and the Prison of Belief (2013), spoke to an heir of Louise Wise.

Here’s what she told him: “Adoptive parents should be told as much as is reasonable.” That statement is simply: chilling. “Reasonable,” by any stretch of the imagination, had nothing to do with the welfare of these children.

The “needs” of the Louise Wise Agency and of Neubauer trumped the needs of babies – a dangerously narcissistic phenomenon that is never good for children under any circumstances.

When Lawrence Wright told Bobby exactly what happened, Bobby was outraged: “This is some kind of Nazi shit. They used us like lab rats.”

These were vulnerable babies. Babies who had already suffered one abrupt separation from their birthmother and were, then, left motherless for six months. These babies needed each other even more.

Finding Each Other at 19

The film opens. It’s 1980 and 19-year-old Bobby Shafran is on his way to Sullivan County Community College in the Catskills from his home in Scarsdale, New York.

He’s a freshman, he’s never been there before, but suddenly kids are coming out of the woodwork and greeting him like a long lost friend. A not outgoing teenager, he’s surprised by such a warm welcome.

Then they begin to call him Eddy. Is it a case of mistaken identity? Yes, but No.

Turns out, Bobby Shafran is an identical twin with a brother named Eddy Galland, also born July 12, 1961, and also adopted. But, wait. That’s not the whole story: another brother surfaces. Bobby is an identical triplet. The third is David Kellman.

It all seemed happy enough at first. David’s aunt, Hedy Paige, describes the boys as “puppies” rolling all over the floor together: “They knew each other. They belonged to each other.”

The physicality of their reunion is not accidental. The triplets were immediately taken back to their original state of physical closeness. Emotional bonds begin to form in utero. Twins and triplets know the nearness of each other’s bodies from conception, sensing each other’s presence, never knowing a world apart.

The film returns to the beginning of the triplet’s lives at the well-known and well-regarded Louise Wise Adoption Services in NYC. It is then that we discover they were together for the first 6 months of their lives: “3 bodies lying together. And then the coldness of deprivation.”

It is no wonder the three banged their heads as babies: “It was definitely separation anxiety,” David says. The pain of their separation was unbearable. Trust was damaged.

Wardle knew he wanted to do a documentary about the triplet’s experience, but it wasn’t an easy beginning. Winning Bobby and David’s trust took time (Eddy was tragically dead). Wardle had to prove he wasn’t another person using them.

Tim Wardle learned about Bobby, David, and Eddy’s story from his colleague Grace Hughes-Hallett, a producer on Three Identical Strangers. Hughes-Hallett turned to Lawrence Wright’s book, Twins: and What They Tell Us About Who We Are, for research while developing her own documentary about adoption, The Dark Matter of Love. She found cursory details about the triplet’s estrangement.

According to a Huffington Post article by Matthew Jacobs posted on 6/26/18, this is what Wright’s book exposed:

“They were part of an experimental, unpublished study run by Peter Neubauer, a Freudian psychoanalyst who became a leading figure of child research in the 1950s and ’60s, right as psychology was proliferating in American academia. At the time, work that would today be deemed ethically dubious wasn’t uncommon; think of the Milgram obedience experiments or the Stanford prison experiment.”

All three studies put human subjects to use and practiced deception. But, there are big differences:

The Milgram obedience study (1967, which lasted only 1 hour for each subject) and the Stanford prison experiment (1971, which lasted only 6 days) were conducted on adults. These two studies did not drastically alter the course of lives or development.

Neubauer’s study took innocent babies, chose their parents for research purposes, and separated siblings intentionally. These babies were emotionally impacted and traumatized for their entire lives.

In Three Identical Strangers, we see depression. We see hopelessness; we see insecurities and shaky self-esteem; we see anxieties about whether or not anyone can be counted on to stick around. These signs of trauma are most obvious in Eddy.

Eddy, warm and full of life in the archival footage in the film, did not survive his losses.

“Eddy didn’t feel he fit in with his family. He always felt he wasn’t in the right place. Some people are just not a good fit,” David tells us in the film.

David and Bobby’s families helped them to overcome some of what they endured in their first six months. But, Eddy couldn’t connect with his dad and his separation anxiety was the most extreme.

If we look closely, though, we can also see how much Eddy needed love; how deprived he was of it; how great and heartbreaking were his hunger and his longing. There was desperation in him. Once he found his brothers, he needed to know they were right there.

As much as there was happiness in their re-connection, there also conflict. For Eddy, with any sign of differences or separateness, their attachment wasn’t secure; just like all the earlier attachments in his life. He was depressed, understandably so. Early abandonment caused depression in all three.

Eddy was later diagnosed as manic-depressive. Perhaps he had a genetic predisposition. We’ll never really know. He often appeared excited and happy. Sometimes he was. Other times he was using his manic “happiness” to cover up the pain he was always in; to override his sadness; to make everything appear fine.

If mania had a voice, it would say: “I can do it myself. I don’t need anything. In fact, I don’t need anyone at all.” It’s a defense against the fear of abandonment and the depression that comes from that fear. Yet, it wasn’t true at all. And, Eddy needed a lot.

In fact, he couldn’t really tolerate being separate or without his brothers. He moved more than once to be physically close to one of them. When he killed himself, he lived right across the street from David.

His suicide happened after the brothers had conflict with each other over their restaurant business, Triplets in Soho. Bobby felt pushed out. He left the partnership. Eddy and David felt betrayed.

Good parents help. As David said in the film: “I’m here because of the foundation given me by my parents.” Hedy Paige, David’s aunt, said it beautifully: “I think nurture can overcome nearly everything.”

Love and understanding are certainly essential ingredients in overcoming early trauma. They can prevail. But, that isn’t the whole story. When early trauma exists, the fears of betrayal and abandonment enter into all relationships. That distrust is hard to conquer.

The saddest thing I read in an online discussion of the film was something Bobby said to Tim Wardle. Wardle offered Bobby and David visits to a psychologist to sort through any feelings about the making of Three Identical Strangers. Bobby refused, saying: “What could they possibly do for me?”

I understand. With his early history, he couldn’t possibly feel differently. All psychologists and psychoanalysts are as suspect as Neubauer and Bernard. It’s not true though. Any sensitive professional would take that distrust seriously.

Three Identical Strangers is an empathic portrayal of the effects of separation trauma. But the story doesn’t finish on an encouraging note. Yes, Neubauer’s records, archived at Yale and closed by him until 2065, were opened up as a result of the film. But, they were so heavily redacted that Bobby got no answers. And, Eddy’s dead.

I left the theater sad, shaken, and troubled. I was already angered at the Trump administration’s cruelty towards children at our borders (and parents needing our help). I found it hard to stomach that same cruelty at the hands of fellow psychoanalysts; certainly equipped to know better.

It shouldn’t have happened.

Yet, I also know something Bobby doesn’t know. There are answers to be found for separation trauma in the very individual ways the past lives inside us and takes its toll. There are kind helpers.