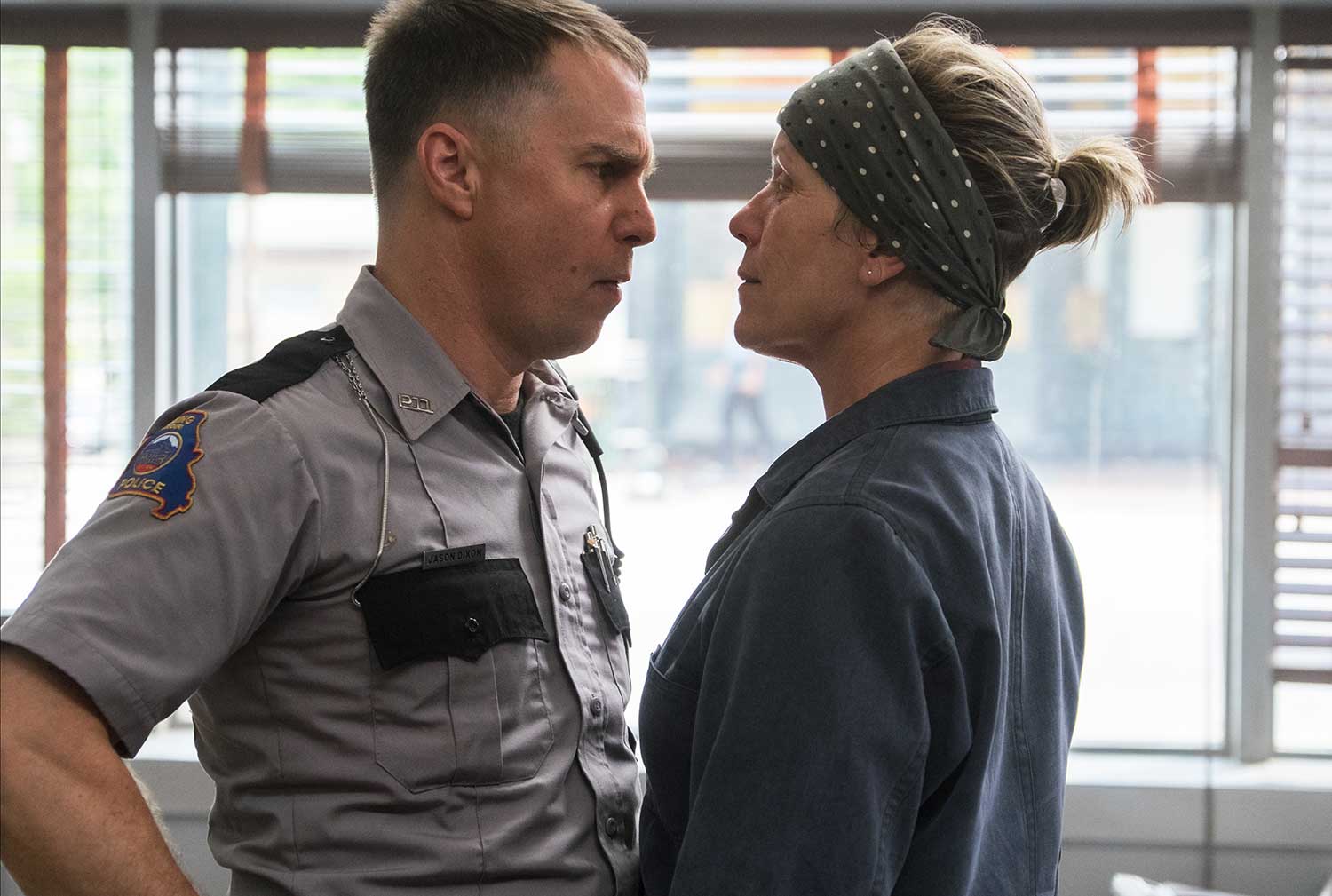 07 Dec THREE BILLBOARDS OUTSIDE EBBING, MISSOURI
Anger and Blame: How Does The Buck Finally Stop?

Martin McDonagh’s darkly comic and deeply painful Three Billboards Outside Ebbing, Missouri gives us a tough look at how anger and blame is one (ineffective) way of trying to handle very difficult feelings. We have Mildred Hayes (Frances McDormand), a bereaved mom: hardened, blunt, feeling uncharacteristically helpless, and furious about it. The town’s much loved and dying Police Chief, William Willoughby (Woody Harrelson) has gravely failed, in her estimation, to pay sufficient attention to the brutal rape and murder of her teenage daughter. What else is there to do, but take matters into her hands? Then, there’s the counter-phobic, racist, homophobic police officer, Jason Dixon (Sam Rockwell), soon to be de-starred and disenfranchised. Dixon abuses his power in violent and aggressive ways (because deep down inside he feels just as powerless as Mildred does.)

Yes, there’s a lot of anger in Three Billboards Outside Ebbing, Missouri, anger that’s out of control, destructive, and brutal. Where does the buck stop and how does that rage turn around for Mildred and Dixon – more alike than they might seem? We’ll soon find out.

Three Billboards begins as we travel with the camera down a deserted, foggy country road, mournful music in the background. Over to the right, we see long forgotten, weathered, and torn billboards, three of them. One car moves slowly along. It’s Mildred Hayes’ car, an old woody station wagon, traveling on a road she knows well, but living in a helpless mental state that’s just the opposite: all too unfamiliar. To put it mildly, she doesn’t handle it well.

*Spoiler Alert: Some Plot Details Will Be Revealed*

Mildred Hayes is not used to feeling helpless and out of control. Well, maybe she was – some place long ago in a childhood we know nothing about; and in her marriage to an abusive husband that abandoned her for a 19-year-old girl. She’s fought it though – by toughening up, getting really angry, blocking her feelings with mocking comebacks, and taking control.

But, now, that control doesn’t come so easily. Her daughter’s dead and no one’s doing anything to catch the killer. Mildred’s got to do something to manage her helplessness, right? Bingo – she stops, backs up, bites her nails, and stares at those three billboards lined up, one right after another, heading into town. And, you know what? She hatches up a real good plan. She’ll get the attention of those officers who’ve left her as worn out and neglected as each one of those billboards along Drinkwater Road, just outside Ebbing, Missouri, with its police station residing smack in the center of town.

The problem is – Mildred can’t face her feelings. So the plan isn’t only to get the authorities to attend to her daughter’s murder. It’s also to keep her sadness and guilt under tight wraps. Passing the buck is one way to do that. No question, she has every reason to be distraught and angry. The killer is still at large and the police are the ones charged with solving the crime. But, focusing the blame entirely on the police ensures that Mildred doesn’t feel what she doesn’t want to feel.

Jason Dixon, police officer, can’t handle his feelings either. Like Mildred, he’s always making his problems someone else’s fault. He’s as tough as she is, for his own reasons, a guy that tries not to look like a Mama’s boy, yet he sort of is. Plus Mama (Sandy Martin) is all too similar to Mildred: angry, callous, sarcastic, and cruel when she sees fit. Here’s how she coaches her son when it comes to his problems with Mildred’s determination to get back at the police: “Just fuck with her by fucking over her friends.”

He can’t be angry with Mama. So, it makes sense: Mildred is one good target. Plus, Mama’s controlling too and wants the last word, just like Mildred. He’s her “baby boy” and he knows exactly what’s expected, taking care of her ever since his dad died. He’s stuck. He’s filled with resentment. Other people take the brunt.

Underneath all his bullying, Dixon’s a pretty confused guy, self-doubting to say the least, and probably latently gay. To counteract his anxieties, Dixon’s a brute. After Willoughby dies, he finds the first possible excuse to beat up Red Welby (Caleb Landry Jones); the openly gay young man who owns a Billboard Company directly across the street from the town’s pretty racist police station.

In that horrifying scene, he finishes up by violently throwing Red out the second story window. Hating what he sees in Red and beating him to a pulp is one way that Dixon tries to get rid of his homophobic self-hate. Helplessness is something he won’t tolerate on any level.

Feeling helpless is bad enough for anyone, and that certainly goes for Dixon and Mildred. But, losing a daughter to rape, immolation, and murder is a terrible, terrible thing to live with. Especially when the culprit is at large and you’re left with overwhelming images and the mixed up feelings that come with that sort of trauma. Whose fault is it? Could she have done something to stop it? She tries not to remember that the night Angela died, they were fighting.

How does a mom live with a mean-spirited ex-husband (John Hawkes) who comes in with his mindless teenage girlfriend, fights with her, and says: “She asked to move in with me the week before she died because she was tired of fighting with you. I said no, your mom loves you. I wish I hadn’t because she’d still be here.” Does she rack herself with blame or rage at everyone else?

Mildred rages at everyone else, especially the cops. When she sees those three billboards outside Ebbing, Missouri, she drives straight to that Billboard Company owned by Red Welby and tells him she wants to rent those billboards for a year: “Those billboards that no one uses on a road no one goes down?” The police patrol that road every day, right? For Mildred, they’re the only ones that matter.

The Billboards shout their messages. The first says: “Raped while dying.” The second: “And still no arrests?” The third: “How come, Chief Willoughby?”

Why Chief Willoughby, a man everyone loves? Especially when he’s dying and the whole town (including Mildred) knows it: “And you still put up those Billboards?” “Well, they wouldn’t be as effective after you croak.” As far as she’s concerned: “He’s the head of the whole thing. The buck stops at him.”

Yet, does it? The war isn’t really with Willoughby.

The calm, patient Willoughby tries to explain that he’d do anything to catch that guy. He’s not cold about it. He’s not angry about the billboards. He gets it. He’s a feeling man. He understands Mildred and he cares about Dixon. He told Dixon long ago there’s too much hate. He tells him again before he dies: “if you want to be a detective, to detect things, you have to stop and think: Love, thought, and calm,” that’s what you must have.

But impulsive angry people don’t stop. They can’t listen to reason. They don’t want to feel. And when feelings take them over, they get rid of them, fast. They blame. They act out. They don’t think. So, where does the buck stop and how?

Can The Buck Finally Stop?

Not so fast. As soon as Willoughby dies, Dixon brutally beats up Red and the new Black (a shock to the racist Dixon!) Police Chief sees he’s unfit to be an officer. Next he’s the victim of Mildred’s rage – when she can’t stand her helplessness any longer and throws firebombs to burn down the police department after hours; not knowing Dixon is there.

By the end of his hospital stay and in the final scenes of Three Billboards Outside Ebbing, Missouri, Dixon’s turned a corner, though. Willoughby’s goodness rings in his head. He wants to be the detective Willoughby believed he could be. He listens and he thinks and he finds the probable suspect to Angela’s murder, in a bar, when he’s least expecting it. Just like Willoughby said.

Mildred has also been the recipient of Willoughby’s kindness. After all was said and done, he left her $5000 for another month of billboard advertising. Does it soften her? Sort of, in the end … you can only be angry so long. Plus, no matter how badly you feel about not being able to show your daughter how much you loved her, loss isn’t absolved through “an eye for an eye.” It’s only worked out by grieving, forgiving yourself; and by knowing you can change.

So Mildred and Dixon? In a surprising twist at the end of Three Billboards Outside Ebbing, Missouri, we see two archenemies finding common ground. Determined to take the law into their own hands and settle the score, they drive off, with shotguns, on a road trip together. Yet, as they do (with Willoughby’s voice ringing in their heads), they both face one hard question: will it be rage, blame, or … “You sure about killing this guy?” “Not really. You?” “Not really … I guess we can decide along the way.”

Hey, have they embraced Willoughby’s legacy – and actually stopped to think (and maybe even feel something)? If so, the buck just might stop there.