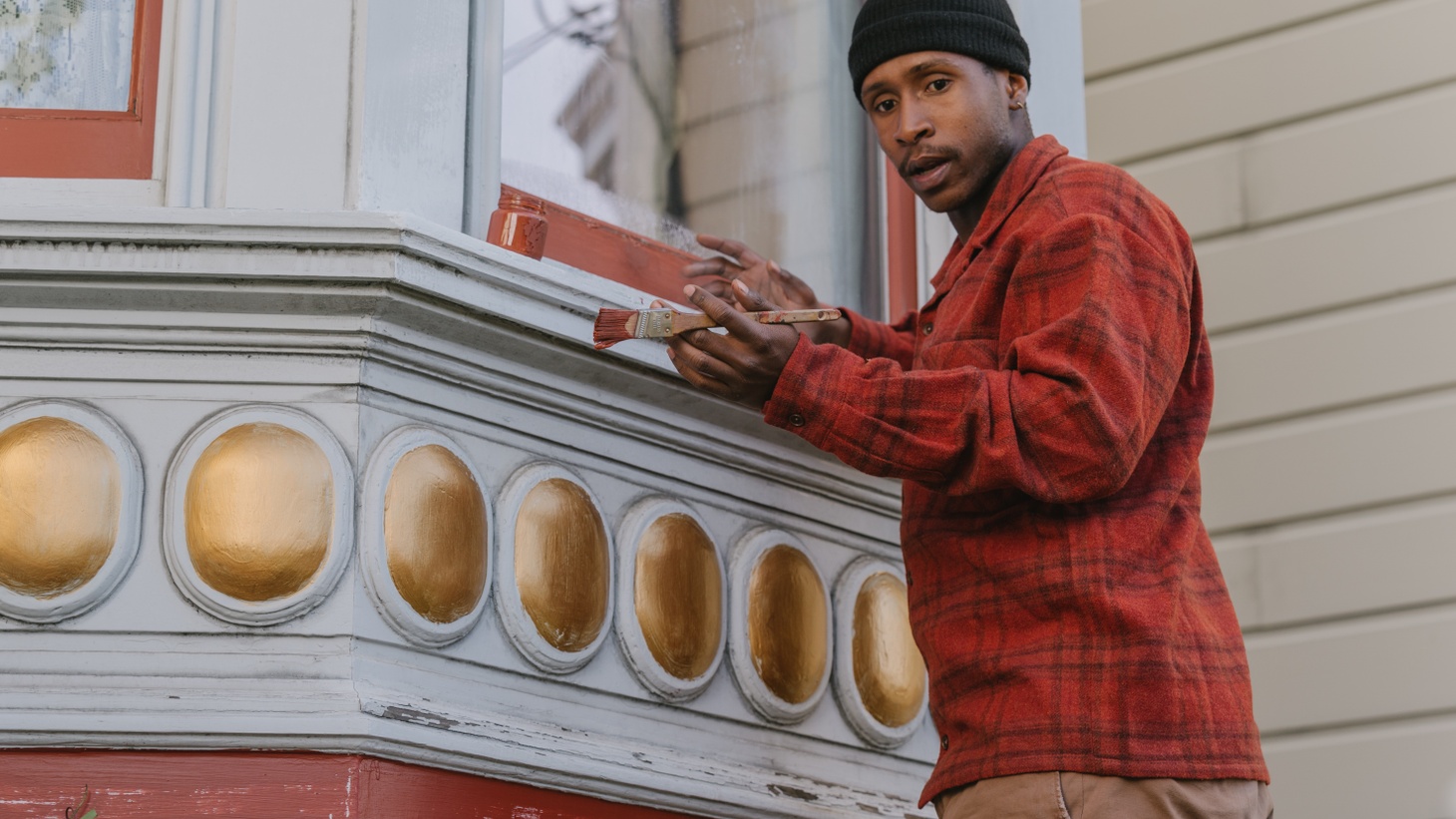 What are the basic ingredients in Joe Talbot and Jimmie Fails’s The Last Black Man In San Francisco? An old Victorian house. A young man who has no home. A mother who abandoned him and can’t keep him in her heart. A necessary fantasy. A Greek Chorus (that speaks the anger, hate, and under it, the grief).A gentrifying city that is taking everything away. “We don’t own shit,” is the mantra for what’s happening as the Blacks are pushed out of their neighborhoods. But, it’s a mantra that goes even deeper.

When your mom left you long ago and you lost the only home you ever knew, what kind of hope or control can you possibly feel? Over anything.

Ok, I’m a psychoanalyst and I tend to see things in films. I don’t mean to usurp the deeply moving story that Fails and Talbot tells to cinematic perfection in the film, The Last Black Man In San Fransisco.

But, since the film story of Jimmie Fails is, according to his account, only 20% autobiographical, the fictional character of Jimmie gives me much food for thought.

I can’t help but look more deeply into Jimmie’s fantasy about the house. A fantasy he has to hold on to dearly. Why is this fantasy so important?

Why, too, his urgency to reclaim the only home he’s ever known? And, when he can’t, what’s the meaning of his note to his best friend, Montgomery, and his disappearance?

A Young Man Without A Home

The old Victorian house sits perched on a hill. Jimmie lovingly tends to it. Trying to restore it to the way it used to be when he called it home; not neglected by its current owners. As neglected as Jimmie has been, it seems, for a very long time.

What’s a boy to do? Fend for himself; be taken in by a loving best friend; never feel he really belongs anywhere? A homeless young man, alone in a changing city and in the remnants of a life that was taken away without his say.

Nothing is as it was. Or how he needs it to be.

Jimmie lives with his best friend, Montgomery (Jonathan Majors) at Montgomery’s grandfather’s house (Danny Glover). Jimmie feels like an intruder; like he doesn’t really belong.  He doesn’t. It’s not his home.

Jimmie had a home. And, he lost it.

There are many hints in the film about why he feels the way he feels. He lives his own sad and seemingly isolated life. Doing his level best. Jimmie’s mom is absent. And, clearly, Jimmie’s dad has no place for him.  Not any more.

Jimmie’s dad lost the house they lived in, the only home Jimmie ever had. And, it seems, he never really had a home in his mother’s heart. The home every child needs.

For most of the film, we’re left wondering what happened to Jimmie’s mom. That is, until she shows up on a bus, a mere fellow passenger, barely recognizing him.

She’s detached, to say the least. Unenthusiastically greets him. And, makes a promise to visit soon (but doesn’t). One more, surely, in a long list of broken promises.

And, we see the effects on Jimmie. As resourceful and determined as Jimmie is.

Not owning “shit” is what happens when you don’t have any control. You either try to get some in any way you can, or become angry and rebellious, or try not to care.

Another option: you give up.

All these have their place in The Last Black Man In San Francisco.

Gentrification isn’t the only thing that sets off “we don’t own shit.” Gentrification as a culprit is there at the center of The Last Black Man In San Francisco. Pushed out of their neighborhood by more affluent “others” taking over.  That’s a big part of the story.

But, maybe the even bigger part is the frustrating experience of having no say in the matter.  That’s what happened to Jimmie as a kid. He had no say in losing his home.  And, anyone in this position is left with a lot of anger. Even more so, grief.

If we think of the Greek Chorus in the film, four Black compadres, still hanging around the neighborhood, they stand for the rebellion and anger at the polluted waters and contaminated fish, and the White intruders in Hazmat suits, “cleaning up.”

Yes, others have come in and cleaned up at their expense.  Taking what used to belong to them. With no second thoughts about what that means or how they’re left to feel.

Loss is all around.

The neighborhood has been taken over. The city’s changing and out of their control. There is a protest in the Greek Chorus’ anger.  Anger as necessary to them as Jimmie’s fantasy (that his grandfather built the house) is to him.

Anger creates a first line of defense. A wall around feelings that are otherwise unbearable. Powerlessness. Deprivation. Jealousy of what others have and you cannot.

Anger builds a hard barrier. Tough to breakthrough. But, sometimes, that fortress is shattered. As with Kofi’s (Jamal Trulove) death.

Jimmie and Montgomery challenge the Chorus’s tough facade all along. Not openly, but in their very differences. By their lack of anger. The ways they work with their losses and deprivation to try to overcome them.

But, when Kofi dies, Jimmie just might be a convenient target for the anger (and he is), because he’s soft. Because his caring shows. Yet, instead, he becomes the one that holds and contains and comforts – one of the Greek Chorus’ members as he collapses into Jimmie’s arms and sobs.

That grief is not just for Kofi, although that there is; it’s for all that’s been taken away. Yet, who has been there to hear Jimmie’s grief? Grief he can’t let himself feel.

How A House Replaces An Absent Mother

“Who” is the lost Victorian house?

And, how does it help us understand Jimmie’s grief? It’s not just about the old Victorian home he lost when his grandfather died. And, it isn’t the old San Francisco either, slipping out of his hands.

I would venture a guess (from the small nuances the film reveals) that Jimmie’s biggest loss is the loss of his mother. We see, from her tepid greeting on the bus, that she left him long ago, both physically and emotionally, and isn’t a mom at all.

So, what’s in the lost house, the one that used to be Jimmie’s home? The one he must reclaim and make his own. The one he’s determined to (and does) move back into.

That house was a home and yet, a real home, to a child, is mother. Our first home is mother’s womb. Birth isn’t easy. But, actual abandonment is much, much worse.

Jimmie’s grandfather provided the more stable home. So, Jimmie’s fantasy, in the absence of the seamlessness of a mother’s love, was that his grandfather built this house. Not just bought it. He built it for them. For family.

And, then all was lost. He had no home anymore. And, he’s been in a state of (desperate) longing ever since.

When loss is too much to bear, a necessary fantasy quite often comes into place. That’s why Jimmie needs to believe his grandfather built the house that used to be theirs.

What’s A Necessary Fantasy All About?

When reality is too painful, fantasies are created. They’re necessary self-protections. Especially if there is nowhere else to turn.

But, why that fantasy? All fantasies have specific reasons and meanings. They aren’t arbitrary; the unconscious mind is quite specific in its choices.

If Jimmie’s grandfather built the house with his own hands, then he would become the caring “mother,” (the warm provider) who gave Jimmie the home his mother did not.

His father, although a part of it, couldn’t keep the house. Jimmie was displaced to a group home.  Far from the home he had.  And, far from the family that a young boy needs.

The fantasy took residence in Jimmie’s mind. He needed it. Had nothing else. No one in his life. If Jimmie’s grandfather built it, not bought it, wouldn’t it mean that Jimmie had a permanent right to it? That it was still his?

So, despite all evidence of architecture and period dating, Jimmie professed to anyone who’d listen that his grandfather built it in an earlier style, with his own bare hands.

That’s love. The ultimate of making a family home. A stable love Jimmie didn’t have. Yet, Jimmie loved and cared and never abandoned that house.

As his mom had never cared for him.

To the two young women on the bus, Jimmie says: “If you don’t love San Francisco, you don’t get to hate it.”

Why not? Jimmie loves San Francisco, we know that. But, why preaching to strangers? Who else does Jimmie love, but can’t quite allow himself to hate?

Remember.  The last time Jimmie rode the bus, his mother was his fellow passenger.

It’s his mother he loves. Now he wears indifference in place of hate. Hate could blow everything apart. Look at what happened to Kofi.

Yet, Jimmie’s indifference was easier when he thought he had the house.

Remember.  He told his mom he’d moved back in. And, his loving tenderness towards that house made it a home. He was living in it, embraced in its warmth.

A warmth he needed.

But, then, Jimmie couldn’t find a way to buy it, to really make it “his.” And, once again, he is out on the curb with all his belongings. Repeating the traumas of his mother’s abandonment and his father losing the house and giving him no other place to live.

Now, he feels hate towards the gentrifiers. The people who don’t care about those who lost their homes. Yet, the gentrifiers and the girls on the bus are, in his unconscious mind, his mom and dad.

And, hate is a difficult feeling to justify when it’s mixed with love. Especially when no other love can really replace it, and it’s too scary to trust.

Jimmie’s disappearance at the end of The Last Black Man In San Francisco is a shock. We don’t really expect it.

On the one hand, it’s a statement of what’s been done to the Black’s. They’ve been pushed out. Made to leave.

But, doesn’t the character Jimmie, in a whole other way, give up on love?

As with many adults traumatized as children, he retreats from people that do love him and goes away into a different form of self-protection.

No longer living his necessary fantasy, he shuts out his best friend and gives him no way to find him. A friend that believes in him, loves him and is there to help.

If Jimmie can’t have the fantasy he’s been holding out for, he won’t let himself hope for something different. And, that’s the sad tale of childhood trauma.

I’m Dr. Sandra Cohen, a Los Angeles based psychoanalyst and psychologist. I specialize in the treatment of childhood trauma and write about the human struggles we see brought to life in film characters on the big screen.