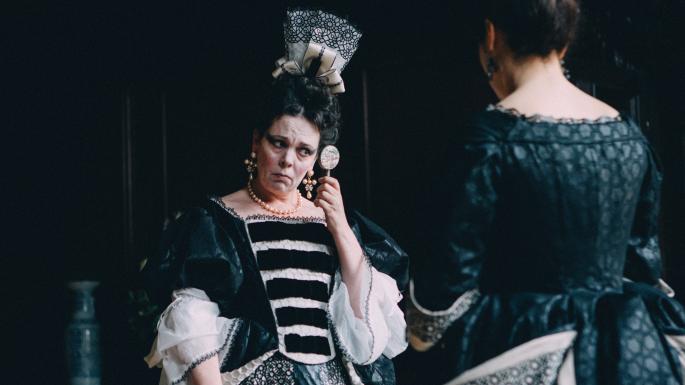 10 Jan THE FAVOURITE
Mirror, Mirror: How Does Envy Play Its Part In Sexual Favors To A Queen?

The historical jury is out as to whether Queen Anne of England (1702 -1714) and her two ladies were actual lovers. Yet, sex makes for a good story; and sex wields power – in both what it has to offer and withhold. Envy, though, is the real name of the sexual game at the center of The Favourite.

Envy brandishes a potent weapon; lurking as it does in the subterranean trenches of those complex relationships between Queen Anne (Olivia Colman) and Sarah (Rachel Weisz), her first lady, confidante, and maybe lover – and Abigail (Emma Stone), Sarah’s younger cousin and sudden interloper.

As Yorgos Lanthimos’ The Favourite opens, we’re introduced to a Queen too troubled to lead her factionalized country at war with France. A Queen left infantile, needy and helplessly bereft by too many losses. Seventeen babies in all, replaced by seventeen (fictionalized) rabbits that consume her attention and her bedroom.

The bedroom is the place where Queen Anne’s ladies in waiting, Sarah (and later Abigail), serve their Queen (in all the trappings of their jealously and rivalry) with the sexual attentions she commands. To gain her favor.

In the Queen’s lavish bedroom, where the invalid monarch retreats and director Lanthimos with his writers, Deborah Davis and Tony McNamara, have set the major scenes in The Favourite, unfold’s the film’s dark twist.

Envy, a greedy tricky beast, drives Sarah and Abigail’s quests for power. Queen Anne, also, harbors her own envy. Each character has distinct, but similar, reasons. Remember that epitome of envious Queens in Snow White and the Seven Dwarfs? Asking the spell-bound mirror: “Who is the most beautiful of them all?”

In The Favourite too, each of our three women is vying to be the recipient of that prize. For each it is to be chosen, to be the one desired; the only one in the other’s gaze. Whether it is the Queen, in Sarah’s eyes or later in Abigail’s, or (for most of the film), those two ladies feuding for the favor of the Queen’s attention. Attention that offers great position and power.

So, mirror:  Who is the most envious of them all?

Is it the Queen? What could she envy? She’s the Queen after all.

But, there’s a lot for her to envy, we come to see. Queen Anne knows she’s supposed to lead her country, but she can’t. That enfeebles her and creates a terrible predicament when she wants to feel all the dominance and respect that is her due.

She’s frail. Physically. That’s clear. But even more to the point, Queen Anne is emotionally compromised.  She’s more a child than a queen.

Her opulent wheelchair, the one she commandeers Sarah to chauffeur – functions much like a toddler’s stroller. With a demanding, insistent, petulant “won’t take no for an answer” little girl at the helm.

The Queen’s weaknesses shame her; faced as she is with others who are smarter, more competent, and more knowledgable about her country’s governance needs. She has other preoccupations, so allows Sarah to run the country and the war, for a price.

Queen Anne can’t function independently for many complex reasons. And, yet, her neediness conflicts with her queenly pride.  And, when the her humiliation is more than she can bear, she “goes off”; yells and throws a tantrum as children do – and, then she asserts her authority.

It doesn’t matter what is good for the country. Her decisions have the intention only of showing her subjects that she is the one in charge. But is she? Or is Sarah? Or, what about Abigail when she enters the scene? Here’s the rub:

Queen Anne envies all that Sarah has – her beauty, her intelligence, her confidence, her strength. They’ve tried to keep the pretense that there’s a level playing field between them (as much for Anne as for Sarah); ever since childhood. The motive for nicknaming  each other “Mrs. Morley” and “Mrs. Freeman.”

Yet, it will never be level on either side. A Queen is a queen after all; and there’s not much higher to go.  But, in Anne’s inner world of insecurities, she doesn’t feel very high at all and she unfavorably compares herself to Sarah. When her envy of Sarah takes over, Queen Anne uses her queenship to balance the imbalance she feels.

And that, in the world of The Favorite, is the way sex can be used to feel good; desired; wanted; beautiful; to feel power over another;  because none of these characteristics is Anne confident she has. When the sexual favors aren’t enough, Queen Anne employs her weighty title to its fullest extent to get what she wants.

She screams like a banshee. Yells. Tantrums like a small insolent child. Because,  she can.  Yet, Sarah has her ways to keep Queen Anne in check. For awhile.

Cunning, that’s what Sarah is. And, manipulative. Her manipulativeness is for the well-designed purpose of taking the control she wants.

To Sarah’s advantage, she’s known Queen Anne since Anne was a very young Princess; when they were schoolgirls together and best friends. With well-crafted purpose, she started giving in to Anne’s whims way back then.

Yes, a Queen’s lofty position is to be envied – when it comes to some like Sarah. So, Sarah must find a way to work around the power of Anne’s birthright.

A smart girl and an even smarter woman now, Sarah Churchill knew there was much in this friendship to gain; that is if she found a way to stay on the inside and give Princess Anne, now the Queen, what she wants. This is how Sarah manages her envy of a Queen’s power.

It’s not easy for Sarah, who needs to see herself as a woman with influence and authority, to be accountable to a woman with more power than she. It helps to know all of Queen Anne’s weaknesses. To use these weaknesses, is another strategy for quelling envy’s protests and screams.

Self-assured where the Queen is not. Hungry to win political victory for The Whigs, Sarah will have control. As Queen Anne’s now-confidante she has easy access to the Queen … and, more importantly, the Queen needs her.

Yes, Sarah is as shrewd as Queen Anne is compromised. She knows what Queen Anne needs. That makes them a well-matched pair. On each side of the relationship, they are “friends with benefits.”  Evenly configured; they are not.

Sarah has everything Queen Anne doesn’t. Sarah is as confident as Queen Anne is not.  That is to Sarah’s ultimate advantage.

She uses Anne’s insecurities to keep her finger on the power-prize. Even to the point of demeaning how Queen Anne’s face looks with her poor evening make-up job (although it just happens to be the cold harsh truth).

Yes, Sarah has a hold over Anne. The tincture of wits and guile. Sarah knows exactly what she wants and how to get it. That is, until she becomes threatened by an intruder. Until what comes upon the scene is Abigail, and the power of another’s appeal. Of sexual and cousinly rivalry.

Envy and jealousy makes all three women lose their their bearings.

Abigail Hill (The Lowly Cousin; Later Elevated to Baroness by the Queen)

Opportunistic.  That’s the name of Abigail’s game. Although we’d never know it at first; that this exists underneath her apparent innocence, sweetness, and soft beauty.

If not in history but certainly in The Favorite’s version of long ago, Abigail’s evil intentions are stirred after Sarah cruelly uses her position with the Queen to keep her pretty cousin down; not helping the traumatized Abigail as she certainly could.

Abigail has her own smarts and cunning. After all, she’s had to survive a father who sold her off to pay his debts; threw her to the wolves that inhabit brothels; made her sell her body for sex already once – in order to survive.

She knows this game and she knows it well. Turns out; much better than her opponent.  If bawdy, rowdy, rough men can use her body, with nothing at all to offer in return for the abuse, she certainly can sell herself to a fragile and needy Queen.

Plus, there are many possible benefits to this arrangement, not meager ones or few:

Rising above the place she’s fallen; getting back at her more fortunate but mean-spirited and selfish cousin. Plus: success is being the best tasting fruit of all revenge; on everyone who has debased and burned her.

Feminine guile and sexual weapons drawn and readied, the duel begins slowly, but soon picks up speed. Beginning with Abigails’s apparently “sweet” ministrations (but we soon realize quite calculated), of salve to the Queen’s wounds.

The Queen too knows just how to play the two against each other; she has her own hungers; and she’ll see who has more to offer in the end. Plus … two are better than one in satisfying her needs.

She rather enjoys riling up these cousins to war for her favor. It allows her to experience an importance and allure she can feel only by exploiting the queenly rule she holds over her two subjects heads.

Sarah and Abigail’s war, then, must be fought more ferociously between them. Each having too much to lose.

But, truly, their blows are inflicted with the sharpness of swords driven by the threat, resentments and hostility that each one harbors in the darkness of her envious heart. Each determined not to let the other win.

In the end, Abigail pulls the most vicious punch of all.  Poisoning Sarah to confuse her, send her away; make the Queen feel betrayed and abandoned; and to show Sarah just how it feels to be the lowest of the low.

So, Mirror, Mirror … Who Has The Most Envy Of Them All?

The jury is definitely “in” on this question. Abigail; without a doubt is the most envious. Envy and jealousy makes all three women lose their their bearings. But, does this make her the ultimate champion?

Suffice it to say that Abigail gets the prize (if it is a prize at all) for being the most destructive of the three; with her envy getting the best of her on all counts. Yet, envy is not something to be proud of; it is ruthless and has its backlash. Envy brings a different kind of defeat.

But, such extreme envy can be understood and doesn’t come without cause. Abigail has her history.

Her sudden poverty and loss of status; the betrayal by her father; the abuse of men; desperation; envy of her cousin’s position and easier life; her cousin’s cruelty; increasing Abigail’s shame when she arrived at the palace.  All this made her hate Sarah.

No, Sarah would not be the winner. Not if Abigail had any say in the matter. She could match her wit for wit; cunning for cunning.  Abigail had it in her to be the crueler one.

Poisoning Sarah; so that Sarah ended up in the same demeaned state. Lying to the Queen, so the Queen would not take Sarah back. Sarah would lose everything.

Yet, there are no winners – when Envy’s monstrous visage must have the last laugh.  We see it in The Favourite’s final still shot: Queen Anne and Abigail’s faces; juxtaposed but equally stunned at where they find themselves.  Stuck only with each other.

The Queen has lost her best friend and confidante; being taken in by Abigail’s seductive tricks; tricks that played into the Queen’s own distrust and envy. And, Abigail with triumph as her consuming goal, gains a Ladyship, yes; but gets no prize; only an infantile, demanding, Queen to take care of.

These are the spoils of Envy’s greedy game; which, when all is said and done, is bent on destroying anyone in its way.

Sarah banished, The Favourite ends with Abigail and the Queen suffering no less. There isn’t any real happiness.  Not a satisfying life in sight.