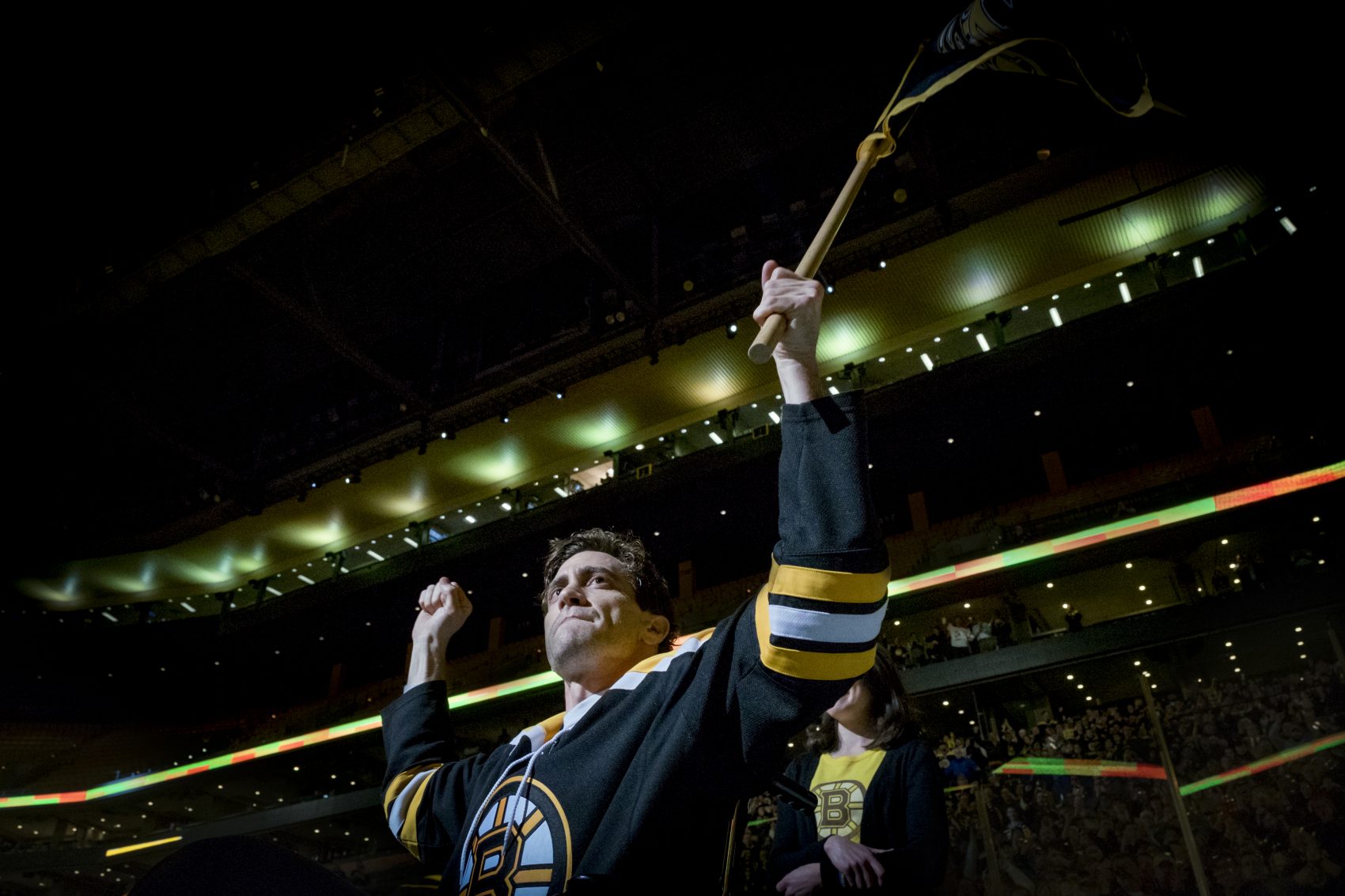 PTSD always follows trauma. No traumatized person is “strong” enough to escape it. Yet, for complicated reasons, Post Traumatic Stress symptoms are too frequently off everyone’s radar, particularly the radar of the one suffering. The reasons are both straight out of the DSM-V and very individual. Jeff Bauman’s story in David Gordon Green’s powerful new film, Stronger, with Jake Gyllenhaal’s deeply moving performance as Jeff and Tatiana Maslany’s complex and engagingly real portrayal of his girlfriend, Erin Hurley, is a good place to start understanding what happens after trauma.

Stronger is a film that inspires and a film that makes you cry; Jeff Bauman’s story of resilience, immense struggle with old demons, and courage. It’s a beautiful story of love. The right kind of love is healing. That love is there in Erin’s sensitivity and understanding. I’m a psychoanalyst, though. I can’t help thinking about the not-so-obvious aftermath of trauma, which is not just about recovering, going on bravely, and “aiming high.” Healing is also about getting help with the often hidden symptoms of PTSD.

The elevator scene, after Jeff and Erin leave the Boston Bruins field, shows us one of trauma’s powerful consequences. We suddenly see Jeff screaming at Erin; and at first we don’t know what’s happening. It’s a flashback. He’s reliving the bombing. This is one of the most revealing scenes in Stronger because, in it, we see a lot about what’s really happening inside Jeff Bauman.

I’m going to take the liberty of a little speculation about the elevator scene, and I hope that’s ok with Jeff since I don’t know him. To me, as a psychoanalyst working with trauma and PTSD, we see, in the elevator scene, how one man might try to manage terror. Terror, under any circumstance and with any kind of history, is difficult to handle. Plus, each person has his own unconscious conflicts and old ways of coping that are inevitably stirred up. Stronger provides a good forum to discuss what triggers a flashback.

In the elevator, Jeff is screaming: “Go away. Don’t help me. Help them.” Jeff is reliving exactly what happened after the bomb went off. Every traumatized person has flashbacks. Yet in each person, responses to trauma have their own meaning. What stands out to me is this: “Don’t help me. Help them.” Help, for Jeff, seems difficult to need. There are quite good reasons for this.

We see how Jeff’s mom handles things. She drinks. A lot. So does Jeff. So does the entire family. Alcohol is their way of coping. It’s a way of getting rid of feelings and needs. We see what a hard time his mom, Patty (Miranda Richardson), has with hers. She’s an alcoholic because of it. How Jeff uses alcohol to escape (whether from needs, feelings, intimacy, or fear); is a part of Jeff’s “not showing up.”

“Not being there” is what happens in dissociation, and dissociation is symptomatic of trauma. Traumatized people often describe the experience of trauma as if they were watching “someone else” from above. Jeff is already prone to detachment when things are tough. It’s hard to live with a mom who can’t cope with her feelings or “show up” for his; and, because of this, is too frequently drunk. Any child in this situation or with a similar history (whether love is there or not) learns early not to count on anyone and, usually, to hate his own needs.

Jeff’s response to Carlos Arredondo (Carlos Sanz), who comes to help him right after the bombing, is no surprise then: “Don’t help me.” “Go help someone else,” means – “I don’t need help.” Trauma triggers old emotional struggles.

Trauma haunts. Dissociation doesn’t work. When feelings are denied, their ghosts revisit. Flashbacks inform us what hasn’t been worked out. Jeff doesn’t want to bother anyone. He can’t tell his family what’s going on. He never could. He doesn’t want to “disappoint them … it’s better they don’t know. They’re trying to make a hero out of me.” He’s supposed to be “strong man Bauman, Boston Strong.” No one sees his pain and loss. Understandably, he doesn’t want to know about it either.

Jeff is actually saying, “Go away,” to his feelings and his terror. Maybe it’s not a far stretch to also imagine that when he says: “Go help someone else,” he wants to believe; “I’ll be fine on my own.” This is his long time version of strong.

Flashback # 1: In The Elevator

Context of the Flashback:

Jeff has been going along with what everyone wants of him. He’s a good sport, he makes jokes about the loss of his legs; showing how strong and resilient he is. He’s everyone’s hero – the whole city of Boston’s and his mom’s: “You’re very special, Jeffrey.” “My son’s a hero. He’s helping the city.” Being in the spotlight with her hero son has changed Patty’s life, but what about him? He’s saving his mom, but who, besides Erin, is helping Jeff? Patty even thinks she’ll get to meet Oprah (“where would I be without her?”) Patty comes first. Jeff’s old way of putting his needs aside has to continue.

It makes sense, then, that allowing help is a threat – and Jeff turns away from Erin’s offer to help for quite some time. That is, until he asks her to go out on the ice with him to wave the flag for the Boston Bruins: “I know we aren’t together; I know it’s not fair to ask you; but I really need you right now.” He’s scared and vulnerable and it’s the first time he cries.

The flashback happens in the elevator after Jeff and Erin leave the Boston Bruins event. He’s screaming at Erin and pounding on the elevator walls: “Get away from me. Go help someone else. Go help someone else.” He’s helped his mom in her alcoholic stupors. He’s told his feelings and needs to “get away.” He’s had to be strong. Now it all comes back – not only the trauma of the bombing, but all the feelings and needs he’s never had a chance to express. The only way he knows – is to tell them: “Get away.”

Needing Erin likely comes with serious fears and complications. I’ve seen it many times and I’m sure the flashback’s trigger must have to do with his conflict between admitting he needs Erin and being in the middle of Boston fans promoting him as the public image of “Boston Strong.” Strong is what he feels he has to be. Jeff has used alcohol and dissociation to (sort of) make his feelings and needs “go away;” but, really not.

Context of the Flashback

Jeff’s fans want to believe: “You didn’t let the terrorists win.” He knows differently: “From where I sit, I think they sort of did, they got my legs.” What he doesn’t know is that he’s running from the real terrorists – those living inside him; his memories of the bombing and all the feelings he has in its aftermath. He runs away by tying on a bender, driving a car with his drunken buddy at the pedal, and not showing up for Erin (or his own needs).

Erin’s pregnant; and Jeff can’t handle it. He doesn’t know how to manage her needs for him (or a baby’s). He’s terrified of “fucking up.” The pregnancy; his fear of failing; of not being good enough; of repeating with his baby what was done to him; make him unable to rise to the responsibility. They fight. She loves him and she’s taken care of him, but he’s walked away from her for last time. She walks away from him; leaving him alone to find his way from the car, on his hands and knees, all the way upstairs to his apartment.

He’s yelling: “Don’t walk away from me, Erin, don’t walk away from me. I showed up for you and look where it got me.” He has images of his legs after the bomb went off. He’s crawling from the car, towards his apartment. He’s pounding on the door to his building. Erin’s gone. No one is in sight. He relives Carlos’ putting tourniquets on his legs. He’s been fighting his need for anyone, because: “Look where it got him.”

Not being able to accept the responsibility of a baby shows Jeff, in a different way, that he doesn’t have strong enough legs to emotionally stand on. No one was there to help him as a child (and look where it got him). Wanting and needing Erin is a dangerous thing. Now, Erin needs him – and he’s terrified. The trigger is this: being faced with helplessness, with his old terror of being alone as a child; he’s struggling with the biggest emotional conflict inside anyone with a history similar to Jeff’s: “I don’t need you, but. …Yes, I do.”

“Don’t let the terrorists win,” is Boston’s mantra. How do you not let the internal terrorists win? Jeff keeps trying to blot them out with alcohol: “I don’t want to relive the worst day of my life.” Yet, he is reliving it in his flashbacks. Terrifying feelings and memories must be faced; with someone who knows.

That help comes in the form of Carlos Arredondo. The man who saved his life saves his life again. They meet and Carlos tells Jeff his own story of not being able to face trauma; how he couldn’t “show up” for one of his sons. He’s grateful that Jeff helped him to not run away again, even though he wanted to when the bomb went off. In Carlos, Jeff comes face to face with that terrible day. Not through intrusive flashbacks, but by looking into a kind and understanding mirror, of regrets he too might have if he doesn’t stop running.

Jeff Bauman goes on to become a husband and a dad – showing the world (and himself) that his injuries won’t hold him back. He “aims high,” just as Pedro Martinez advised him to do on the Red Sox mound. Aiming high is important. But it’s a different kind of strength that Carlos Arredondo gives Jeff: the strength to face the memories; with all the feelings and fears they bring. That’s the only way flashbacks, with their ghostly reminders, will end. This cannot be done alone; not without someone who truly understands PTSD.