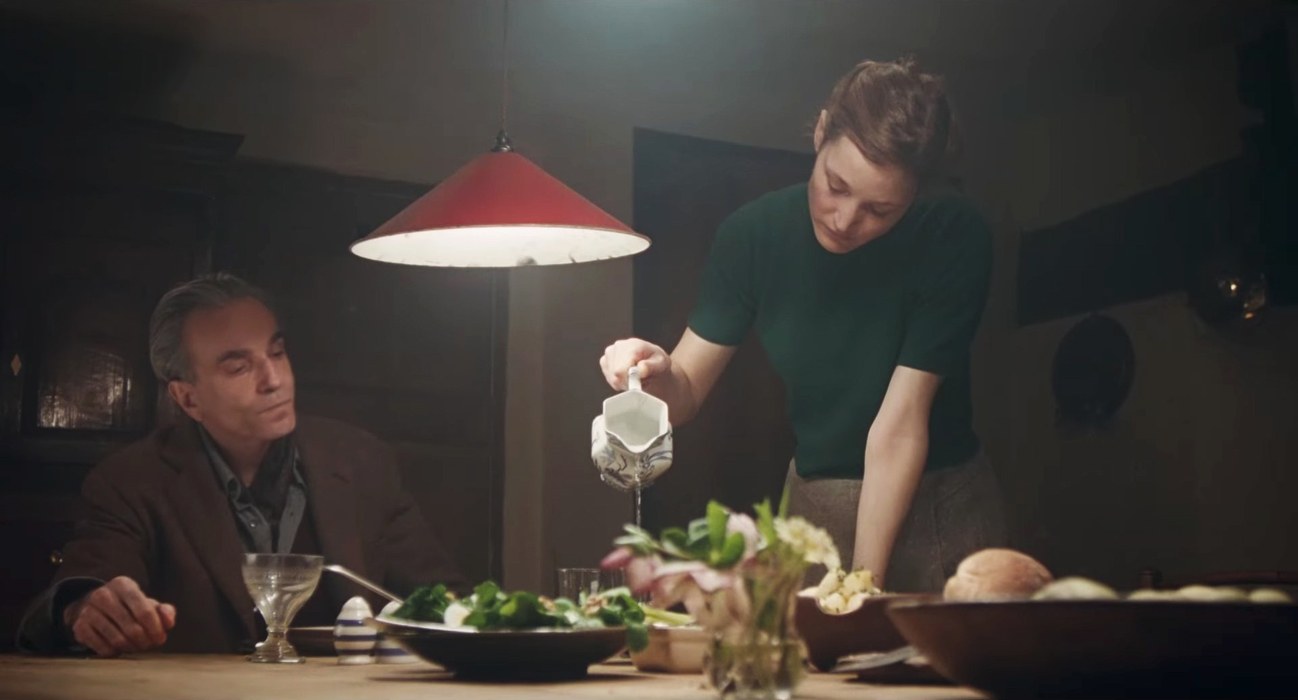 Paul Thomas Anderson has done it again. He’s a master at exploring the various kinds of perverse power games involved in problems with dependency and love. Anderson’s new film, Phantom Thread, is another brilliant character study to add to Boogie Nights, Magnolia, The Master, and Inherent Vice (to name a notable few). In Phantom Thread, burning at the heart of the sick game Reynolds Woodcock (Daniel Day Lewis) and his Alma (Vicky Krieps) play, we wonder once again: who’s the one in power? And what is the need for it? Plus, we also can’t escape asking: what exactly is the phantom thread woven into all Reynolds’s garments, but most particularly, into the dangerous game Reynolds and Alma play?

Is it “always” about the mother? Not in every case – but here in Phantom Thread it is. Reynolds’s mother haunts him, standing aloofly aside, a ghost of memory in her wedding dress. The one he sewed, especially for her, when he was just a young teenage boy. He wanted to please her. And he would do anything to be as close to her as he could.

But if she was as aloof in life as she is in his memory (and her death) he couldn’t get close enough. There she is, this phantom mother: cold, unsmiling, clearly out of reach. And, he can’t get over her loss. A loss he couldn’t control.

Reynolds’s sister, Cyril (Leslie Manville), is a constant in his life and work (he’s a sought-after couturier in London at his House of Woodcock.) But she’s her mother’s daughter, as he’s his mother’s son. How can they connect to anyone? Even to each other. It isn’t safe. Lonely kids, they’re lonely, isolated, adults, expecting to be hurt or left. They won’t let that happen again.

So, Reynolds has never married. Neither has Cyril. And, brother and sister are inextricably linked, needing each other (they have no one else) but also needing control. They can’t let down their prickly guards to allow affection or softness. That’s dangerous for children helplessly unable to get the love they need. Moreover, that fear doesn’t stop, becoming just as dangerous in adults who still have that lonely, scared child living inside them.

Now, in The Phantom Thread, Reynolds controls women through the making of their garments just as he controls any woman who dares get close to him at all. He wants a woman there, but he holds them at arm’s length – just as his phantom mother kept him and now keeps him in her death.

Reynolds must have his way; no one can make him deviate from his obsessive rules; or his overly structured and tightly wound life. He must keep to his schedule, the way he eats, and when; but mostly he must keep all emotions under unyielding restraint. He must control his emotional hunger.

With a deeply unresolved mother loss – whether it’s because she died too early or was unreachable in life (I’d guess both for Reynolds Woodcock) a hungry boy must keep his need for love in check.

Yes, Reynolds Woodcock always has a woman – but at his beck and call. Then, he meets Alma – a young waitress. She’s different. She’s got spunk. She talks back. She gives him a run for his money. And, from the beginning, whether she knows it consciously or not, she’s also got his number.

We see how their first meeting unfolds. He gives her his huge order (and, being his demanding self, insists she repeat it all back without looking at her notes). Then, he asks her to dinner. Alma is one step ahead, tearing off a piece of paper with her number and the inscription: “For the hungry boy.” She’s already written it out, just for him. She’s offering herself even before he has to ask. And, just maybe, this is the first indication of their sparring for control. But who will be on top?

Well, Reynolds is a hungry boy; hungry for a mother’s love; a desire and dependency he cannot allow. He has to be the one in charge. But he’s enamored; Alma’s a beauty; and … she’s the perfect model for the new line he is ready to debut.

A Different (But Scared) Girl

She may have him under her spell, but he also has her under his; standing for hours as he pins and sews and measures; as he shows her off on the runway as his creations are unveiled. He has her. And, yes, she’s enamored too; of the life, he’s given her, a poor girl who, in another world, didn’t have a chance.

But, unlike the others, Alma’s feelings are on the surface, and she will not be controlled or rejected. She has a mind of her own. She’s not like “them.” Those other women (a collection of “she’s”) – sat back, silent, unhappy, and as on the periphery of his life as Reynolds felt as a young boy with his mom. When “she’s” expressed the least little dissatisfaction with her position in his life; he discards her. This is the rule of love. Don’t let anyone close enough to have any control. Especially, don’t want her or need her not to leave.

Alma, though, she’s different. Reynolds starts to love her. And, his need for her (for a mother’s love) is stirred deep inside. This puts him in danger. He cannot let her get too close. She wants to be alone with him; to make him a special dinner of her own; she wants to feed him; to love him; to have him depend on her. She knows she needs him, but he will not need her.

So, he tries to make her leave, just like the others; which she is not. Alma will not lose him. And she crafts up a shockingly unique plan; a game she’s determined to play. Who will triumph in the end in The Phantom Thread? We will see. But Reynolds Woodcock, who’s always had the upper hand, has met his match.

In Alma’s plan – Reynolds will not reject her and she’ll be quite certain that the hungry boy living inside him cannot reject his needs. Alma will make him need her. She’ll seduce that hungry boy into a situation where he has no choice but to depend on her and to accept her care. That care will be irresistible. He won’t be able to live without her. And, as the film unfolds, we see that he can’t.

Alma mixes up a potion, of poison mushrooms in Reynolds’s tea at dinner. Yes, she’s as good a chemist as she is a model. She figures out just the exact amount needed to make him so deathly sick he can’t move; and can’t take care of himself. But – not enough to kill him. She’s got it down to a “T.”

Each time Reynolds starts to drift away from her; becomes too controlled, or distant – Alma gives him another dose. And, voila! He needs her to nurse him back to health. So, Alma has him under her spell, right?

Or does she? There’s a twist in The Phantom Thread; as there is in any perverse game played between two people frightened of love and loss. Right when Alma thinks she has him; it looks like he’s outsmarted her. Or, has he?

The Dependency Game Goes On … Until

At the end of the film, Alma and Reynolds sit down to another dinner (now married – in a not such an easy union). She slowly and seductively pours him a cup of tea; and suddenly we see a glint entering Reynolds’s eye. And, we know. He’s figured out her game. Made himself a willing participant. And he’s enjoying this – just as much as she is. She doesn’t have as much power as she thinks. Does this give her pleasure? Maybe.

Because – just maybe – this game of dependency is the only way these two broken and frightened lovers can be together in an intimate and dependent way. It certainly works for him. The hungry boy can get the mothering he longs for, with the fantasy that he has still come out on top. Reynolds is sure that he’s got her number now. Not so fast.

The Dependency Game & The Phantom Thread

We can’t help but ask: what is that phantom thread; the message sewn into Reynolds Woodcock’s garments; threaded through the film; and through his fears of women, of emotional hunger, and of love? It’s his mother, of course. The mother he couldn’t get close enough to; the mother he lost to death. And, with Alma, he gets as close as he “safely” can.

Alma, too, gets close to Reynolds (and has control) in her way. And, Anderson, as always leaves us on the edge of our seats. With the power-phenomenon, he displays in Phantom Thread, it is no different. The 60-million-dollar question hanging in the air at the end of the film is this: Who is the winner and who is the loser? Or is there one?

I’d say it’s a draw. Or maybe, better yet, it’s a truce of mutual need; a truce that’s as perverse as it gets. But perversion is, at its heart, a solution to early trauma and terror when it comes to emotional need – and especially, panic about loss.

What’s clear is this: Alma needs Reynolds and Reynolds needs her. Yet, as in any relationship, healthy or not, they must work out a way to be together. For Alma and Reynolds in The Phantom Thread – we have a marriage of two people dominating each other (at least they think they are). Yet, what is it they’re really dominating? Both Reynolds and Alma are trying to come out on top of their own fears.