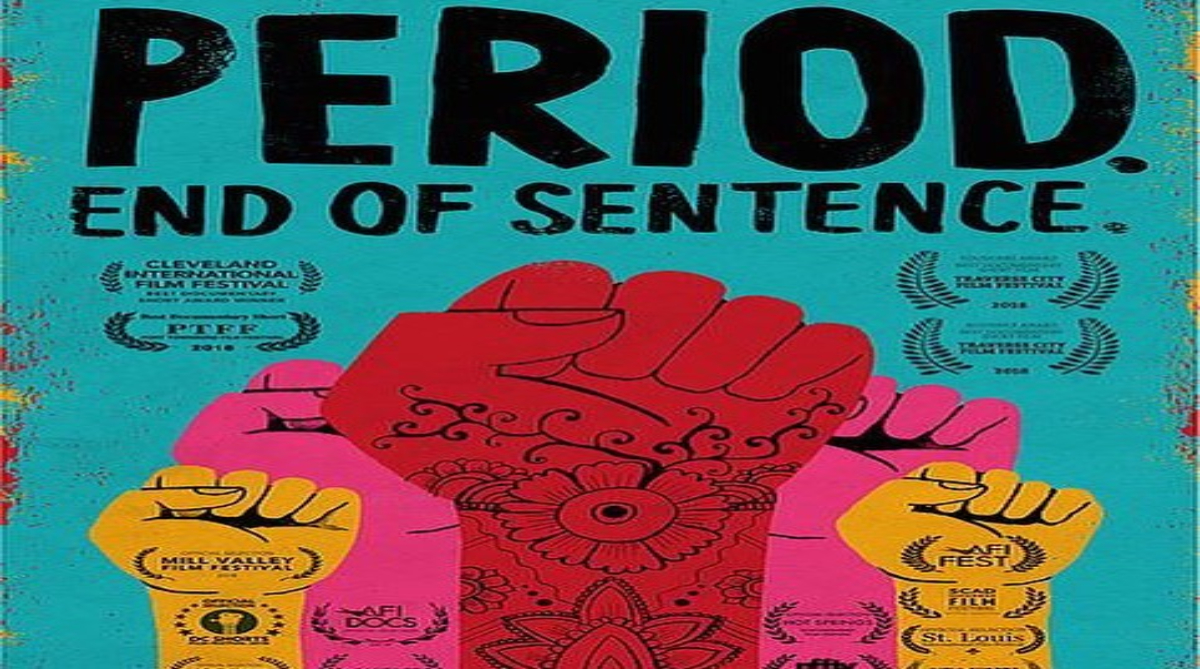 A sentence to shame is worse than having no sanitary pads month after month. Period. End Of Sentence. This film, 2019 Oscar Winner for Best Short Documentary, shows us very clearly that you can’t do much as a girl in rural India if you’re bleeding. But, not only that. When old superstitions and taboos about menstruation prevail, and you’re seen as dirty or cursed; stigmatized and ostracized; it interferes with everything. Especially with hope; school; and being able to “rise and fly.” Believe it or not, this is the state of affairs in parts of India in the 21st Century.

The Pad Project started by a group of teenage girls at Oakwood School (and their very successful Kickstarter campaign!) changed all that. Along with their teacher Melissa Berton and one forward thinking Indian man with his pad-making machine.For these Oakwood girls, being a part of Girls Learn International (GLI), an organization promoting universal education for all women, was as much a learning experience for them as it was for the girls they helped:

“We thought that the major issue was that the girls were not going to school because of their periods,” says Ruby Schiff ’17. “In reality, the major issue is a lack of education and the stigma around menstruation …” Being close to the same age as the girls at their sister school in Hapur, India, it was sobering to realize that enduring this cultural stigma from the onset of puberty brings about negative self-perception at an age when their self-esteem is particularly vulnerable.

No one should grow up living with shame.  Period. End Of Sentence is a moving reminder.

The film begins with director, Rayka Zehtabchi interviewing two girls in Hapur about “periods.”  These girls, pubescent and shy, shrink away, heads down, unable to even say the word: “Period.” “Ask her first,” one of them says. Rayka encourages them to step out of their shame; and gives permission, for the first time, to say this “taboo” word.  As a larger group of young girls join in, laughing and giggling, there is a chorus of “Period(s).” Saying this simple word loaded with superstition and shame; begins to free them.

Misinformation and taboo breed shame. Here are girls who have only old clothes to “take care of the blood;” and they have to stop school because changing their rags interrupts their studies. Their sentence? Not to be educated.

Living in a culture that has no information about menstruation; the facts are obscured by superstition. When asked: “Do you know why you bleed?” Women young and older shake their heads: “Only God knows. Baby’s are born because of it.” Or young men respond to the question: “Any of you know what menstruation is?” “An illness? It mostly affects girls, right?” And, a very awkward girl in a classroom setting; eyes shifting back and forth, says: “It’s a girl problem.”

An illness. A problem. Education is more than school learning. And, a part of education, the part Rayka and GLI and The Pad Project offer these girls and women is: permission. Permission to know;  to speak; granted by someone who doesn’t feel shame about a word; a word that is thought to mean something dirty or sick; but is really about something normal.

And we see something normal; unusual for Hapur, in a young girl named Sneha. She is an inspiration – because all girls need to “rise and fly.”

Period. End of Sentence. follows Sneha. She’s an outlier in how she thinks; has ideas and opinions she can’t share; but is given permission to speak them out loud in the making of this film. Sneha refuses to be defined by men; marriage; or her culture. She wants to join the police academy in Delhi. She’s determined to “rise and fly.”

Not an easy thing to do in a well-established patriarchy; laden with myths. But, Shneha is a free-thinker. She believes she should be allowed to enter a temple when menstruating. Even though living with elders who believe that during “that time” prayers are never heard, Sneha has prayers and dreams. But, before The Pad Project; she isn’t quite sure how to find her way out. She knows what she wants: “there’s a girl in the Delhi police force. Everyone knows her. Now her father is known because of her. Before she was known for her father … Nobody has a better life than she has.”

Sneha doesn’t want marriage; a husband; or to be boxed in by the traditional life of her village. A better life is her life. Defining herself. That’s what self-esteem is all about.

And she gets it. With the help of The Pad Project,Arunachalam Muruganantham brings his napkin-making machine into her village. He teaches Sneha and a group of girls how to make the pads. They start a business; completely powered by girl-power; by women making pads for women. They name their pads, “Fly;” because they want all the women who use their pads to “rise and fly.”

Yes, women must rise and fly. But, how do you “rise and fly” (which really means feel better about who you are as a woman) – if you’re sentenced to shame? Well, with The Pad Project; the Oakwood team; Rayka Zehtabchi’s film Period. End Of Sentence; Arunachalam Muruganantham – the women and girls of Hapur soared right out of shame.

They earned 180 rupees on their 1st day going door to door; introducing girls and women to the Fly pad; not expecting to sell the pads at all. Isn’t that power? Success And, hope?! Yes, these things make you feel good about yourself. And, then, anything is possible for girls like Sneha, right?

It’s not crazy to hope; or to think big; even though Sneha thought it was: “If you tell someone about us, it sounds like a crazy dream.” But, dreams do come true sometimes.  It just takes determination, hard work, support – and help.

Help is a good thing; and the girls at Oakwood helped and respected the girls in Hapu. And, Muruganantham’s machine gave them an opportunity to change their self-esteem: “The machine creates a micro economy in the village,” Mason, an Oakwood freshman, explains. “It gives women an opportunity to work. When they feel like they can make their own money, it empowers them. I think that that’s what the pad machine really brought the women. It gave them a chance to understand their worth beyond the men in their lives.”

It took people who believed in the power of women. Period. End Of Sentence did. The girls at Oakwood did. And, Arunachalam Muruganantham, the man who invented the machine, saw women differently than most men in his patriarchal country: “Daughter never talks to mother; wife never talks to husband; friends they don’t talk to each other. Menstruation is the biggest taboo in my country. I am the man who invented the low-cost napkin-making machine. Our mission is creating India into a 100% napkin-using country.”

And, then, there is Sneha. She’s strong; and determined to live her dream: “I imagine myself on the  police force. Then, I’ll thrash anyone who tries to mess with me! … I’ll have a lot of money. I’ll fulfill my parent’s dreams with it; and I’ll fulfill my own.”

The Pad Project and the pad-machine are paying for Sneha’s training to become a member of the Delhi police force; with the wages earned from her new business, the Fly pads. Letting her; and other women in her country truly “Rise and Fly.”

And what does Muruganantham say about who is “the strongest creature created by God? Not the lion, not the elephant, not the tiger. The girl.” Isn’t this the ultimate dedication? You have to be a little bit feminist to think this way, right? Giving women the power and permission to soar out of shame and dream big. Not to mention … the faith they need to make those dreams come true.