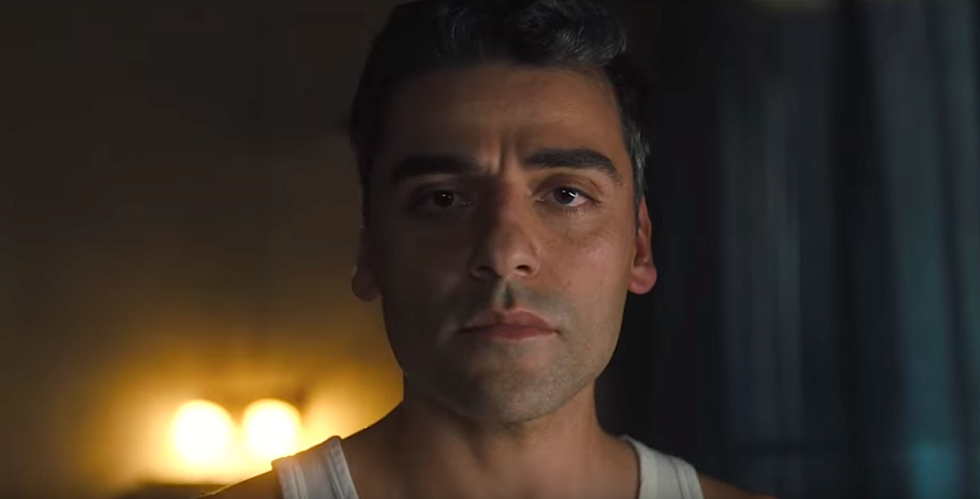 Peter Zvi Malkin’s Holocaust trauma worked in his favor to capture Adolf Eichmann, Hitler’s Chief Executioner; Head of the SS Office of Jewish Affairs and the Architect of the Final Solution. At least that’s the Hollywood version of the story. It makes sense as PTSD goes. And, although Chris Weitz’ Operation Finale invented the dialogue between Malkin and Eichmann for dramatic purposes, it wouldn’t be too far fetched to believe that some of it might have been going on either in Malkin’s mind or in his unconscious. After all, wouldn’t it make sense that the personal nightmare and rage he had to live with might help him outwit the man responsible for his losses?

Peter Malkin (Oscar Isaac), an Israeli Mossad secret service operative, lost his older sister, Fruma, in the Holocaust. She was tortured and killed. He described her as his sister, teacher, and friend. The loss was brutal and tragic. Her three beautiful children were murdered along with her.

Malkin and his parents left Poland for Israel before Hitler and the Nazi’s took power. Fruma, not knowing she was in terrible danger, stayed behind.

Throughout Operation Finale, Malkin is tormented with waking nightmares of Fruma’s death. These nightmarish images are strongly stirred when he is tasked with capturing and then facing down Eichmann (Ben Kingsley), the man responsible for the plan that resulted in Fruma’s death.

Although he wasn’t there to see it happen, Malkin’s terrifying flashbacks put him in the woods in Poland, lying in hiding, watching and helpless to stop the horror. He sees Fruma sitting, playing unawares with her children; then strung up on a noose by Nazi’s and brutally killed.

Malkin’s flashbacks are typical symptoms of PTSD and trauma. The loss of Fruma has interrupted his life. He had no power then. Now he has a chance to mastermind a different plan – one that will bring Eichmann to justice.

How do you hunt down a man that hates you? One who arouses hate and disgust in you? Malkin had to create a barrier to do what he had to do. He wouldn’t touch Eichmann. He had to wear gloves. But, at least there was a chance to take back his power.

Until 1958, Eichmann had been presumed dead after eluding capture at the end of WWII. Mossad, Israel’s national intelligence agency, was given a tip by Lothar Hermann (Peter Strauss), a Holocaust survivor living in Argentina.

While dining with Silvia at a restaurant, she introduced Hermann to Klaus, who was sitting with his own father at another table. When Klaus returned to take his seat, the almost-blind Hermann (blinded by beatings at Dachau) recognized Eichmann’s voice. It could be no other.

Raised Catholic because the Hermann’s were in hiding from further persecution after the War, Silvia thought Klaus was just another good Catholic boy. But, in one chilling scene she realizes this is far from true.

As his girlfriend, Klaus convinces Silvia to attend a meeting that is very important to him. That meeting turns out to be a Nazi rally, not dissimilar to the White Supremacist neo-Nazi rallies taking place in the U.S. today. The participants at the meeting, with great fervor and obvious hatred of Jews, call for their continued extermination.

When Silvia realizes Klaus’ complicity with the group, she runs out, terrified, angering him. On the pretext of bringing an “apology” gift to his home, she becomes part of the plan to confirm Ricardo Klement’s true identity.

Once it is clear that Ricardo Klement is, in fact, Adolf Eichmann masquerading as a Mercedes Benz factory worker – the plan is made for his capture in 1960.

Yet, the real story is this: it takes Malkin’s determination to get justice for his sister’s horrific death to succeed in getting Eichmann to sign the paper necessary to be taken from Argentina to Israel. That is far from easy.

Is There A Human Inside Eichmann?

Intimidation worked for Malkin and his cohorts to get through Eichmann’s denial that he was anyone but Ricardo Klement. And, after many days, he finally proclaimed: “I am Adolf Eichmann.”

But, intimidation did not work to convince him to sign consent to board a plane for Israel. Malkin had to find another way to break him down.

He had to look for something human living inside Eichmann, some feeling, or at least a vulnerability that might make him crack.

Eichmann was quite capable of standing, tall, rigid and still, wearing his blank unfeeling mask. In newsreel footage, we see him look coldly upon a crowd of Jews, standing in a trench and staring up at him with pleading eyes, waiting for his command of slaughter.

A young mother holds her baby out to him, begging Eichmann to save him. With not the slightest change in his icy expression, he gives a quick turn of his raised hand in command to his soldiers to take her out.

The baby dies first, as the bullet pierces his skull before going into her. Yet, Eichmann is a family man, with children. Whether true or not, Operation Finale shows him asking Malkin anxiously if his own family is safe.

It may be the film’s fiction that Eichmann was worried about his family and revealed that to his Captors. But the film’s intention certainly shows this man’s hypocrisy; his lack of empathy, his belief that others unlike him are less than human and don’t deserve to live on German soil.

This is how he justifies that Jews and their loved ones must be exterminated, while preserving his own.

In the fictionalized part of the film, Peter Malkin tries to undo Eichmann and Eichmann tries to derail him. It’s a cat and mouse game. Malkin uses Eichmann’s family’s safety. Eichmann preys on Malkin’s trauma; one he himself caused Malkin to suffer.

Eichmann asks about his family: “Are they safe? I don’t think I could survive if anything happened to them.” Yet, he’s a man who cannot allow vulnerability and he quickly turns the tables: “Did you lose someone, Herr Captor? Whom did you lose, Peter, I’m asking about you?”

Malkin, knowing he must give Eichmann something human to carry out his plan to get him to sign, “befriends him,” sharing wine and giving him a smoke. He replies: “My sister, Fruma. She would have died protecting the little ones. Her boy is dead and yours is alive.”

This is, of course, a pointed jab. He’s angry, but doing his best to contain it; trying to see if he can push Eichmann to show any guilt or remorse. That’s unlikely, given everything we see and know about Eichmann’s capacities for hate and murder.

When Eichmann says: “I’m sorry Peter; I’m truly sorry,” this has to be Eichmann’s own cruel ploy. Eichmann never admitted guilt. And it is only guilt that paves the way for someone to be “truly sorry.”

Eichmann has been playing Peter the whole time, trying to outwit him and make him crack. He makes Peter swear “on Fruma” that he will be allowed to see his wife once again. Otherwise, he will not agree to sign the paper releasing the Mossad agents to take him from Argentina on a plane to Israel to willingly stand trial for his crimes.

Eichmann, who stood without feeling and directed his soldiers, to shoot down millions of men, women, and children knows this is a game. After he signs, he tortures Peter about Fruma’s death: “Why no children Peter? I think you’re afraid the future will repeat the past. You can’t think that way, Peter.”

Now he’s Peter’s advisor? This man who caused devastating trauma knows nothing about what it takes to go on. Certainly not convincing yourself “not to think that way;” or that the past will not be repeated.

In fact, with PTSD, the past is repeated in traumatic memories every single day.

To try “not think about it” is what a traumatized person is forced to do, as the trauma comes back in the kind of frightening flashbacks Peter Malkin has in the film.

Yet, trauma doesn’t go away. It needs to be understood. To be spoken about. A traumatized person needs a way not to feel helpless any longer.

So, what helped Malkin?

He took some power back in outwitting Eichmann, making him no longer the one in power, both in history and in Malkin’s mind.

To know that Eichmann would pay for his crimes; that he would not freely live the life he’d robbed so many of is part of what released Malkin to go on.

We see this in the #Me Too movement. At the very least, trauma victims (like Christine Blasey Ford) must be given a voice. And that voice must be heard.

At Eichmann’s trial, the voices of many Holocaust survivors, testifying against Eichmann, were broadcast to the world. This is the first time many knew just what atrocities had been committed. Newsreel photos of the camps and the starved and the tortured and the dead were shown.

My great-uncle, Leo Hurwitz, directed the television coverage, produced by Capitol Cities, as Eichmann sat listening to the survivors, face hard and blank, showing no feeling for the lifelong horrors he inflicted.

Yet, thanks to Malkin’s determination to settle the score for his own family’s trauma and for his sister’s death, Eichmann was found guilty.

He died by hanging on June 1, 1962. And, Malkin could tell his mother on her deathbed just what he had done. She died more peacefully because of it. And, Peter Malkin could go on with his life.