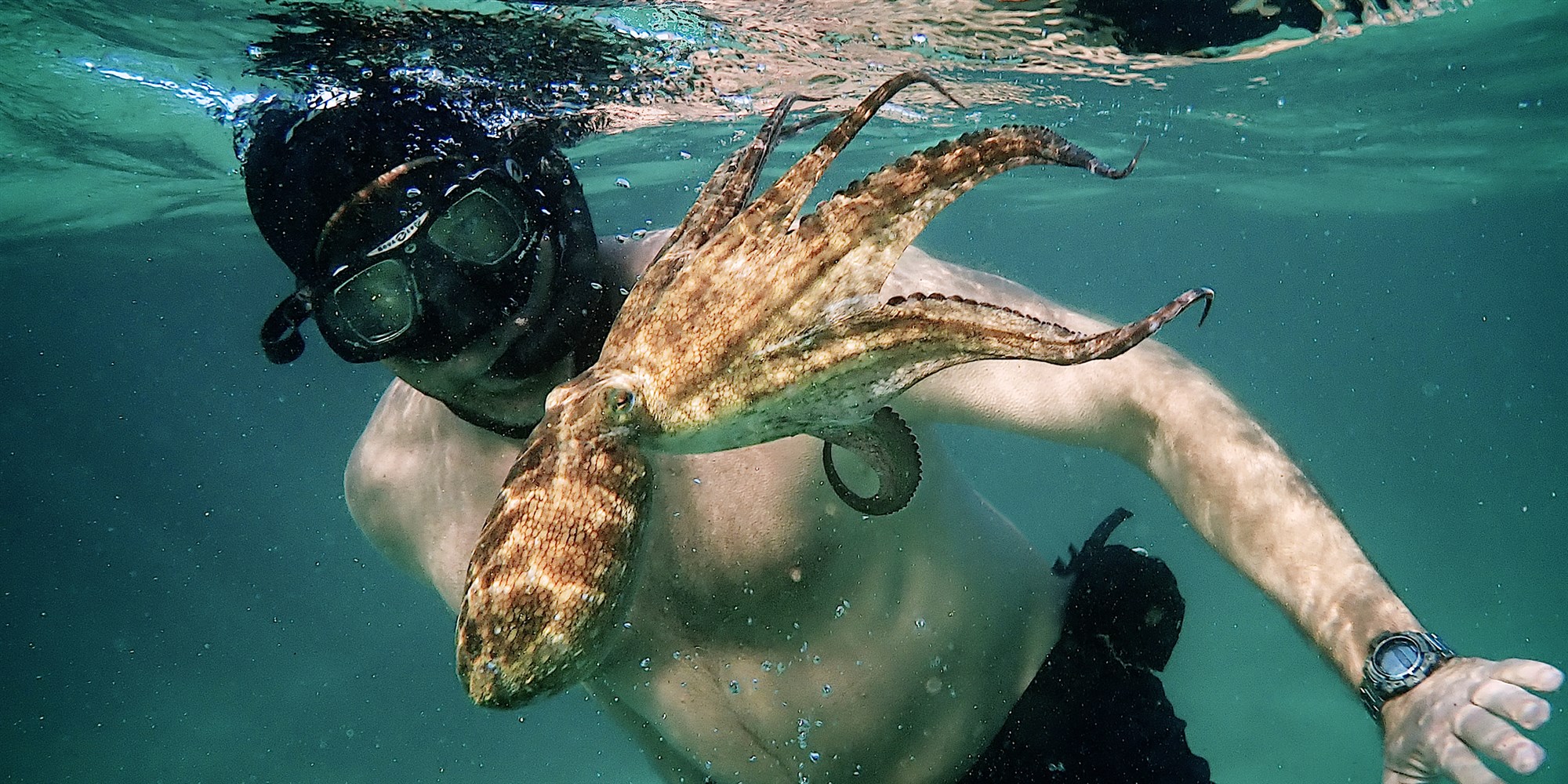 Why return to the same place over and over? It’s healing. How? Craig Foster says it best in his moving, life-altering, love-story, My Octopus Teacher: “That’s when you see the subtle differences. That’s when you get to know the wild.” It’s true, too, of going through a wildly tumultuous emotional time, not so different than the Cape of Storms where My Octopus Teacher takes place. The more you go deep inside, over and over, to look at the tangled underwater terrain of your feelings, the more you see the nuances that can set you free. This is what psychoanalysis does. This is the work of healing.

When You Get Separated From, Who You Are

The demands of life can get in the way, take their toll on your peace of mind; on staying connected to who you are, what you love, and the human relationships that matter.

Sure, hard work is good for the soul, especially if it’s work you love. Yet, if you get too wrapped up and make it your whole world, you can easily lose sight of your inner needs.

That’s what happened to Craig Foster, documentary filmmaker, editor, and cameraman over years of demanding work. He loved it but was left depleted, exhausted, detached. He hadn’t slept properly in months, he’d worn himself out, and his family was suffering.

In fact, Craig was getting sick. His mind couldn’t deal with all the pressure and he didn’t want to see a camera or edit room ever again. He’d just gone through 2 years of “absolute hell. My great purpose in life was in pieces.” How did Craig find a way out of his grief?

He went back to his childhood roots by the sea, diving, and snorkeling, and was inspired by the amazing trackers he’d witnessed shooting a film in the Central Kalahari Desert.

How to Track and Find What You’ve Lost & Grieve For

Sometimes it’s you that you’ve lost. That happens, when life takes you away from what you actually feel and where your priorities and emotional needs exist. You need to re-connect, even find ways of seeing, reasons to be alive, that you’ve never exactly known.

This means learning how to search for and find what’s been pushed away and hidden inside you. That’s the kind of thing Craig watched the greatest trackers in the world, do.

They “could go into the incredible subtle signs in nature, things my eye couldn’t even see, and follow them for hours; find hidden animals in the landscape, I could feel I was outside … I had a deep longing to be inside that world.” Now, 18 years later, he would.

At home on the Cape of Storms, Craig began diving again, “getting in the water of one of the wildest scariest places to swim on the planet.” That’s what going inside your stirred-up feelings can seem like sometimes, and that’s why it’s useful to have a guide.

But Craig went on this journey alone. At first at least. And also knowing it was best to have no barriers (no wetsuit) to what he might encounter in the world to be explored. Being openly receptive is an important part of healing.  Yet, then, he found a teacher.

My Octopus Teacher: Waiting, In the Under-Water Planet

Picking up the camera he loved, Craig swam slowly in the kelp forest. It was foggy and difficult to see. But, finally, he arrived in an area where his vision was clear. Then, Craig saw her. A strange spectacle at first, having made herself look like a shell-laden rock. An octopus, scared, now wrapping herself in a piece of algae, staring at him.

This was his first lesson. You can’t get to know anyone, especially anything about yourself unless you go to the same place over and over inside; and keep looking closely.

So, Craig watched for all the little signs, of what was hidden away in this new world, the one she inhabited; the ways she’d learned to live. She was a lone soul, as Octopi are. Craig too was alone in this need to know himself again, and newly re-make his life.

Much of this healing journey is about trust. Learning to trust yourself; and not be afraid of what you need to see. Just as the little Octopus learned to see that Craig was a friend; not an enemy.

Learning to Trust Yourself, Another & Your Longings To be Close

The interesting things about this little creature were many. But, two stand out and are lessons to be learned. Curiosity and openness are vital. As is learning to trust another.

This, the little Octopus was determined to do. She was scared but immediately curious. Feeling safe, she reached out an arm and explored Craig’s camera with all her tentacles.

Day after day, he came to watch her, waiting until she wanted to get closer to him. Soon, she came out of her den and just went about her usual activities. Things would still scare her. Dropping a piece of his camera, she left her den, and he couldn’t find her for days.

This made Craig sensitized to become a tracker. He had to think like an octopus. Find clues, quietly swim through the waters, not to scare her. And “Bam, she’s there:” “Oh, it’s you, you can come into my world.” He wasn’t a predator. But there were many.

Craig witnessed his Octopus Teacher’s incredible creativity to deceive. She had to. Predators, sharks, were everywhere, and she learned various ways to protect herself.

An octopus is an alone creature. Craig too, diving alone, had to have everything about his diving kit perfect. Just like his little octopus, he didn’t know what might be lurking.

But they both craved and needed contact, interesting in an octopus who is used to living alone. He wondered: “What could she get out of this human – visiting her?”

She seemed to want something, approaching him more each time. Covering his hand with her body; riding with him to the surface when he needed a breath; lunging onto his chest.

She let him hold her. Did she too, need to feel there’s something safe in the midst of what is not? Maybe. In her and in Craig, we see the need for connection. A human thing.

Craig fell in love with her – I think because she reflected him what he had to face in himself. Her vulnerability and his own; her needs to feel safe mirroring his. The need to retreat and to heal, as he was doing, and she too, after a shark attack, to re-grow her arm.

Regrowing an arm, or healing from grief and exhaustion are not so different. Craig had to feel the little Octopus’s courage to reach out for the connections he needed to heal.

There are internal predators, those that take you away from people you love; or that convince you to give up on your feelings or needs. Those have to be watched out for.  You have to know and be able to detect who and what is safe. And who is not?

My Octopus Teacher was teaching Craig to be “sensitized to the Other.” This he knew Tom, his son, needed from him: his love and protection. But first, Craig himself needed to feel safe. Like the little Octopus, always on the look-out, for ways to protect herself, climbing on the back of a shark attacker, finding the most secure place to hide, and to escape.

In order to heal, it’s important to feel safe being open. This Craig learned in time. He took his son to see and meet his Octopus Teacher. Now his journey didn’t have to be alone.

Just as Craig Foster went into that understudied wild kelp forest, he went into an understudied place inside himself – with a great deal of help from My Octopus Teacher.

Why Healing Means Returning to The Same Place Over & Over

Craig went there over and over, that same place. Because that’s the only way to see more closely, to let what you see develop and expand, to truly begin to know yourself. And, as Craig says, “To connect the lines and the stories.” Mostly the diverse parts of him.

And what he saw, each time he returned, was himself reflected in the little Octopus. How much she could give of herself; how much he needed to take first, in order to give. He watched her time her death for the birth of her many, many (100’s of 1000’s) babies.

He watched her mate. And then give over her body and her life for her eggs, for the bringing of her young into the world. This meant the end of her life. Not the same for Craig, but he did learn to go into Tom’s world and bring Tom into his own once again.

And Craig sadly watched the little Octopus die. He missed her. But My Octopus Teacher had given Craig back his life – reconnected him to his capacity to feel and to love.

From going back to the same place over and over, Craig healed the wounds of his past. Just as the little Octopus helped Craig to do, he watched Tom – as they dived together – develop a strong sense of confidence, and a gentleness, that Craig now had.

My Octopus Teacher taught Craig that he was a part of this wild, remote place where she lived. But, also, that his previously remote feelings and needs for contact, were now a part of him. Going back to the same place over and over heals you. Because now you can feel and are whole.