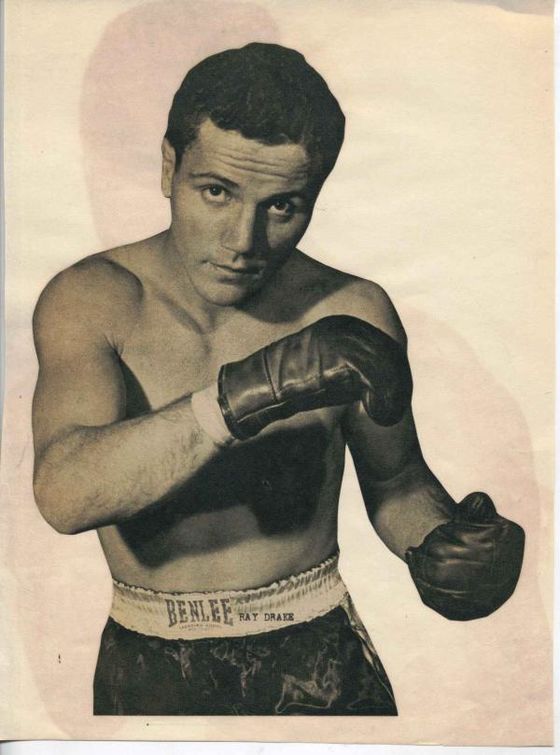 20 Nov LEO HURWITZ
THE YOUNG FIGHTER: A REALITY FILM 1953
Who Does Ray Drake Belong To?

The Young Fighter begins with a tough Brooklyn narrator’s voice. Tough as the boxing world is tough, tough as Ray Drake’s manager and trainer are tough; tough as the decision Ray Drake had to make. Would he become the Champ his manager and trainer were bent on making, or the family man he also wanted to be? And, why did it have to be an either/or choice? In the fighting world, with the necessity of financial backing for the slightest chance at success, who owns Ray Drake – him or THEM?

These questions are the centerpiece of Leo Hurwitz’s The Young Fighter, shown not only in Leo’s always-truthful ability to see what might otherwise be hidden, but also supported by the then-new ‘cinéma vérité’ style. Here we have Ray Drake, the young fighter, in real life. Ray Drake with a problem.

Our narrator introduces us to Ray: “Maybe you’ve read about Ray Drake in the fight pages and if you look close, see him on television … anyway, here he is”:

A boy in a hooodie appears on the screen doing an almost choreographed dance – prancing; practicing his punches as boxers do. He’s a young-faced kid, with a light colored hoodie tied close around his face. Then, we see Ray in the training gym. Our narrator continues: “Here he is, middleweight, age 23, 5’10”, chest 39”, biceps 13 ½”. Record: 7 fights and 7 wins.” Now, Ray Drake is robed and in the ring; getting his foot-moves down; warming up for his next fight.

Ray’s life didn’t start easily. It isn’t easy now: “Ray was born in New York City. First home, a foster family; regular job, dispatching for Long Island Light and Power company; Ambitions: 1. To be a fighter; 2. To be a family man … but, right now, because of his training, a family man with a problem – 300 miles away from his wife and kid and missing them like crazy…”

Tom Hurwitz, Leo’s son, and also a well-known documentary filmmaker, said this about The Young Fighter at a 2017 Cinema du Reel conference:

“If I were to choose one of my father’s films as an ‘invisible film,’ I would choose “The Young Fighter,” 1953. Although it was seen on television in the U.S. in 1953 as part of the Omnibus program, it is hardly ever acknowledged as the seminal work that it was. It was the first film to use portable sync sound equipment to film real life, documentary dialogue scenes. As such, it was the first ‘cinéma vérité’ film, and a very good short film at that. Several years later, it was influential in persuading the Robert Drew Unit at Time-Life Films that uniquely powerful films could be made with that technique, and to fund the engineering work of Leacock and Pennebaker in creating the first light-weight, “silent” sync-sound cameras. It took years for directors and editors to learn to edit ‘direct cinema’ material with the skill and continuity that Leo attained in ‘The Young Fighter.’”

We witness the power of Leo’s editing in the candidly sensitive way The Young Fighter tells Ray Drake’s story.

Ray wants to be a fighter, but he also loves his wife. Right now, he’s separated from her and from his baby – per instructions from both his manager and his trainer: “For three months, no interference with training. For three months, no Helen, no Petey.” Ray’s manager works as a furrier. He was once a boxer himself, but he didn’t make the cut. Now, he has a different idea. His ambition: to create a Champ.

We see Ray’s wife, Helen, on film, far away. Petey, their baby, is playing with her locket. Inside are small photos of Petey on one side and Helen and Ray on the other: “Baby … see Dada,” Helen says. Helen looks very sad.

Ray’s face is sad too. This separation isn’t what he wants. But he must agree if he has the least chance at being a Champ. Yet, the hard reality is this: Ray is merely a commodity. His manager has a goal; and Ray is a way to get there. Replace Ray with any talented young boxer. In this scheme of things, Ray’s feelings and emotional needs don’t matter. To Ray, who ended up as a foster kid, this is an all too familiar scenario.

Combine that with his manager (Alex) and trainer’s (Lefty) demeaning tactics at Williamsburg Gym, perhaps also too familiar to Ray. We see Ray in training. Trainer and manager give him a lecture about the “right” attitude for boxing success. Here it is: “… the belief he can be a Champ; the belief he can win; that the next one is always the one that counts.”

Winning, they tell him, is about a singular focus on the other fighter. This singular focus is what they want out of Ray. But, as our narrator tells us: “Ray’s got an apartment now and another fight on his hands … one thing’s for sure. He’s going to have to get by Alex and Lefty before he can send for his family.”

It’s not easy to get by those two. They know how to strong-arm Ray. One way is to shake up his self-confidence. They tell him everything he’s doing wrong and nothing he’s doing right: “In boxing, a winning fight isn’t any good. You can’t get cocky. You have to go right back into training and learn from your mistakes.” They list every one of those mistakes; particularly that Ray’s last winning fight wasn’t good enough.

Any kid with a difficult past is vulnerable to feeling not good enough. It comes with the territory, especially when there’s been early rejection or abandonment. Ray’s a foster kid. He works hard to fight these worries, trying his best to get the approval he needs and craves. Yet, he’s also an easy target for exploitation by seductive promises. And, Alex and Lefty’s criticism links up with his fears of failure and most probably, more rejection.

Understandably, Ray’s fears make it difficult to stand up for what he wants. He can’t easily fight Alex and Lefty’s interferences with having Helen in Brooklyn in the new apartment he just rented: “Bringing Helen down with the baby, it’s well and good. You’d all be together. It’s a wonderful thing. But … it also gives you a big obligation.”

They are intrusive enough to question the ‘sleeping arrangements’, trying to convince Ray that twin beds are better than a double: “Once [Petey’s crying or being close to Helen] disturbs your sleep, you aren’t the same. You can’t train the next day. It’s better for you that you don’t abuse yourself.”

Who is it really better for? Alex knows what he wants, a Champion, and there is only one way to get it – manipulating Ray to believe he must put his personal needs for love and family aside. Ray has supportive foster parents now – but he learned early that needing anything from anyone is not easy to come by.

We watch Ray in conflict. He doesn’t want to fail himself, his managers, or his family. If he loses Alex and Lefty, all he has left is his day job. But if he listens to them, he can’t be close to Helen and Petey – and he needs them too.

Alex is a master at manipulation. He plays upon Ray’s hope: “I’ll tell you this much, Billy Graham (and others), they’re all married men and they made the grade and they have nothing on the ball you haven’t got, so no reason you can’t too…”

Ray can’t help but take Alex’s verbal reassurance as a green light: “That’s how I feel too!” With a big smile on his face, Ray makes a person-to-person call to “Mrs. Helen Drake.” Excitedly, he tells her that he has news – they now have a four-room apartment right next to the gym: “Ready to come down?” he asks.

But, Alex’s encouragement is a trick. He and Lefty whisper to each other that Ray will “realize his priorities.” In the kitchen, hearing Ray on the phone, they talk in hushed tones: “He loves fighting, but I want to tell you something. If he’s not in condition, we’ll retire him. When the wife comes down … we’ll pay him a visit.”

Helen and Petey arrive. The camera follows Ray and Helen nesting in their unfurnished apartment, eating dinner on the floor, playing with the smiling Petey, a happy young family beginning a new life. Helen sings in a beautiful voice: “I can’t complain …” as she cleans the stove and Ray washes the windows in their new home. Hovering in the background, though, is the threat that Alex and Lefty will take away his freedom – or give up on him.

The film takes us back to Williamsburg Gym: “Training ground for every fighter. Kids without a chance and kids who can’t be stopped.” Which one is Ray? He’s: “a young fighter in the tricky first stage with not only a regular job, but now a wife and a kid and a new apartment to fix up.” He’s now Lefty’s problem. We hear Lefty, aggressive and angry, cutting into Ray as he trains him on this happy moving day: “You’re not in shape. I don’t like the way you move your feet…”

Our narrator’s voice gives us the real scoop: “Lefty never mentioned the apartment or asked about Helen. But, for his money, nothing Ray did at the gym that day was right. What was on Lefty’s mind had to come out, so a dinner was set up that night at the home of Ray’s foster parent’s … with an extra special invitation to Helen.”

Helen pours coffee after dinner. Lefty finds just the right moment to approach: “Is it Ok with you that Ray’s a boxer?” Helen, a strong and supportive wife, with a mind of her own, answers him: “Anything. I’m a nurse. I wanted to be a nurse since I was a little kid, two years old. You have something in your blood like that … he could find something else he could make more money at, but he wouldn’t be happy.”

Lefty goes in for the kill: “Helen, it’s very important for the wife of a fighter to be on his side. If she loves him unselfishly and does everything to help him, he’s helping her.” He proceeds to lecture Helen on the responsibilities of a fighter’s wife; tells her how, without her cooperation: “I can’t get him in shape. I can’t do with him what I want to do.” Helen begins to squirm. We see a troubling realization take residence on her face.

Lefty and Alex own her husband. Having a Champ is much more important than anything or anyone else. This awareness locks into place when Alex makes his pitch: “If we punch as a group, we can be successful. We three are going to have a Champ.” Helen looks helplessly into the distance. She knows what she doesn’t want to know: she and Ray don’t belong to each other or to themselves.

The Young Fighter ends with our tough narrator’s voice asking this question: “Ray Drake Fighter versus Ray Drake Family Man. How’s it going to come out?”

I wondered how it came out. I researched Ray Drake, fighter, online. I found almost nothing. He fought for a few years, but then seemed to disappear from the boxing world. He clearly didn’t become a Champ.

What happened to Ray Drake? Did Lefty and Alex “retire him” because he failed to satisfy their goals? Or did Ray decide that being a family man was his real ticket to a happy life? We’ll never know.