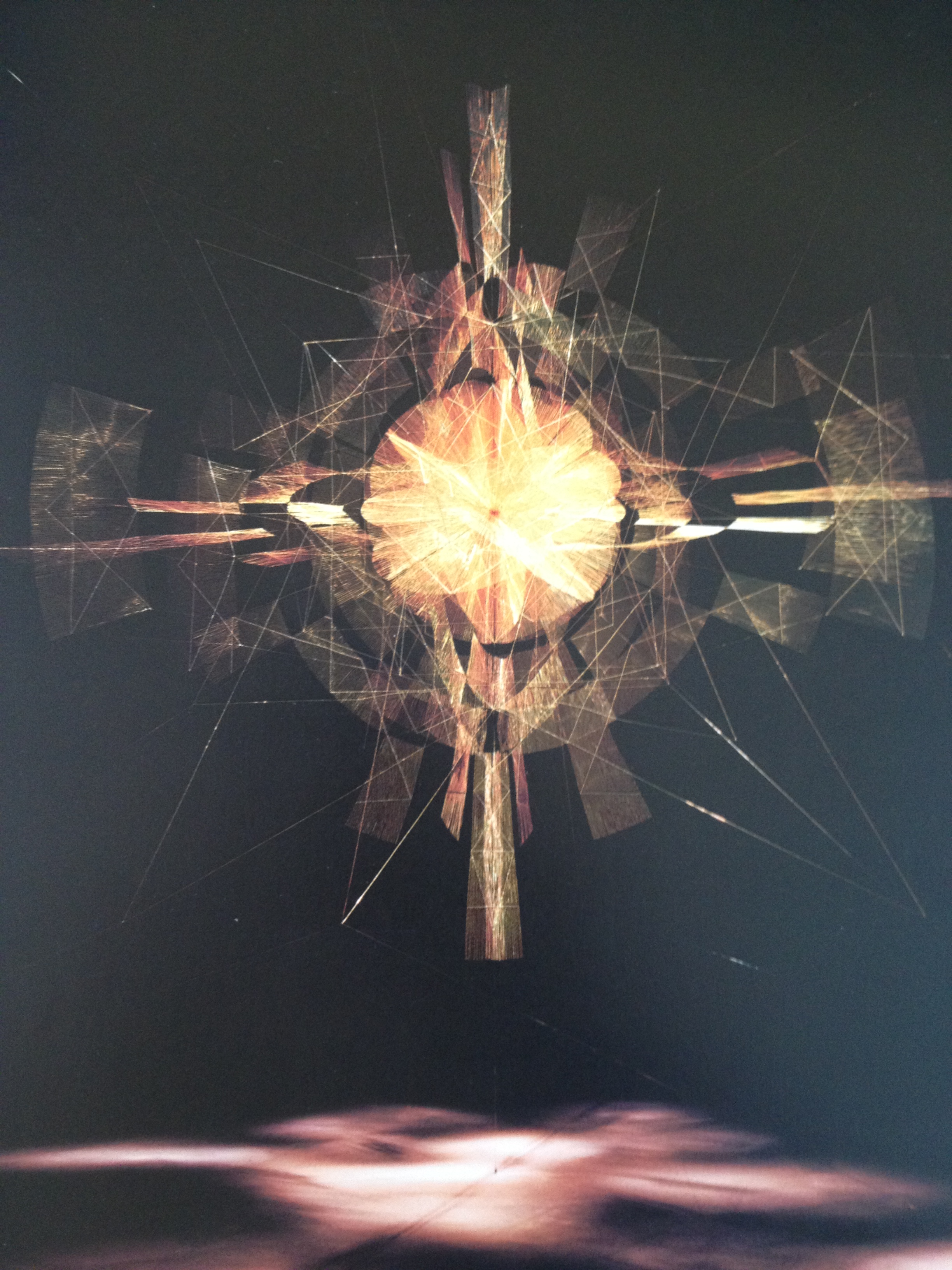 18 Dec LEO HURWITZ
THE SUN AND RICHARD LIPPOLD 1966
The Sun: Unifier and Transformer

The Sun and Richard Lippold begins with Leo Hurwitz’s voice, reminiscing. “In the studio of Richard Lippold, where being a musician as well as a sculptor, he played Bach and Pachelbel for me, and where we talked for many hours, an idea came to me which is now this film.”

This film, of course, is The Sun and Richard Lippold; a short film about the Sun, inspired by Richard Lippold, the artist, and his Sun. Lippold’s Sun began as a permanent installation in the Oriental Room at The Metropolitan Museum of Art in New York City, then moved to a larger room where the film was shot, and unfortunately taken down altogether many years ago.

As The Sun and Richard Lippold begins, we see Lippold’s Sun, a large metal sculpture, gold and glittering, turning as a mobile turns. Then, moving back and forth, to and from Lippold’s Sun, the film centers on the Sun itself in its many facets and iterations throughout history and in our everyday lives.

The Sun and Richard Lippold was produced, written, and directed by Leo Hurwitz, with cameraman Manfred Kirchheimer. Organ music makes up the film’s musical score. Lippold, himself, was a trained organist, and Lippold, E. Power Biggs, and Daniel Pinkham play the organ music for the film.

With the organ playing in the background, Leo tells us about his inspirational conversations with Richard Lippold: “Lippold talked about how the mind of an artist is a museum of memory, how it holds a lifetime of submerged facts, thoughts, and feelings, how the hand of the artist transforms these bits of experience into a given work.”

Richard Lippold (1915-2002) was an American sculptor, known for his geometric constructions using wire as a medium. He was born in Milwaukee, Wisconsin, the son of a mechanical engineer, studied industrial design at the Art Institute of Chicago and had his own practice for two years after graduating in 1937. He also studied piano and organ and composed music in his spare time.

According to Curtis L. Carter who, as director of the Haggerty Museum of Art at Marquette University in Lippold’s native Milwaukee, curated a 1990 retrospective of the sculptor’s work: “He saw his works as an affirmation of life. He thought that light and space were the vocabulary of the 20th century artist. His work has a sense of openness, and implies a kind of upward, celebratory movement.”

John Cage, a friend of Lippold’s, saw in Lippold’s seemingly “empty” sculptures the same endless possibilities of form he saw in his “silent” 4’33”: “While looking at the constructions in wire . . . it is inevitable that one will see other things, and people too, if they happen to be there at the same time, through the network of wires.”

The Sun was commissioned by New York’s Metropolitan Museum of Art in 1953. Lippold used nearly two miles of wire filled with 22-carat gold, held together by 14,000 hand-welded joints. It took three years to create and caused a sensation. Not all authorities were impressed, but this didn’t bother Lippold:

“He always said he wasn’t interested in being well-known; what he wanted was to have his work experienced,” Curtis L. Carter said, “he’s the most unknown great artist around.” Through Leo Hurwitz’s eyes and Manfred Kirchheimer’s camera, we can now experience Richard Lippold and his Sun – and all that the Sun has to offer.

Leo Hurwitz and Lippold’s Sun at the MET

We enter into The Sun and Richard Lippold as Lippold continues to play the organ in the background. Leo Hurwitz’s voice tells us more about how he came to make this film:

“I had known his sculpture at the Metropolitan Museum which he called Variation Within A Sphere Number 10 – The Sun, and I had wanted for some time to explore it in a film, to render its intricate inner life in a special way as could be seen with a camera. Beyond this, I wanted to get at its meaning, of the relationship between this complex, delicate, abstract object, and the experience out of which the artist shaped it into its own organized form.”

We see Lippold’s sculpture, The Sun, in all its many dimensions – a magically glowing sphere of gold. Here is Lippold’s unique version of the star at the center of our solar system. This vision is Lippold’s and only his. Yet we connect. And as Lippold’s Sun reflects back a new and deeper knowing, we get closer to the roots of what we feel. There is a common sharing and such awareness can shed light.

Light awakens the world. We hear Lippold playing the organ, deep and rapturous. We see early morning dew on leaves of plants; we hear birds chirp; a bee pollinates a daisy.

The Sun rises and sets in its predictable rhythm, sometimes hidden behind clouds, yet always shedding light for the work of a city, for the goings on of each person’s day. What is hidden we can discover; and when we do, what is hidden enriches our lives.

This Leo shows us in his film’s images, as he honors Lippold’s vision of the Sun. He takes this artist’s vision into his experience, into universal experience, and opens in each of us what we can uniquely imagine.

Sunlight plays on a little boy’s face as he smiles, tilting his head to escape it; and then catching the light with his mirror. Now he controls the Sun’s intentions, making designs on the metal of a car and on its headlight. Using his mirror’s reflections, he paints the bumper of a 1964 Dodge, next washing the light over its white-walled tires.

The Sun plays with us. It accompanies us through our best days – and our most difficult. Its light radiates on flowers and on the waters of our beaches. The Sun shines on bathers playing on the edge of the sand and in the surf.

A seagull flies across the Sun’s face. A car’s windshield wipers push away the rain, the Sun hidden behind dark clouds. Soon the Sun reveals itself again, reflecting on plants, vegetables, and fruits – food for a new season.

The Sun is the backdrop of our lives – a constant and necessary presence. Without it, we couldn’t live. With its bright light, the Sun raises us out of our doldrums to a happier place – our own kind of prayer for the continuation and stability of life. And, when we need it, hope for a better day.

A small bird scurries across the sand – out of the path of a wave, and rests on a lamppost in the shadow of the Sun. The Sun, reflecting on water and within Richard Lippold’s shimmering sculpture signifies the source of many parts of our lives. Lippold’s glimmering, glimmering Sun; its multidimensionality offers evidence for the layers of everyday life – all that the Sun oversees, gives to, reflects, and protects, like birds flying free in its light.

At sunset, a car backs up. The driver’s arm signals to enter the highway, joining leagues with other cars moving fast in their lanes. Headlights gleam like the Sun, going somewhere; going home.

Women walk on the street; the camera shows us an image of their legs, a purse, black pumps, and one woman in sandals. Then, we pan with the camera’s lens upwards and there are the faces, black and white, a group of friends in the city. As the Sun continues to set, it sends out a radiant shadow over the water, where barges and workingmen are ending their day.

The Sun discriminates against nothing and no one, watching over each of us the same. Not color, religion, age – or anything – separates us under the Sun’s always-available eye. The Sun, setting from its resting place above the clouds of sorrow, hard work, and hardship reminds us a new day is always on its way.

A lone blimp flies across the sky. Car headlights on a highway are sole spirits leading the way; shining as the Sun God shines. The Sun reminds us we each have a unique Self, with the strength and will to find the path we must take. Yet, we aren’t alone on this journey. Perhaps this is why we’ve worshipped the Sun for centuries.

The Sun and Richard Lippold ends with images of Egyptian figures holding the Sun in reverence. We see images: sculptures of the Sun by various artists of diverse nationalities in different eras of time. Then, in the center of the screen, in all its controversial magnificence is Richard Lippold’s installation at The MET, glimmering brightest of all. Turning, spinning with all its multifaceted pieces. The Sun brings together countless bits of experience.

The Sun is the Self at the center of each person’s individual universe waiting to unify disparate parts – waiting to be born.

For anyone, finding this center calls for the qualities Ingela Romare saw in Leo: “It was as if nothing in the universe left Leo Hurwitz indifferent. Everything was embraced with curiosity and concern.”

Curiosity and concern – that’s what it takes to build a life that embraces a collective knowing and to pursue the answers to creative questions. This was, in Leo’s words, his own personal search:

“The talks with Lippold added new insights and stimulated a further quest to discover in it its embracing metaphor – how it embodies not only his experience but mine as well, yours as well, in short our common sharing of the power of the Sun as it lives inside all of us who spend some time on this planet Earth.”

Reflecting on this common sharing, as the Sun reflects its light, we understand each other and ourselves little by little. Just as the hand of the artist transforms bits of experience into a given work, we can take inside ourselves the Sun’s transformational powers. Doing so, we too can change.