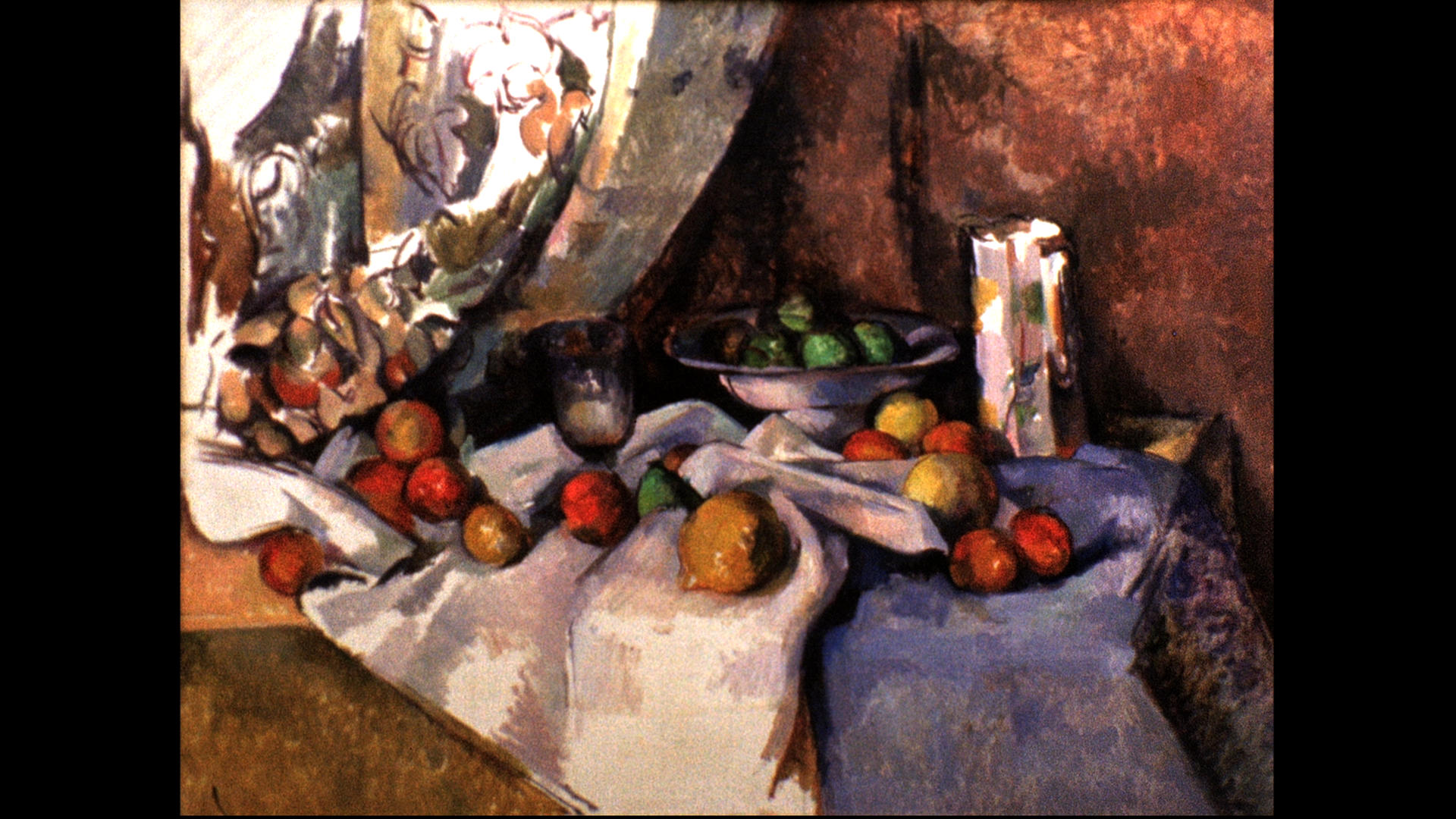 Leo Hurwitz’s 29-minute film, Discovery in a Painting, is a beautiful sampling of his personal passion for seeing. Filmed at MoMA in New York City, this film is one of the various ways Leo explores the importance of seeing with open eyes. For Leo, seeing doesn’t just involve seeing what is there. More radically, perhaps, seeing means seeing what others don’t want to see; and seeing what is hidden but can be discovered if we stop to take a look.

Watching Discovery in a Painting, I couldn’t help but wonder why Leo chose Paul Cezanne’s Still Life With Apples (1895-1898) as the centerpiece of this film. Was it one of his favorites? Was it because Cezanne too insisted on not aiming for illusion, just as Leo Hurwitz did?

Cézanne’s Still Life with Apples is widely considered one of the foundational works of modernism. The MoMA overview of the installation tells us this: “Still Life with Apples (1895-98) demonstrates that the genre of still life can be a vehicle for faithfully representing not only objects but also the appearance of light and space. Painting from nature is not copying the object, Cézanne wrote, it is realizing ones sensations … Still Life with Apples is more than an imitation of life it is an exploration of seeing …”

In Still Life With Apples, Cezanne focuses on seeing the truth of the medium and the objects he painted in all their various perspectives. Here, then, are two artists – Cezanne and Leo Hurwitz – with parallel aims in their lives and in their work. Discovery In A Painting allows the two men’s visions to converge.

We enter the film and see a painting: Still Life With Apples. The painting is featured in the center of the screen in a gilded gold frame on an easel. The camera takes us closer – into the painting. We hear music playing. The camera’s eye caresses every apple, moving along the blue and white tablecloths upon which the apples are spilled. The camera pans back to take in a full view of the painting and then slowly we move forward to take a closer look.

What do I see? I am a viewer among many viewers, some wandering in film images, in the MOMA halls, chattering. But, I am this viewer and I see only what I see through my eyes and my imagination.

I see red, yellow, green shapes: the apples. Not perfectly shaped, but as they might be in nature. And, I see a small sack, not just any brown bag; but a bag as carefully painted as the painting itself. The bag has greens, yellows, and the brown of a branch, and pinks too. The camera moves closer to the bowl holding green apples; music plays in the background, accompanying our viewing. There is sweetness, sadness, and tenderness to the music.

My Eyes and Cezanne’s Ghost

The camera takes me in and out of the painting. My eyes touch every place Cezanne’s brush has touched the canvass; now five red apples and only one yellow are nestled in the white tablecloth, now I see a goblet in purple grays. Entering into the painting, I see each brush stroke from Cezanne’s hand.

There are voices behind me, voices of other viewers in the Museum of Modern Art. Others are looking and talking about what they see. Now I am so close I see the brightness in mounds of green, white, yellow. I am so close I forget that these colors are apples against a white tablecloth. They might be hills or mountains, with snow. I am so close that I see each brush stroke on the yellow fruit – while the music hauntingly plays.

Is the ghost of Cezanne here with me? It is as if I follow his hand as he lovingly creates this still life. I imagine I watch him brushing strokes of paint on an empty canvass, making colors so vivid I see only pure color; bright color as it takes residence and shapes itself into an apple. As I move backwards with the camera, I see the images, whole and complete – apples, a table, apples spilled as if accidentally, but also carefully placed – just the right kind of spilling; what Cezanne’s artist’s eye summoned into this work.

I see, as I accompany Leo’s eye and move closer, this one painter’s hand, each stroke that of a master artist. This is Cezanne’s vision, his own, and it is painted lovingly, perhaps mournfully, as the music might suggest. Is there a sadness that has spilled out? A hunger?

Now, I see a close-up of an apple, the brightest, and most beautiful red. But, along with its beauty I see it’s blemishes. This is life in its realness and truth. I am so close now I lose the apple’s shape. Hidden within these colors, might be an eye. Maybe an eye in a red face, impassioned. Angry. Bloodied. But that isn’t all there is.

Peeling Back The Layers

The brush strokes are a flower now; no, flames breaking loose; no, layers and layers of something – an onion, maybe – that might be peeled back more easily than an apple to see what’s underneath. I wonder, what has gone into Cezanne’s work; those inner forces that I’ll never know?

As the camera moves in closer to the folds of the white tablecloth, I see waves of foam; variations of color – blue white, white, pink white, and a darker blue; water blue. Is it a sea – or, instead, a range of mountains? Just a quickly, zooming out, I see a table again; but then we zoom in on the white strokes and that table becomes a flat plateau bordering a mountaintop – and the yellow/brown apple, the earth underneath the snow.

I’m enjoying my imaginings just when this part of Cezanne’s still life becomes a table again. As Leo’s camera takes us farther away, I see the table with the draping and folds of a white cloth, and apples cascading all over its top.

A bright yellow apple nestles between two red mounds. That yellow apple, not perfect, has a crack, a bite, perhaps an insect’s nibble? I look again and see another apple with mottled, textured colors of yellow, red, and brown, blending together to make a whole. There’s another apple, red, whose brush-stroked countenance, close up, makes it look like the petals of a red flower; softly opening. I want to look inside.

My imaginings move in and out with the camera. The painting becomes a road going somewhere in my mind collecting bits of life. On the screen, now, is the bowl with green apples nestled against dark purple/red ones. Nearby, the cascading of orange, red, and browning apples sits against yellow ones – so bright they look like lemons. Or, maybe they are?

Why is the music so mournful? Is it because Leo wasn’t present to complete this film? He edited Discovery in a Painting in 1969, but the film was never released because there was no soundtrack. Leo wanted music for the film and finally, in 2014, Manfred Kirchheimer, his long-time colleague, friend,  and cameraman for this film, added that soundtrack. Leo was missing then, but he’s with us as we watch, directing the camera’s movement. The music fills me with longing; a piano enters the mix and the tempo and pace quicken, as Cezanne’s brush strokes become fallen petals. I see leaves nestling around a half-eaten apple. No, wait: these brush strokes are fledgling/birds ready for flight.

What do I see – leaves, flower buds, or birds? And, that half eaten red apple, with its yellow swirls – is it rotting or ripening? Either’s possible; or is it that I’m seeing the distinct shape and coloring of this piece of fruit? If I look closely, I see bits of life everywhere.

With my imaginings, I’m collecting those bits; bits that mingle together like the bits on that colorful, not just brown, bag. A branch with flowers; impressionistic splotches of color that become swirls of design shaping into a branch; a blue leaf mingled with green ones, green like a vegetable, a cabbage; and shadows of an apple. I want to keep all the pieces I’ve collected, together, in that beautifully painted bag.

I see a crevasse in the wall behind the table and I wonder what’s inside.

Discovery in a Painting takes us into Cezanne’s painting and into ourselves for a closer look at the bits of life that go on, below the surface. They are inside other people, too, sometimes too far away to reach; sometimes close enough to touch.

We can reach into ourselves if we want to; into the music of our thoughts; the brush strokes of our feelings; as complex and individual as the variations in the paint and objects woven into Cezanne’s Still Life with Apples.

Through Discovery in a Painting, Leo’s camera takes us both into this famous painting and into our own imaginary musings. His camera brings different perspectives – taking us close, closer, further away, into assorted fantasies about the various gradations of single moments in paint and time. Imagination can take us anywhere, even to bits of truth. Then, we come back to a fuller sense of reality. This is Leo’s legacy, and Cezanne’s – if we see what is there, we won’t live in illusion.

The music and the film end with a flourish. Voices of other museum visitors follow us, their murmurs a fading backdrop to our own thoughts. Cezanne’s Still Life With Apples lingers in our minds; and once again we see the painting, the painting we now know intimately – on its easel, as it was in the beginning of the film: just as Cezanne envisioned it.