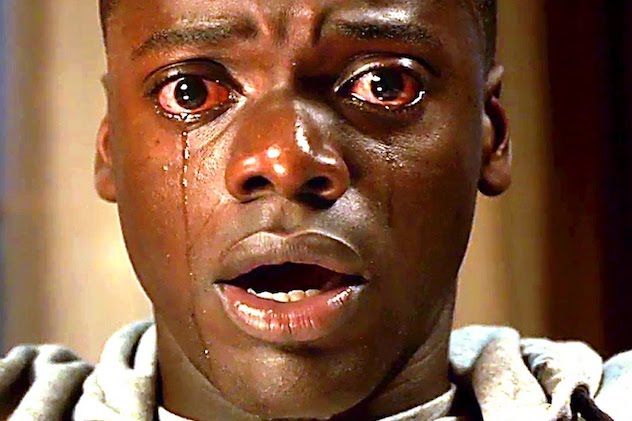 02 Nov GET OUT
Trauma, #Never Again, And “Getting Out”

Jordan Peele’s brilliantly conceived film, Get Out, does its job of shattering the myth that we’re living in a post-racial America. My great uncle, Leo Hurwitz’s film, Strange Victory, did the same in 1948 after we won the war against Hitler but came home to racism here. It’s now 72 years later and there’s still too much to be scared of. Peele tells us he made Get Out to face his fears, mostly of: “Human beings. What people can do in conjunction with other people is exponentially worse than what they can do alone. Society is the scariest monster.” Yes. It is. We see what’s happening in America under Trump, his corrupt cronies, and the surfacing of white supremacy. We must stand up to fear. And we must stop the hate.

The Armitage family in, Get Out, is the epitome of inhuman capacities for hate, blindness, envy, murder, and desire to steal what others have. It is frightening. But Peele has the courage to stand up to his fears. That isn’t easy. He knows the distrust that being mistreated for the color of your skin creates. That can incite anger, terror, a wish to hide. Or understandable rage that makes you do something about it (#Black Lives Matter; #Me Too; #Never Again). And Peele does, by unmasking it all in his horrifying thriller, Get Out.

But, what is it, especially, about his character, Chris Washington (Daniel Kaluuya)? Peele says this: “In his racial paranoia, [he] is onto something that he wouldn’t be if he was a white guy and there was a similar thing going on.” But, hold on, it’s not quite that simple. There’s something more. It’s Chris’s early trauma that helps him “get out” when Georgina (Betty Gabriel), Walter (Marcus Henderson), and “Logan” (Lakeith Stanfield) cannot.

The details of Chris’ trauma are revealed as his girlfriend Rose’s (Allison Williams) psychiatrist mom Missy (Catherine Keener) tries to hypnotize him into the spell she tricks all the Armitage’s Black “guests” into. Chris’s mom died in a hit-and-run accident when he was small. Chris has lived with the belief he could have (should have) saved her. But, he was a little boy; terrified when she didn’t come home; and he didn’t want to think about what scared him the most.

Typical of trauma, Chris removed himself from his fears (we call it, dissociation). While waiting for the mom who didn’t show up, Chris stared at the TV, closed down his mind, and kept waiting for her to walk in the door. She never did.

Later, Chris discovered his mom didn’t die right away. And he’s lived with the belief that if he hadn’t been frozen in fear – he would have called the police or someone to help her. In his guilt, he’s convinced it’s his fault that she’s dead.

Chris’s guilt sets the stage for him to never again let his fear take over. Yet, it’s not an easy road – and Chris struggles throughout most of the film with what he sees – but does not want to believe.

Chris’s fears begin to surface even before he arrives at the strange and dangerous Armitage home. He’s driving there with Rose to meet her parents. They “don’t know” he’s Black. He loves Rose, but love is complicated and hard to trust when you’ve lost your mom and numbed your feelings to go on. That works, if nothing stirs them up. It’s a good thing something did. Chris needs his wits about him. Rose and her family are not people to trust.

So, when Rose hits a deer on the way to her parent’s house, the wheels of Chris’s early trauma start to spin. He won’t leave the deer. Following it,  as it lies moaning in pain in the woods beside the road, Chris stares into its eyes. That deer is his trauma, his dying mother; the mom he was too frightened to help. He’s primed, now, to at least try – to keep his eyes open.

This is the trauma Missy preys on; the trauma she tries to use to weaken him; to sink him into the trap of his old fears and guilt; where he was paralyzed and silenced: “…That day you did nothing … sink, sink …”

That “Sunken Place” is the place where fears live deep inside. Missy knows that. And, as she twirls her spoon hypnotically around and around and around in her cup of tea … Chris falls, helplessly, through thin air, right into the memory of the room where he watched TV waiting for his mom.

He’s there. That’s how it is in traumatic flashbacks. Sinking into that old place of fear and loss. Chris feels it. Tears stream down his face. He’s vulnerable, sad, alone, and terrified. It’s as real as the night it happened. He’s a little kid. Missy’s manipulation almost has him.

At first, he thinks his meeting with her that night was a nightmare, a very old one. But, there are certain clues it wasn’t. Chris remembers the spoon in Missy’s teacup. It never stopped. She was using her training as a psychiatrist to trick him; something no good therapist would do.

This startling awareness is a warning. Not to be vulnerable or susceptible to wishing things were the way he wants them to be. In a strange way, inducing Chris into a flashback/remembering of his trauma, Missy actually does him an unintended favor. She “helps” him break out of the paralysis of fear he was in as a young boy who lost his mom.

And, so: Chris begins to watch – Georgina and Walter, and then, Logan. Although it’s not a smooth path to get there – Get Out and #Never Again starts to take over.

What Chris sees, and what we see through his eyes, are frightening signs of trauma (and mind control). Georgina is in the trance Missy Armitage keeps her in. She’s pretty much a robot. In her stilted, fake, state her too broad, bright and put-on smiles, her speech; her pleasantries are wooden.

The only time we see anything real is when Chris, trying to befriend her, says: “If there are too many white people, I feel nervous.” Georgina starts to tremble. Shaking visibly, she begins to come out of her trance. But, either her terror is too much (or Missy has her too well programmed):

Something similar happens with Logan. In his old real self, he was an artist who has gone missing.  At Missy’s parent’s house, he’s married to an older wealthy white woman, a friend of the Armitage’s, clearly possessive of him (“a sex slave” as Chris’ friend Rod (LilRel Howry) has warned him the Armitage’s are trying to create?) When Chris tries to befriend a “brother,” Logan tells him “the African American experience has been good to me …”

Rose’s Hitler-esque neurosurgeon dad, Dean Armitage (Bradley Whitford), says it’s a seizure. It’s not. Chris knows what a seizure looks like. Plus, this isn’t the attack on Chris it seems to be. It’s actually a warning. Chris is in danger.

The Trauma: Abandonment & Fear Of It …

The problem is, Chris doesn’t want to fully believe the obvious clues that Rose’s family, and Rose herself the woman he loves,  are up to no good. He needs love; he wants Rose’s love. His mom’s death left him too alone and this need almost blinds him.

But, wait a minute – Rose has lied. He’s not the first Black man she’s ever dated. Chris found photos in a box – of Rose with Black man after Black man – including Walter and Logan. Georgina is there in the box too.

Chris is scared, very scared – and he tries to leave, but he can’t. Rose “doesn’t want him to go.” In Chris’s mind, Rose isn’t the Rose who is clearly a part of her family’s “Order” and their plot. Rose, who begs him not to leave (tricking him into thinking she can’t find her keys) is his abandoned little boy/self, frightened of being left; and he vows not to abandon her.

Chris’s fear of abandonment makes him hesitate; clouding over the truth. He’s pulled into the Sunken Place, the basement of the Armitage house – and, momentarily, into the terrors that threaten to freeze and silence him again.

How to Get Out: Reality (& Rod) To The Rescue

The voice of reality still speaks in his mind as he sits, arms strapped to a chair, fighting to keep his eyes open and remember the truth. Earplugs in – using “no, no, no, no, no” to his benefit – Chris keeps his wits about him and stays awake, not succumbing to hypnotic mind control. There’s the hope   …  to Get Out.

It’s him or them – reality or the fantasy of acceptance that doesn’t exist in Rose or in this house. His only choice is to defeat the ones that want to rob him of his strength and identity. These are the Armitages – and, also, a part of his mind that doesn’t want to know or feel. What almost does him in is the traumatic loss of his mom. But, it’s also what saves him.

And, his best friend Rod, TSA agent and voice of reality, has been in his ear the whole time warning him of the oddities and the dangers. Rod might sound paranoid, but he’s not. And, when he can’t reach Chris on his cellphone anymore, he goes on a mission to find him.

Saved, they drive off together, leaving Rose on the road dying, still trying to seduce Chris into staying. Perhaps we can suffice it to say that the “right woman” dies on the road, this time. That is – if we might call Rose the part of Chris that has seduced him into guilt, silence, and blindness. And, which made him live in his Sunken Place of fear.

But no more and #never again. Chris fought his fear. He stayed, 2, 3, and 4 steps ahead as Jiu-Jitsu taught him to do. He was able to keep his eyes open. And, in standing up to his fear, Chris manages to GET OUT.