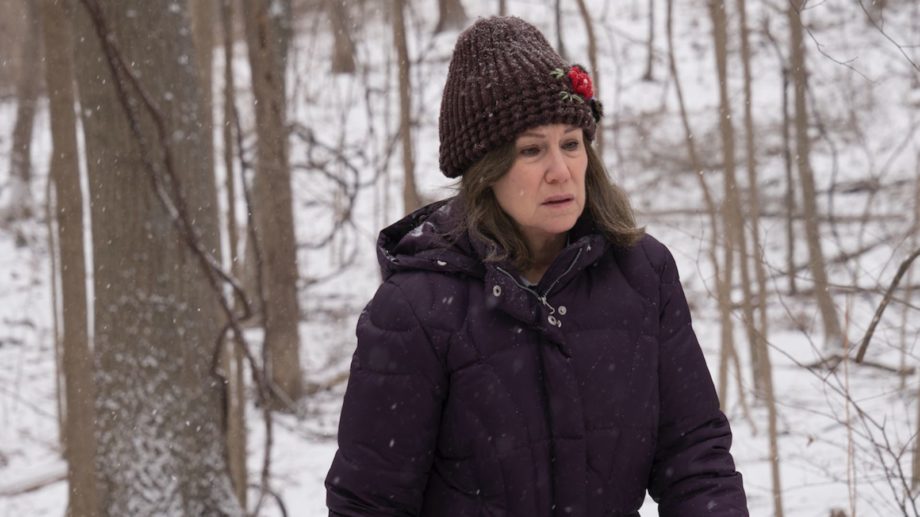 Shame can ruin a life. A mistake can force a woman to live in self-sacrifice. For Diane, the reasons why are hidden in the loaded question: “How is Brian?” This question haunts her through the entirety of Kent Jones’ character-driven film, Diane. Not only is Brian Diane’s alcoholic and drug-addicted son, but underneath her attempts to save him is the reason for her guilt. She never feels she can make up for what she did many years ago. Nothing lets her off the hook. She’s locked in a prison of voices muttering relentlessly in her mind. How does a woman like Diane find a way out of her constant torment? It would help if she didn’t feel too guilty to take anything from anyone. The reasons she can’t are at the heart of her shame.

You see, Diane (Mary Kay Place) took what didn’t belong to her. She ran away with Jessie one summer on Cape Cod. Jessie was her cousin Donna’s (Diedre O’Connell) boyfriend. As if that isn’t bad enough. Diane cheated on her husband and abandoned Brian (Jake Lacy), a little boy, to the heartbroken Donna’s care.

Now, Donna is dying of cervical cancer. Brian is a drug-addicted alcoholic. And Diane spends her life serving homeless in soup kitchens, taking casseroles to needy family and friends in her Massachusetts hometown, and trying to save Brian. Her large family cares about her, Donna says she forgave her long ago, but Diane can’t forgive herself.

Diane is a haunted woman. For a summer of happiness that she clearly didn’t have enough of, Diane thought only of herself. Not her cousin, not the little son that needed her, not the husband she actually did love. So she punishes herself by not taking anything more. In fact, nothing at all.

No, Diane can’t ever take anything again.

Diane wasn’t there for the people who needed her that summer on Cape Cod. Now, she tries to make up for that to everyone. To show herself she’s not a selfish person, she can’t do enough.  She constantly flagellates herself by martyrdom and sacrifice.

She’s always there. Showing up at Brian’s apartment every day. Doing everything for anyone that needs anything. Her terrible guilt about abandoning her son makes her believe that his drug addiction is punishment for what she did. Now, he turns his back on her in his stupors,  relapses, in his refusals to accept help.  Just as she did to him.

And, Diane can’t apologize enough. She’s constantly saying she’s sorry for something. Especially if she shows any need. She’s starving for love and attention, but her self-punishment allows her to take nothing.

She already believes she took too much. From Donna, Brian, and her husband. Her hungers and needs are projected into other “down and out” people. The ones she feeds every day at the soup kitchen.

Diane’s life is one big apology.  At the soup kitchen, Tom (Charles Weldon), one of the regulars, bows his head in prayer at the table, rocking himself.  Diane walks by and touches his shoulder. She cares about him and all of them, she really does. As much as she cannot care about or like herself.

When one of the other workers yells at Tom for coming back for a third helping, she loses it: “These people didn’t come here to get punished.” Diane knows about punishment. Her closest friend Bobbie (Andrea Martin) reaches out to her: “It’s you I’m worried about, you need some peace.” But, there is no peace for the tortured.

Diane’s guilt and shame eat her up. She apologizes again to her dying cousin Donna, asks if she’s really forgiven her. “Yes, I forgave you long ago, but I haven’t forgotten. Once in a blue moon, I remember how shitty it felt to take care of your son while you took off with my boyfriend.”  That’s not reassuring to Diane at all.

She wants Donna to forget. Diane wants to forget too. Forgetting, she imagines, would rid her of guilt. But, she can’t forget either. Brian’s drug and alcohol addictions (perhaps hers too?) are about trying to forget. So is Diane’s constant busy preoccupation with doing everything to make sure everyone else is ok when she’s not.

But, of course, there are reminders. She can’t get away from those.

At the house of some of her large extended family, she hears Chick Corea: “I listened to him a lot one summer.” That summer. And, she doesn’t really believe she’s been forgiven. Forgetting doesn’t work. And, yes there are constant reminders.

Scared to death Brian will die if she isn’t constantly showing up, she comes unannounced every day to check.  She must see if he’s alive. No matter that he’s mad at her intrusions. Or that he’s a grown man of probably late 20’s or 30. It’s been 10 years trying to save him from addiction. Probably more than 20 years of guilt.

And, when he tries to tell her – high, disheveled, living in squalor – that no one understands or listens to him, this doesn’t help her guilt. She certainly didn’t give a second thought to the fact that a little kid would have feelings about his mom taking off and leaving him. He lives with that. So does she.

Suddenly, day after day, she can’t find him. He’s disappeared. Just as she disappeared on him. Diane’s panicked. Looks for him everywhere. Certain he’ll turn up dead. She ends up in a bar. Drinking alone, playing old songs on the jukebox, until she’s so drunk the bartender cuts her off.  Outside, she collapses, screaming and sobbing.

Two elderly women show up to help her home. Her aunt, Donna’s mom, Mary (Estelle Parsons), and a friend. Diane can’t really accept their help. She apologizes, of course. Mary kindly tells her: “No honey, with what you’re going through I’d be surprised if you didn’t come a little undone.”

Brian. Is she responsible for his drug addiction? Probably not entirely. But, Diane isn’t any more capable of dealing with her feelings than he is, so where did he get the need to escape? She can drink herself into a stupor. And, in a dream or reality, it’s hard to tell, a pusher comes and shoots her up with heroin.

But, neither escape or self-deprivation drown out the voices in her head.

The Voices In Her Head

Donna’s close to death. The family surrounds her bed. But, Diane gets a phone call from the missing Brian and has to walk out of the room. Donna is gone by the time she returns. Not there for Donna again. Mary hugs her reassuringly: “She loved you.” It doesn’t help.

Nothing assuages Diane’s guilt. Now, it’s only worse. Yes, Brian detoxed on his own. He’s sober. Does that reassure her? Not really. She lives with the constant chatter of memories,  guilty thoughts – a running tape playing in the back of her head. Voices. Ghosts of the past that won’t let her be.

She can’t let anyone help her, so she begins to write a journal. Goes to a Pentecostal church. Tries to either get healed, forgiven, or to forget. Bobbie dies. A big loss. So do many others. Years pass. Brian marries and converts to Christian fundamentalism. He tries to convert her. She didn’t give up on him. He won’t give up on her.

He sees her torment. Wants her to be saved, to have “the gift of revelation.” Diane gets mad. They fight. She blames him for disappearing and then making her miss Donna’s death: “You mean the cousin you left me with when you went off with her boyfriend? That cousin? I wouldn’t want to bear that guilt.”

Diane closes the door to him for a long time. She’s more alone than ever. Drops a platter of food at the soup kitchen. Tom goes to help her, she says no. He insists: “Sit down, my friend. Isn’t it enough that I told you I want to help you?” He tells her about an aunt that wrapped herself in shame.

Yes, Diane knows about that.  Will anything ever save her?

How To Get Free (Or Not)

You’d think Tom telling her how much her kindness helps him would make some difference in stopping those voices of guilt. Might show her she’s not as bad as she believes. Nothing gets inside. Even Tom saying: “When I come for a meal, I feel pretty low about myself and my situation. But, when you serve me, Diane, I feel sanctified.”

Brian comes to find her and makes sure she knows he forgives her.  Says, that he loved Jessie (and his dad), that “I taught myself to disapprove of you.”But, really, he understands: “Please remember. I saw how happy you were.”

Sadly, that doesn’t help Diane either. To get free of guilt, help must be allowed. Kindness has to penetrate through the walls of guilt and shame. Forgiveness is a gift and can bring peace if you let it. Only so many apologies are needed.

Instead, she writes: “ My Shadow, it is with me from hour to hour. It goes to bed with me at night and wakes up with me. My terrible sin. My closest companion. He keeps whispering, don’t forget me.” She goes through photos of Cape Cod, memories of Jess.

Letting Go Of Guilt Is “Dangerous”

Yes, Diane must remember her “sin.” For her, happiness is tied to guilt. Getting free, accepting help and forgiveness, is dangerous. The only way to live, she thinks, is to continue her self-flagellation and deprivation. Her punishment. It’s dangerous to get happy again. What mistake might she make next? She might forget something.

The film ends with an old woman … is it Diane? Or what she will become since she can’t get rid of that Shadow? Still haunted and tormented by the voices? Rumbling always in the background, refusing to set her free.

“There was someone. I need to find my place.”

These are the ravages of guilt. For running towards a moment of stolen happiness. Self-condemned to an unhappy life. Without any help, unable to accept love or forgiveness, Diane never finds her happy place or is able to rest in peace.

I’m Dr. Sandra Cohen, a Los Angeles based psychologist and psychoanalyst. I work with people struggling with a difficult past, tortured by voices in their heads that condemn them to guilt and self-punishment. This can be understood and worked out. You can live a happier life.