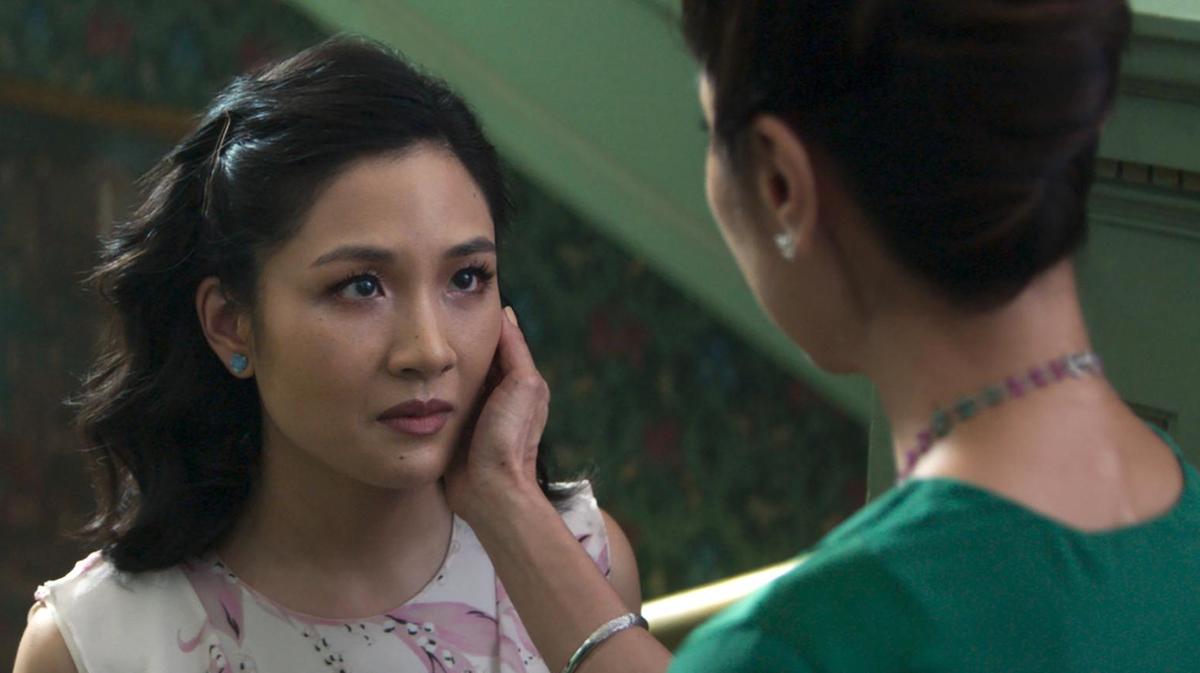 Jon Chu’s Crazy Rich Asians is about crazy wealth. But it’s really about so much more. It’s about the clashes between old money and new; between privilege and disadvantage; between American born Asians and those calling Asia home; between following passion and giving into duty. Mostly it’s about a boyfriend’s mother’s envy. And, at the film’s center we find this conflict between a traditional Singaporean mother and her son’s Asian American girlfriend. At an even deeper level, Crazy Rich Asians is really about two different parts of that mother battling against each other.

Rachel Chu (Constance Wu) is the youngest Economics professor at NYU. She’s passionate, she’s smart, she’s driven, she’s fun; she’s warm. She’s in love with Nick Young (Henry Golding) and he’s in love with her. They live in New York City and they’ve been together a year.

Now they’re traveling to Singapore for Nick’s best friend, Colin’s wedding (Chris Pang). Nick wants everyone “to meet the brilliant Rachel Chu.” Little does she know what she’s getting into.

You see; Nick Young is the son of one of the wealthiest old money families in Asia. They’re as close to Singapore royalty as you can get. He didn’t want Rachel to know because, with her, he likes who he is. He’s battling against his history too – but in a different way than his mom.

Nick wants to be himself. Eleanor Young (Michelle Yeoh) gave herself up.

Crazy Rich Asians begins in 1995. What happened then helps us understand Eleanor Young. But more to the point, it gives us our first clue to who Rachel becomes in Eleanor’s mind.

In 1995, Eleanor and her two young children enter London’s Carlthorpe Hotel. Although she has a reservation for a large and exclusive Penthouse suite, the manager doesn’t believe her (and certainly doesn’t want her in the hotel). She’s Asian. He tries to turn her away.

She asks to use the phone to call her husband. The Manager refuses. Eleanor feels the sting of hateful dismissal. She goes outside to a phone booth in the pouring rain.

After making her call, she re-enters the lobby just as the elderly hotel owner rushes off the elevator to greet her warmly. He turns to the cowed Manager and says: “Meet Mrs. Eleanor Young, the Carlthorpes’ new owner.”

Eleanor walks off with a flourish. Reversing the dismissal, she tells the Manager to clean the mud off the floor.

But, as we will see, Eleanor can’t so easily wipe away her self-hate.

The Why’s Of A Boyfriend’s Mother’s Envy?

In 2015, Rachel Chu becomes the recipient of the same cruel dismissal. Eleanor isn’t sparring with Rachel, though. She’s fighting a part of herself that feels never good enough; no matter how hard she’s tried to become someone else.

Eleanor’s “All Wrong” Self

Eleanor was a girl much like Rachel. She wasn’t from the “right” family; she didn’t have money. She was studying law when she met her husband at Cambridge. She withdrew to be the “right kind of wife,” to help him with his business and to raise their children.

Rachel won’t be anything more than Eleanor. And she certainly won’t have it easier than Eleanor did. Eleanor will make sure of it. She’ll even ruin things if she can. That’s the goal of envy.

She even had to give up her son.

Eleanor let Nick live with Ah Ma as a little boy, so he would be the favorite when she could not. Eleanor still carries that younger self inside. But, she won’t feel that way again. Rachel will.

Not “One Of Them”

Arriving in Singapore, Rachel and Nick are greeted at the airport by Colin and his fiancé, Araminta (Sonoya Mizuno). They’re warm and wild. Rachel’s first introduction to Nick’s old life is of street vendors and every day fun in the city.

But, this isn’t Nick’s real life. His status in Singapore is not at all “every day.” He’s the most wealthy, eligible and sought after bachelor in the city. And no one (especially all the jealous women who want him and will make Rachel pay) can stand that an American born woman has already taken him.

No, Rachel is definitely not one of them. And, she makes a lot of “faux pauxs” as she tries to ingratiate herself to Nick’s mom.

She hugs Eleanor in an overly friendly way; she spills red wine on Nick’s white shirt at a cocktail party; she tells Eleanor about following her passion for Economics to gain her position at NYU.

Eleanor is not about following passion. She turns up her nose: “Following your passion? That’s so American. Your mom must be very open-minded. Not like us who shape our children.”

In her cold and superior way, Eleanor lets Rachel know what’s expected: women like Eleanor help their husbands. They do what’s required of wives in her position. Even giving the mother-in-law all the power.

Eleanor tries to split Nick and Rachel apart from the get-go.

Sure, she wants her son home. She expects him to partner with his father in business (“When kids are away from home too long they forget who they are.”)

But it’s actually  more than meets the eye. Rachel reminds Eleanor of a past she doesn’t want to remember or re-live.

So, when Rachel admires her large emerald engagement ring; Eleanor pointedly tells her the story of how she gained Ah Ma’s approval by learning her duties and performing them well.

That meant giving up her passions, her self, and her son.

Eleanor has had to fight off feelings of inferiority for years. Now, she’ll make Rachel pay the price: “I had no idea the work and sacrifice it would take. But, having been through it, I know this for certain:”

“You will never be enough.”

Rachel has her own fears of not measuring up. She’s the daughter of an immigrant mother, Kerry Chu (Kheng Hua Tan), who struggled to make it on her own. But, her good friend and college roommate, Peik Lin (Awkwafina) bolsters Rachel up:

“Make her respect you.” That’s no easy task.

Eleanor makes Rachel suffer. She rejects her at the wedding; alone while Nick is best man: “Rachel, how lovely to see you. Our row is full.”

Rachel shows her up. She befriends a Princess (also an Economist), animatedly engaged while Eleanor watches. Touched, Rachel cries as Colin marries Aramanta and Nick mouths, “I love you.”

Rachel is what Eleanor is not. Eleanor has to win.

She hires a private investigator to find out who Rachel Chu really is. He digs up a story about Rachel’s birth that even Rachel doesn’t know. Eleanor forbids Nick from “degrading” the family.

Rachel, devastated, runs away to Peik Lin’s and takes to bed. She won’t answer Nick’s calls. She won’t accept his proposal of marriage. She prepares to leave Singapore for New York.

Eleanor thinks nothing of hurting and humiliating Rachel to get her way.

How The Girlfriend Wins

For Rachel, it’s not about money, duty, or winning.

But, she can’t leave Singapore without facing down Eleanor and letting her know who Rachel Chu really is. She challenges Eleanor to Majong. As they play, this back and forth transpires between them:

Rachel: “You don’t want Nick to be happy.”

Rachel has the winning tile. She hides it, though, and lets Eleanor think she wins the game. But, Rachel’s real winning tile is her love for Nick:

“There’s no winning. If he chooses me, he’ll lose his family. If he chooses you, he’ll resent you. I know I’m enough. But, when he marries another lucky girl and you’re playing with your grandchildren, I want you to remember that it’s because of me: a poor, low class, immigrant girl, raised by a single-mom, who didn’t want him to lose his mother again.”

But … Does The Girlfriend Really Win?

Crazy Rich Asians ends as Nick shows up on the airplane before Rachel takes off for NYC. He won’t let her go without him. He proposes again to a cheering crowd – but this time, with Eleanor’s emerald ring.

Is this a peace offering? Or is it a backhanded way to let Rachel know that if she marries her son, she’s expected to play a role she can only fail at: being as good at self-sacrifice as Eleanor?

The best ending would be Eleanor’s acceptance and support. Yet, Eleanor’s emerald might be another attempt to play the winning hand.

Envy doesn’t give up easily.

Does Eleanor have it in her to soften and let Rachel in? And, can Rachel hold onto her passion and herself?

We’ll see. The fight might not be over yet. Only the upcoming sequel will tell.