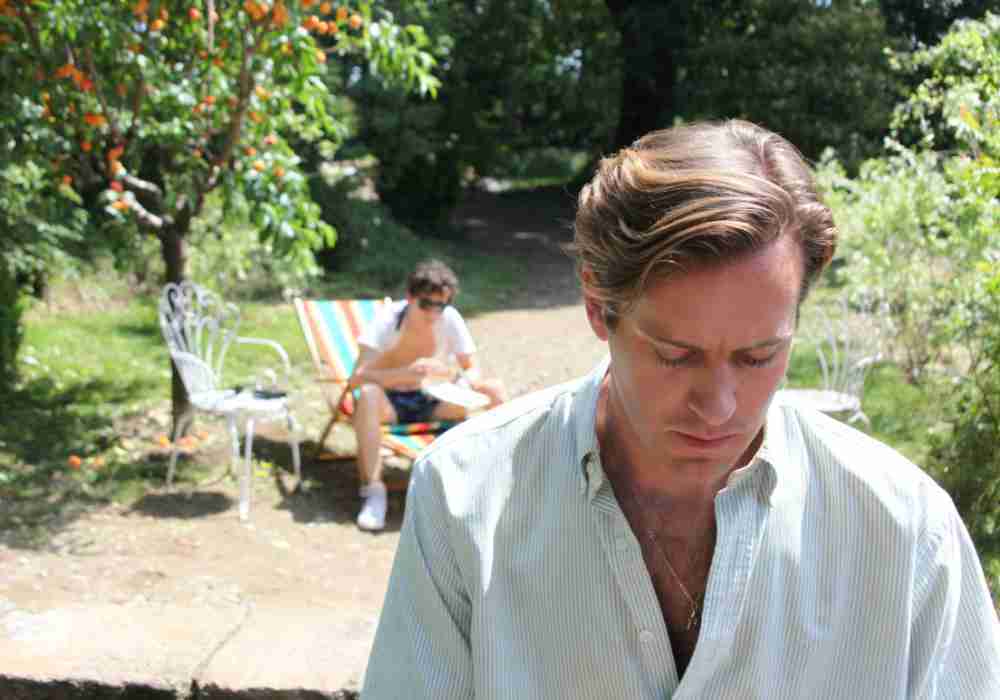 15 Mar CALL ME BY YOUR NAME
I Am You. You Are Me. I Will Find Myself In You. Will I Feel Everything?

Desire is what director, Luca Guadagnino, hoped to convey in Call Me By Your Name – the kind of desire that allows you to live life by following your feelings with openness. Guadagnino calls this: “living with a sense of joie de vivre”, in which, he says: “we should always be very earnest with [our] feelings, instead of hiding them or shielding ourselves.” This is at the heart of the struggle both Elio (Timothee Chalamet) and Oliver (Armie Hammer) must overcome as their love unfolds. Call Me By Your Name is about more than desire, though; it is a film about discovery … the discovery of love; self-discovery; and the experience of loss. It’s about feeling everything even when you want to feel nothing.

Seventeen year old Elio Perlman and Oliver (a graduate student in his 20’s) meet when Oliver arrives at the Perlman’s vacation home in Lombardy, Italy. He is there to study under Elio’s dad (Michael Stuhlbarg), a well-known researcher and academic archeologist. When the two young men are introduced, Elio is asked to show Oliver to “his room.” Elio says: “My room is now your room,” a prelude to the title of the film.

In Call Me By Your Name, the film’s gorgeous setting and cinematography highlight the beauty of Elio and Oliver’s love. Yet, the slow meandering of the film also underlines the cautiousness out of which that love grows. At first, they keep their distance. They look (or try to look) as if they have no feelings or real interest in each other. Eventually that distance shifts and a very specific desire emerges – initiated by Oliver’s request to “call me by your name and I’ll call you by mine.” How do we understand that desire?

Oliver and Elio are two sides of the same coin – with variations, of course. They both use an all-too-smart (and they are), intellectual, even a bit arrogant defense to guard against feelings and insecurities. Oliver’s insecurity is about doing something “wrong.” Elio’s is about being dismissed. He doesn’t much like Oliver’s cavalier, “Later.”

Perhaps these insecurities come from their fathers. Oliver’s father, we discover at the end of the film, has certain standards about the “way” his son should live (and who he should love). Oliver fears punishment for not being “good.”

Elio’s father is different. He understands the nature of Elio’s desire. But he has his own difficulties with feelings; and he, too, uses an intellectual, “smart” defense. Plus, it’s not unlikely, that Elio feels “dismissed” and in competition for his dad, when other bright students (like Oliver) come to study – making Elio watch, sit in the “back seat,” feel on the outside; that the other is “better.”

These are Elio and Oliver’s vulnerabilities and they play them out with each other. Elio watches Oliver’s self-assured, assertive, arrogant repartee and secretly has his eyes on every move Oliver makes. Oliver, in all his apparent self-confidence, gives rather mixed messages.

Oliver isn’t really as secure as he looks. With his feelings, he isn’t forthright at all. Actually, he’s very unsure of the “goodness” of his desires. He rubs Elio’s shoulders. They swim together. They banter. This is how they begin; by keeping an intellectual distance.

But, in one essential piece of their banter is a clue – to the difficulty between them and inside them. Their feelings are in hiding.

This clue emerges while swimming together for the first time and then talking about ideas. Oliver says to Elio: “listen to this dribble … (it’s derived from Heidegger, but seems to be something Oliver has expanded on in a book he’s writing): “underlying hidden-ness is constituent to the way human beings are … not only in relation to themselves, but in relation to other entities in general.”

It’s true. Oliver and Elio are hiding – their interest in each other. What about that statement to Oliver? “It doesn’t make any sense to me. I don’t think it makes any sense to your dad either.” Elio says: “Maybe it did when ‘he’ wrote it.” Oliver gratefully replies: “That might be the kindest thing anyone’s said to me in months.”

It’s kind because Elio gets him. He’s hiding too. In a deep way, Elio gets Oliver’s fear about his goodness. And, he becomes a mirror for a goodness (when it comes to feelings and desires) that Oliver doubts. This chance at understanding spurs Oliver to want to get inside Elio’s name: to be Elio and to see himself through Elio’s eyes.

They banter and they spar. They dance around their feelings. Oliver keeps Elio at bay. In one scene, Elio picks up the ancient hand of his father’s archeological find – reaching that hand out to Oliver, who shakes it. “Truce?” Elio asks. Instead of the game they play, will they speak their truths or won’t they?

Elio’s mom (Amira Casar) reads an old German love story to Elio and his dad. In the story, the knight asks a woman: “Is it better to speak or to die?” Elio says: “I’d never have the courage to ask a question like that.” His dad replies: “I doubt that Elly Belly. You do know – you can always talk to us.”

Later, Oliver, who knows the story too, pointedly asks Elio: “Well … does he or doesn’t he [speak]?” It’s a question really directed at Elio and Elio obliquely answers: “’Better to speak’, she says, but she’s on her guard. She senses a trap.”

If he speaks, what is the trap for Elio? That Oliver will leave; say goodbye; dismiss him with his, “Later?” Oliver’s face is serious and troubled. He presses: “Does he speak?” Elio replies: “No, he fudges.”

And so, for a while, they continue to fudge with each other. But, when Oliver asks if there is anything the very smart Elio doesn’t know, Elio speaks his truth for the first time: “I know nothing, Oliver … about things that matter. I thought you should know.”

Oliver hesitantly asks: “You saying what I think you’re saying?” Elio answers: “Yes … but I shouldn’t have said anything.” Oliver is just as anxious: “It just means we can’t talk about these kinds of things – we just can’t.”

But, they can’t stay away forever. Soon, they kiss and there is an “Us.” Oliver, scared, pulls away: “We should go. We haven’t done anything to be ashamed of. We’ve been good. I want to be good.”

This question of goodness is more Oliver’s struggle than Elio’s. Elio’s fear is of Oliver going away. And, Oliver does. He stays away all the next day into the night. This is the “later” Elio’s afraid of.

We watch Elio’s hurt. He says over and over: “Traitor; traitor.” Perhaps he’s also talking to himself – at least the part of him that took the risk to be open with his feelings. He writes to Oliver: “Your silence is killing me.” He’s afraid he’s made his desire much too obvious: “I’d sooner die than know you hate me.” When Oliver reads the note, he says: “Grow up, I’ll see you at midnight.”

Elio looks at himself in the mirror: “Do I know you?”

Daring To Know/Wanting To Look

Neither Elio nor Oliver knows these feelings or desires. But, now, more certain of being wanted, they make love. In the height of passion, Oliver says to Elio: “Call me by your name. I’ll call you by mine.”

They look to find (and know) themselves in each other. Elio says, after their lovemaking: “You wore that shirt the first day you were here. Will you give it to me when you go?” Oliver does, with a note: “For Oliver. From Elio.”

Calling each other by the other’s name: “Oliver!” “Elio!” continues throughout the rest of the film: when they swim the next morning; on the trip they take before Oliver leaves for good. Their names are an echo – of what they see and what they find in each other. They find their goodness. They find the feelings both have blocked with their distance and their smartness. They find who they are in the other’s eyes. Can those feelings stay?

Oliver and Elio travel together, but the inevitable does come. Elio watches watches Oliver go. He watches Oliver’s train pull away. This is the “Later,” he feared. This is the parting he did not want. Sadder than he’s ever been, he calls his mom to pick him up. Later, he talks to his Dad. His dad helps:

“When you least expect it, nature has cunning ways of finding our weakest spot.” His weakest spot is feeling – especially sadness and loss. His dad encourages him to feel:

“Right now you may not want to feel anything. Maybe you never learn to feel anything … [but] feel something you obviously did … [and] to make yourself feel nothing so as not to feel anything: what a waste. I never had what the two of you had; something always held me back or stood in the way … right now, there’s sorrow and pain – don’t kill it and with it the joy you felt.”

Don’t hold yourself back. Don’t hide. That’s what Elio’s dad is saying. He’s saying to keep speaking the truth of his feelings – to himself and to others. That means taking a risk. It means being open. It means, sometimes, being very sad. It also means being happy. Mostly, it means not shutting down possibilities, in life or in love. Can they do this – Oliver and Elio?

At the end of Call Me By Your Name – we see that Oliver has put his feelings, at least in part, back in hiding. He calls at Christmas and tells Elio he’s getting married. Elio tells him that his parents know about them. Oliver says longingly: “You’re so lucky. My dad would have carted me off to a correction facility.”

Can Oliver and Elio learn to bear their feelings – all of them? With his Dad’s help, we know that Elio has the chance to live life with openness, desire and the kind of “joie de vivre” Luca Guadagnino encourages us to have. Sadly, Oliver’s at risk of going back into hiding – a fate not any of us really wants to have.

armie hammer, call me by your name, characters on the couch, daring to feel, daring to know, desire, finding yourself in the other, james ivory, love, luca guadagnino, michael stuhlbarg, timothee chalamet