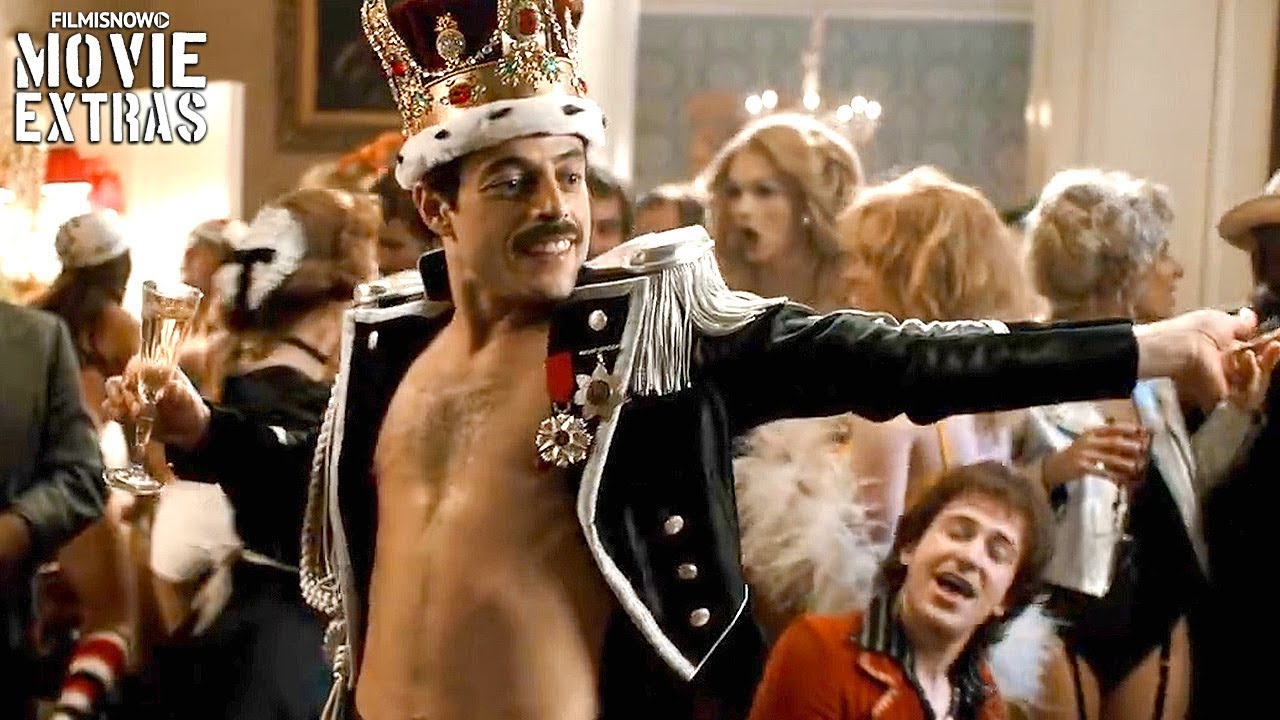 14 Feb BOHEMIAN RHAPSODY
Trying To Manage Doubts About Love?
Going Solo Is Not The Answer

We watch Freddie’s struggle, trying to manage doubts about love; by trying to find a likable self in the eyes of his audiences. And, when the glow of those eyes; that applause; their awe is gone; falls into an abyss of dark self-effacing fears about who he believes he’s not. Is he only loved for what others want of him; and for what he gives? Would he be loved if he stepped outside the musical ghetto/box he’s built around himself? Is he really just a misfit; an outcast? Will he ever belong anywhere? And, mostly, if he lets himself need someone; will anyone be there at all?

Freddie looked for love everywhere. Especially in the sea of faces admiring him as he sang; feeding off his energy; and he theirs. In them he found the love he thought he needed magnified by thousands. He belonged to them: “What makes Queen different than any wannabe rock band..?” In Freddie’s words: “Four misfits who don’t belong together; playing to other misfits; the outcasts in the back of the room; pretty sure they don’t belong either. We belong to them.”

Freddie Mercury (Rami Malek) needed to belong. And, Freddie belonged to Mary (Lucy Boynton) for a time. She/his audiences/and sometimes Brian (Gwilym Lee), Roger (Ben Hardy), and John (Joseph Mazello), his chosen Queen family). Their approving gazes were the only love he could see/when they are seeing him: “I know I have them. I couldn’t sing off key if I tried. I am the person I was always meant to be. The only other time I feel that way is when I’m with you.”

That was Mary. He’d found Mary, his later fiancee and “love of my life” just as he joined the band. Mary dressed him and helped him create the Freddie Mercury of Queen. She brought the real Freddie out of a closed off space inside him. She believed in him as no one ever had. And in real life, for a time, Mary became those eyes of love he constantly sought.

But, Freddie was confused; and couldn’t give her what she needed; as he was being pulled away from her by his attraction to men. He left her home, lonely; as lonely as a hungry, self-despising sealed off part of Freddie was; the one who felt he was “easy come easy go;” and that so was love.

Desperate not to lose her; wanting her always in his sight and reach; Freddie kept her sealed off in the house he bought next door. Looking out his window into the light of her bedroom each night; he needed to see her gazing back at him. But, as much as Mary loved him, being Freddie’s sequestered princess wasn’t enough. She found David; and moved on.

And, then there was his Queen family … he felt they left him too.

So, what was Freddie to do, in those seemingly endless (and excruciatingly lonely) spaces between basking in the glow of his audience’s admiration/love/? He drank; partied; got himself involved with “friends who weren’t friends but only distractions.” Distractions from the dark questions lurking deep inside him; the doubts he wanted to think had gone.

Bohemian Rhapsody is Freddie’s song. And many of the words he wrote capture Freddie’s struggle; the dark thoughts and places he lived in in those in-between spaces where he had no admiring eyes to assure him; or to hold him together. Yes, Freddie was confused about love. What was real; and what was the fantasy.

And, because of this confusion; along with the fear he felt that those people he counted on didn’t love him at all, he had to make his escape. A flight into, “I need no sympathy; no one at all.” But, really? Freddy lived with an aching deep down feeling of being a “poor,” hungry boy every day; of being “easy come easy go” to everyone he might want or need. Leaving him as famished as those starving children in Africa.

Is this the real life?

Is this just fantasy?

Caught in a landslide

No escape from reality

Look up to the skies and see

I need no sympathy

Any way the wind blows

Doesn’t really matter to me, to me

Inevitably, over and over, he was caught in the darkness that crept back in, in the empty spaces: his alienation from his parents; from Mary now with David. His fear of closeness; of confusion about love. Barraged by questions screaming at him in his own head about his sexuality; about who he was. Making him a lonely king; with no real connections outside his flamboyant performances and staged identity.

What else could he tell himself, then? But “It doesn’t matter to me. If I’m easy come, easy go, then you don’t matter either.  And, I don’t need anyone at all.”

Freddie, of course, needed quite a lot. But, having needs was a very insecure place to live; convinced he had to go it alone; a misfit; an outcast; not feeling seen. Or that he’d ever belonged in his traditional family; who didn’t “get him,” to say the least. Plus, he battled a voice inside his mind, I am quite sure, that didn’t accept him either; and saddled him with constant self doubt.

Freddie Mercury overrode his insecurities with a ballsy self-righteous; know-it-all attitude. And often he was right, which only reinforced it. About what Queen needed and where they were going.  Only Freddie could provide it, he strongly believed; not being able to rely on anyone. And, if someone didn’t give him what he thought was best; they were gone.

Freddie clearly needed people. But, he controlled this need by “I don’t need anyone;” getting rid of people before or if they betrayed; left; or disappointed him. And, of course, everyone inevitably did; having their own separate lives; as people who trust love do. Roger, Brian, and John married and had families. Mary went her own separate way to find the love Freddie couldn’t give her. She got pregnant. And, as sensitive and frightened as Freddie was, he misinterpreted this separateness as rejection.

So, when Freddie had love; or what looked like love; it was fragile and complicated by a deep confusion about what love is. They all loved him. Yet, they couldn’t give him the constant focus of an admiring crowd in the moments he held them, spellbound, on the stage. And, this was the only way Freddie’s insecurities could be appeased.

The Darkness Of In-Between Spaces/Running Away

The spaces-in-between his performances/with all the enraptured eyes gone/left him in a deep abyss, barraged by dark thoughts/questions about his sexuality/fears of being rejected for who he was.

Freddie had to run away. Alcohol; dressing up and throwing parties designed merely to draw people into his orb; hooking up with the wrong kind; were the only answer for awhile. “Just distractions from the in-between moments. I don’t like the in-betweens… because all the darkness you think you’ve left behind creeps back in.”

Of course, these distractions didn’t make his fears go away. And, when they didn’t, he tried another method. He abandoned those he felt had left him. Yes, when he had the chance to go solo, as his “I don’t need anyone” voice (and the greedy, possessive Paul Printer (Allen Leech)) told him to do; he turned away and abandoned Queen.

This was Freddie’s last ditch attempt to get rid of his anguish. Trying to make them feel all the dark thoughts surging inside him (“You’re nothing without me.”) He sealed himself off in his own world because he couldn’t stand being alone and unloved; putting into the empty spaces poor-substitute-fillers; people who used him and didn’t understand him at all. Until Mary and the Live Aid concert saved him.

Feeding The Hungry Child/“Yes, I Do Need You.”

So, why isn’t going solo the answer when you’re scared of love? Because, like Freddie Mercury, going solo leaves you starving; in a state of famine just like the children in Africa. Sure, it might seem better to convince yourself, “I don’t need anyone,” when you feel left; unwanted; unlovable; and that love is never safe. The problem is, isolation just makes your feel lonelier and no less hungry.

Mary came and took him away from his solo retreat; the retreat he’d let Paul help him create; Paul who blocked phone calls; not telling him that Live Aid needed and wanted Queen. Angry at Paul and himself; he apologized to his Queen family; asked for forgiveness; and admitted that he needed them.

Freddie realized that love is about fairness; overcoming insecurities; seeing what is fact or fiction about who loved him and who did not. And that love is not about rivalry, greed; possessiveness; or competition. Who gets more or less; who is “the best” aren’t real methods of feeling loved.  Or of loving back.

He learned that love took liking himself/connecting to those who loved him/not any longer trying to get love in all the wrong ways. He learned about doing his part not only for the ones who loved him; but for himself; for the one inside him he’d starved by running away.

About Live Aid, Freddie said: “If we don’t do our part, we’ll regret it for the rest of our lives.”  And, he didn’t have much more time.  He had Aids.

Too late, my time has come

Sends shivers down my spine

Body’s aching all the time

I’ve got to go

Gotta leave you all behind and face the truth

I don’t want to die

No, It’s Not Too Late/“Find Me … Somebody To Love”

Yes, Freddie was dying of AID’s, but it wasn’t too late for Freddie Mercury; not really. “If you bore me with your sympathy, it’s a waste of the time I have left. I don’t have time to be their victim; their AIDS poster boy; their cautionary tale.

And, Freddie Mercury decided on love. As he faced death; he also faced that love is what’s important. From his chosen family; his real family. And most importantly, that going solo doesn’t feed hunger.  Only love does.

He’s dying, but performing at Wembley Stadium for Live Aid 1985; for the starving children in Africa without taking any money, Freddie Mercury is “AO, AO … All Right!” He’s connected; giving love; taking in love. And, now he’s not going hungry. Freddie Mercury has let go of the “I don’t need anyone” posture that was only a fantasy; not the answer.  And, certainly not reality at all.

The reality is: Freddie hadn’t lost his parents; hadn’t lost Queen; and Mary was right there in his life. He just had to let them in. Adding Jim Hutton to the mix, Freddie Mercury knew he was loved. Performing at Live Aid and not going solo any longer: he’s brilliant; he’s real. He’s alive.