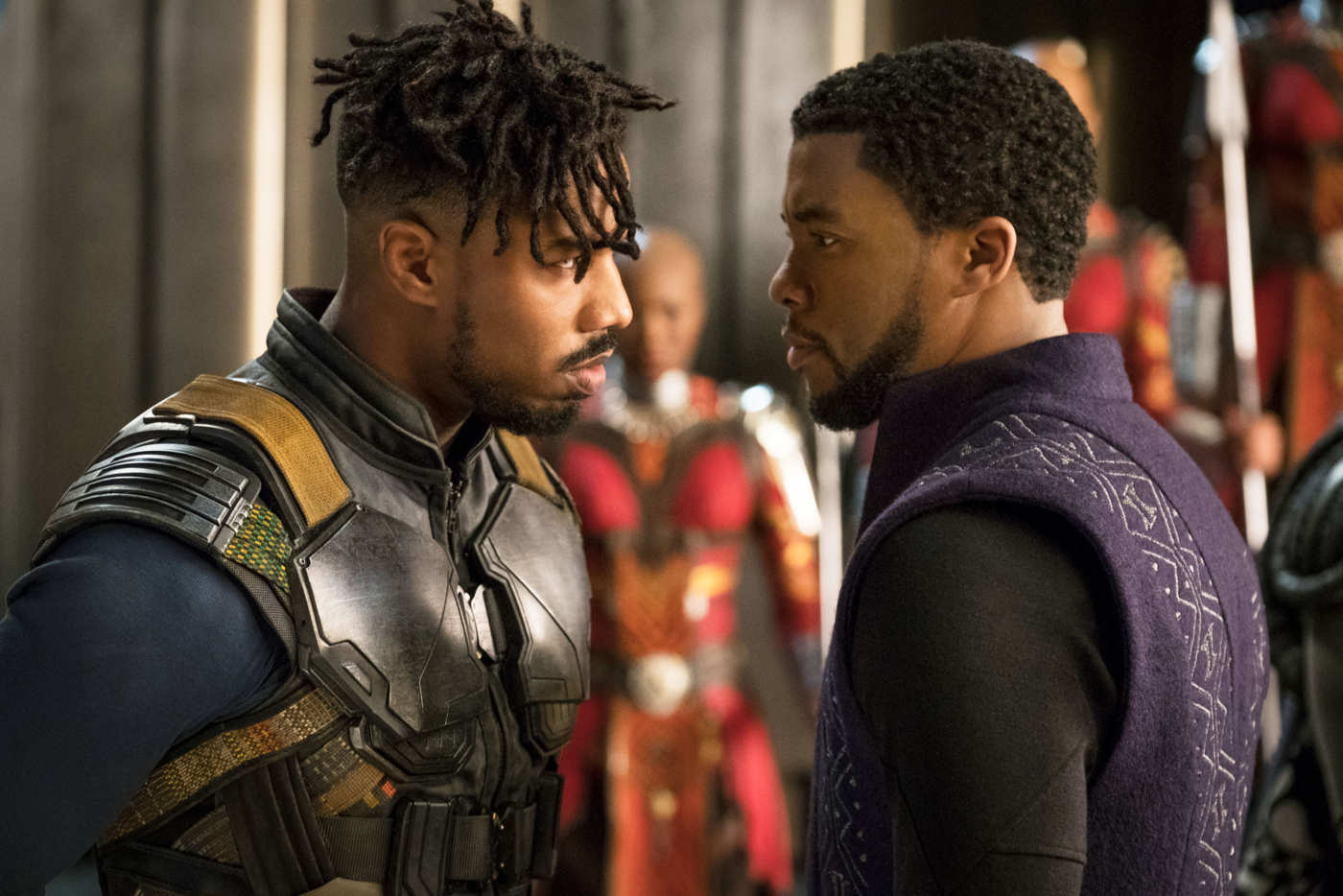 18 Feb BLACK PANTHER
What Does Heartlessness Have to Do With
An Abandoned Kid’s Need For Power?

Heartlessness, and what causes it, is the theme in Ryan Coogler’s Black Panther; as far as I can see. More importantly, Black Panther shows us how heartlessness can “create a monster,” in an abandoned child now-man, with his slow-burning hate; vengeful rage; and need for power. And, certainly, we witness what heartlessness has to do with greed and fear. Yes, there’s a lot going on in Black Panther, and a child cast aside, because keeping secrets is more important than his loneliness or need, is at the center of the story. But, let’s go a bit farther. Let’s think about why an abandoned child has no choice but to seal off his tears and his loss; instead “becoming his enemies.” Fighting power with power; and forgetting about his own heart.

The Wakandian’s of Black Panther were afraid. That if they didn’t keep their mountain of vibranium secret; it might all be stolen. The Wakandian’s fear of being robbed of their riches; make them decide centuries ago to hide in plain sight. Although they’d used vibranium to develop advanced technology; they posed as a third world country; “keeping the truth of their power from the outside world.”

Because secrecy and fear trumped everything else; they couldn’t help anyone; not the needy Africans all over the world; and not even a little boy; a relative; half one of them, living in Oakland in a ghetto world where he had nothing. Now not even his dead father; a Wakandian Prince; murdered by his uncle, King T’Chaka (John Kani); who hid the child’s existence and wouldn’t give him a home.

Heartlessness caused by greed and fear is everywhere. So, isn’t that a good reason for the “Haves and Have Nots?” If there are “have nots;” they’re the deprived ones. And those who have (like the Wakandian royalty) can sit back comfortably; never feeling deprivation; or knowing that, sometimes, having to rely on anyone else is pretty scary. In this scenario, there is no heart; no extending a hand to those who need it.

Ironically, though, there is heart in Wakanda; their precious heart-shaped herb. Yet historically, it’s been used to maintain power, might and secrecy; to give the King, the Black Panther, special powers. Which, until T’Challa (Chadwick Boseman), son of T’Chaka, takes the throne; are not used for heart at all.

But, we might ask: is there anyone from Wakanda who risks having a heart? And, if they do, who does it in the right ways; not mixed with rivalry or anger?

Yes, there is heart in Black Panther. Embodied in Nakia (Lupita Nyong’o), King T’Challa’s ex-girlfriend. And, love is that side of the story. She’s a strong woman; determined to help; who disagrees that Wakandian’s can’t find a way to maintain their strength as a nation; if they use some of their resources for people in need.

Nakia isn’t greedy. She knows that having a heart is better than isolationism born out of fear. And, with Nakia to help him, this becomes the path King T’Challa finds himself on; when he discovers his now-dead father, T’Chaka’s, heartlessness toward his young cousin. Plus the grave danger it has put Wakanda in. Heartlessness breeds hate.

It’s sadly too late for Erik Stevens AKA Killmonger AKA N’Jadaka (Michael B. Jordan; the abandoned child-now-man at the center of Black Panther. He is both one of them  (a Wakandian) and one of the world in need; left helpless; a child who had nothing to do with the loyalty conflicts that led to his father’s murder.

A Confused Heart/Lost In Anger & Hurt

Sometimes, out of anger and hurt, a heart is confused and turns the wrong way. That’s what happened to Erik’s father, Prince N’Jobu (Sterling K. Brown), sent to Oakland by his brother King T’Chaka, on a War Dog assignment.

N’Jobu saw hardships in Oakland and it radicalized him. Communities flooded with drugs and weapons; overly policed and incarcerated. People; people like him; suffering; without the tools to fight back. He wanted to help; but sadly, N’Jobu, believed in power and might: “With vibranium weapons they could fight back and Wakanda could rule them all.”

You see, Prince N’Jobu, tried to “help” in the wrong way; turning to a monster, Ulysses Klaue (Andy Serkis), a black market arms dealer; an insurgent; a dangerous man. Selling Klaue vibranium to develop the weapons he wanted; N’Jobu undermined vibranium’s helpful use to people in need.

N’Jobu had heart. But, his heart turned to killing and power; as he must have taught his own young son to do. Inspired, perhaps, by anger and rivalry with his brother; who rightfully didn’t trust him at all. Betrayal everywhere; ending in N’Jobu’s death.

Losing A Heart/ To Hate & Power

I think we might understand, then, why a young boy, Erik, loses his heart when he finds his dad murdered; with Black Panther claws on his chest. Why, with the loss of his father; and his dreams of “more” stolen from him, he might seal over his heart and vow to take what he believes is his (the Wakandan throne); first gaining as much power as he can achieve.

We might understand why that power is in killing; not in softness. Especially since his father, too, saw no other way. Why he had no choice but to harden his heart in the face of others heartlessness; becoming so angry he couldn’t feel. With relatives sitting up there in Wakanda, comfortable “while there are 2 billion people all over the world that look like us, but their lives are a lot harder.” Just like they made his.

This young boy, Erik Stevens, grew up in the Projects in Oakland. He knew poverty. He also knew there was something more in Wakanda; where his dad promised to take him and show him: “the most beautiful thing he’s ever seen … You believe that? A kid from Oakland running around believing in fairytales?”

Yes, of course a boy living in deprivation must dream. But, when that dream; that hope; which seems within reach is stolen at the hands of the Black Panther, his uncle, King T’Chaka, how can that boy stay hopeful? When he looks around; there is nothing but poverty; and unfairness. Why wouldn’t he be in such a rage that he’d want to fight power with power; and get revenge? His uncle left him and “the world took everything away … everything I ever loved.” Why would Erik Stevens believe there was anyone who wanted to help?

Having A Heart/Is Sometimes Too Risky

When there’s no one to help; having a heart is definitely too risky. To a vulnerable child left alone; having a heart means weakness; giving in to need. Power over powerlessness is sometimes the only way to go. And, finally making it to Wakanda; Erik uses his birthright to challenge T’Challa for the throne.

He tells T’Challa: “I trained. I lied. I killed. Just to get here. All this death. Just so I could kill you.” He would kill the one who had what he did not; the cousin whose father had denied him everything. This was easy. Because, long ago, Erik had already killed any feeling but hate.

When Erik wins the challenge and becomes King; he goes to the ancestral burial ground to be reunited with his father, as all new King’s do. His father sees that Erik is wearing his Wakandian necklace: “I gave you a key hoping you might find it someday. No tears for me?” “Everybody dies. It’s just life around here.” His father cries. And, the man-Erik, now King, cries for a moment too, when his father says: “Look what I’ve done. I should’ve taken you back long ago.” But, Erik’s heart can’t stay open long.

When there’s heartlessness towards an abandoned kid; a kid who lives in a world of poverty and need; robbed of his father and left to fend for himself, what could we expect? Failed by his uncle who could have helped, we find in him a life goal: to get power over that loss.

Hateful revenge is his only way. He won’t need anything or anyone. He’ll get power, instead, by himself. And, he will have it all. His answer? Become your oppressors; take on the skin of your enemies; be them. Don’t ever risk being hurt again.

Is there another answer? Yes, for someone not so far gone they can’t be reached.

A King With Heart/& A Conscience

T’Challa, who (almost died) when Erik won the challenge for King, joins his father in the ancestral burial grounds: “You were wrong. All of you. To turn your backs on the rest of the world. We let the fear of our discovery stop us from doing what is right. No more! …  He is a monster of our own making … I must right these wrongs.”

And, he does, with M’Bacu’s (Winston Duke) help. M’Bacu, the leader of the Jabari, who’ve isolated themselves in the mountains,  saves T’Challa, thought dead, after Erik viciously wins his challenge. And, because the Jabari have a deep moral conscience and respect of the past,  M’Bacu comes to help T’Challa fight Erik to restore T’Challa’s right to be King.

It’s not just respect for the past; but learning from his father’s mistakes, that helps T’Challa be a different King. Winning back the throne, he carries the dying Erik to finally see the beauty of Wakanda; the beauty he’d longed to see. But, it’s too late for Erik. His heart; already in bondage to hate and cruelty; can’t be trusted or saved.

T’Challa, though, who always had a heart can, now, with Nakia’s help, use it. Love saves. Not power. He buys the building in Oakland where his father, T’Chaka, killed Erik’s dad. Plus two other buildings. To his  sister, Shuri (Letitia Wright), the technology genius, who’d hoped to go to Coachella on her first visit to California, he says: “This will be our first Wakandian International Outreach Center. Nakia will oversee social outreach and you will spearhead the Science and Information Exchange.”

Their spaceship sits on the basketball court where Erik played as a little boy; as his father was killed. Another young boy, Erik’s age at the time his father died, comes up in wonder as he asks T’Challa if that spaceship is his? T’Challa couldn’t save his cousin. But, with Wakandian resources and his heart; he can save other children in need; from having no choice but to turn from love; to heartlessness for power.