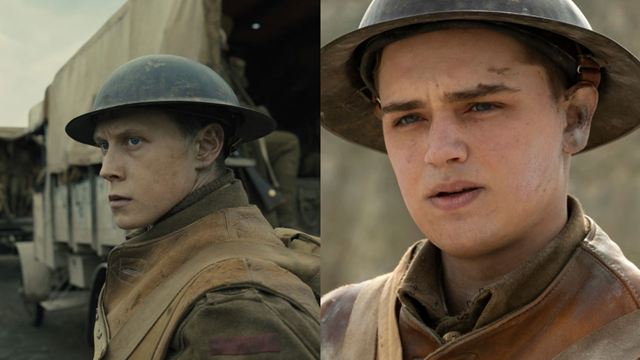 We see the trauma. And, we witness the friendship and love. I’m talking about Sam Mendes’s more-than-war film, 1917. I’m also talking about a different kind of war that all of us are fighting now. A war with an invisible virus. COVID-19. And, just as in 1917, it’s love for each other; our fellow warriors in cities and across the globe; friends and family – yes, it’s love and determination to fight and not give up that will get us through. So, let’s take Blake and especially Schofield’s 1917 journey to heart. See what we can learn from it. And, know that above all else: love survives and gives us hope.

Two Friends On A Mission In War

It’s April 6, 1917. Two friends, Lance Corporal Blake (Dean-Charles Chapman) and Lance Corporal Schofield (George MacKay) are given a mission. Blake is good with maps; that’s why. And, two are better than one. It’s not always “he who travels the fastest, travels alone.” In times of war and terror, we all need to know someone is there.

There’s a lot at stake. Not the least is Blake’s brother – and a lot of other lives. They have to get to “the Second” and tell Colonel MacKenzie (Benedict Cumberbatch) to call off a planned attack. The Germans have retreated. The Colonel doesn’t know. They’ve no idea what they’re in for. But, despite Schofield’s trepidation, they must go.

Yet, Schofield wants to wait for nightfall so no one sees them. Blake will hear nothing of it: “It’s my big brother.” This is love. He runs off fast. And, Schofield must keep up.

Blake is panicked. Determined. Won’t stop. Terrified that any hesitation means loss. Schofield is more level-headed; Blake’s the emotional one. Both are necessary – one means not panicking. The other drives them to do what they can, also for each other.

Through Fear & Danger Together

It’s dangerous in 1917. Crossing through German territory. No certainly the enemy is really gone. Is there a trick waiting around the next corner? Yes, there are unforeseen obstacles along the way.  Schofield gets caught in barbed wire. Blake helps him.

They hide from airplanes overhead. Look for a gap in the body of water they need to cross. Dead bodies are all around them. A warning. To keep themselves alive. There is terror. Of what and who might be lurking. They draw their guns. Point. Watch. Wait.

The German’s aren’t long gone. Embers still smoldering. Another warning. More fear.  The unknown. What can’t be trusted. A tunnel they must enter to get to the other side.

Massive underground bunkers. Rats. And, a tripwire – one they can’t avoid. A rat runs across it – and, Blake and Schofield are caught in the midst of an explosion. If it was just terror of everything coming down – now it’s a reality. Schofield is buried.

Blake – panicked – digs him out. Is Schofield dead? Looks that way. Blake needs his friend. Drags him upright. And coughing up debris, he’s back. Yet, not out of danger. Explosions continue. They must keep moving. Schofield, debris in his eyes, can’t see.

Blake is his eyes now. Tells him they must jump. “Don’t let go of me!” Saved by Blake, Schofield cries: “Why in God’s name did you choose me?” Later, though, as careful as they try to be of the various traps at hand – Schofield can’t save Blake.

Helping each other, the friends try to keep hope and resolve alive: “The Coast is directly to the SE. If we keep that bearing, we should make it.” Blake is good with compasses. Yet, what fuels their determination is family.

“When I knew I had to leave and they might never see me again …” Schofield chokes up. That’s why he’s mad at Blake for choosing him. It’s also what keeps him going when he’s alone and his solitary expedition gets tougher. Now, they remember.

Blake remembers his mother’s orchards. The blossoms. Picking fruit with his brother. Home. When there was peace. Not war. Their memories are interrupted. German planes fly overhead.

The two friends scope out buildings of an abandoned farmhouse where they stand. Find fresh milk in a pail. Drink. Is this place safe?

The enemy planes “dog fight.” And, suddenly, one flies straight towards them, crashing and burning. A German soldier is on fire, screaming, dying. Schofield yells: “Put him out of his misery.” Blake can’t. And runs to help.

Thoughts of his brother and family bring Blake misdirected empathy. The German stabs the man who tries to help him. Killing – more important than living.

Blake, mortally wounded, gushes blood; of life, of compassion. Schofield kills the soldier, he tries to carry Blake. But it’s too late. “Promise to write my mother: Tell her I wasn’t scared, and I love them. Talk to me. Tell me you know the way.”

Blake dies and the world, right now, is quiet. The quiet of loss. And, loneliness. Solo to finish the mission. To save Blake’s brother and the other soldiers in the Second.

Schofield takes Blake’s rings and medals. Tucks a photo of family in Blake’s pocket so he’s not alone. Some English soldiers from another Unit arrive and ask if he’s all right.

There are friends and comrades along the way. It’s hard to leave his friend, but Schofield is ordered by the Captain to allow them to take him some of the way.

Loss In The Time Of Urgency & War

Loss needs grieving. Yet, Schofield has a mission to accomplish. His feelings must be put aside. The Captain says: “Can I tell you something you probably already know? It doesn’t help to dwell on it.” Not now. So, Schofield takes on Blake’s determined spirit.

This is the way he’ll push through. He wills himself to complete the mission. For Blake. Blake’s brother. His own family (who we don’t know about yet). Himself.

Schofield rides in the midst of chatter and camaraderie. Noticing what he’s lost, but grateful for the kindness of some. And, he, in turn, helps dig them out of the mud. Time is moving fast. He can’t be stuck here either. Schofield must get to Captain MacKenzie.

Although he’s warned he’ll never make it – he insists: “Yes, I will.” Keeping close to the heart the courage of two now. His and Blake’s. Some men just want to fight. Not Schofield. He’ll only fight off danger. To preserve his life. And, others too.

He carries on through one peril after another. Exchanging fire. Kills a soldier on a balcony. Falls down stairs. Lies in the dark moaning, bleeding from the back of his head. He will go on. But, in the dark is a dead soldier. In the light, a bombed-out city.

A lone and tired soldier, Schofield walks through it. Not defeated. Running through gunfire and grenades. Running fast. Through buildings on fire, in wild blazes. Evading danger, he hides in a building. Hears the voice of a scared woman.

A reminder of home.

Helping Others Along The Way

The woman cowers, thinking he’s the enemy. No, a friend. She’s French. There are no others. Only a baby that isn’t hers (but now is.) A little girl. He offers milk and bread. What he has to give. All of it. His comfort. She knows little about children. He does.

He helps. She cares for his wound. Hand on his shoulder, she comforts him. And he, her. There is compassion in war. Reminders of love. Home. Warmth he remembers.

Schofield touches the baby. Tells the little one a nursery rhyme. “Do you have children?” The woman asks. Of course, he does. We see it; know what he’s living for.

She wants him to stay until it’s dark. To be safe. No, he must go. Quickly. To reach MacKenzie and stop the attack before the loved ones of others are killed.

Running again, Schofield wrestles a German soldier to the ground and chokes him. Punches yet another. Determined. Strengthened by the child. Remembering his, he runs. Fast. Keeps running. Through gunfire. Won’t stop.

Then, there’s a long, jump down into dangerous white water rapids. It’s a different war now. Pulled under, Schofield fights. We wonder if he’s dead, but, no, he must make it.

And, then he emerges where the waters are quieter now. Gasping, floating, holding onto a log that appears magically when it’s needed the most. A miracle.

Because now he knows he’s close. Sees flowers. And, fruit blossoms. Remembers Blake. Without being good at maps or compasses, he’s in the River where he needed to go.

Dead bodies float all around him, but he is alive. Safely on shore, he cries. It’s more peaceful here. In the green countryside. But, Schofield isn’t out of the woods yet.

Variations Of Faith As A Stalwart Companion

Faith doesn’t have to be religious. Above everything, faith means trust. Conviction. That you (and we) will persevere. Belief in your self and the goodness of others. Hope.

That’s what Schofield has. Finding it not only in himself. But, in islands of kindness along the way. Blake. The Captain. A turbaned soldier. The comforting French woman.

Now, he hears singing. Voices that rise above the pandemonium of gunfire and threat: “I’m going home to see my mother … going there to see my father …” He joins the group. Distant, leaning against a tree. Bone-weary. Thinking he still has a ways to go. In 1917.

“The Devons. I have to find the Devons,” he tells them. “We’re the Devons.” He’s there. Yet, “why didn’t you go over,” he asks? They’re the second wave. The last. He must find MacKenzie. Fast. This is the end of the line for him. And, them.

With a surge of only-adrenaline, Schofield takes off running. Pushing his way through fatigue and a line of soldiers. Yelling: “I’ve got a message from General Evermore. He’s called off the attack. Where is MacKenzie?” Running, just as soldiers are told to attack.

They can’t. So – Schofield runs right through the already charging soldiers. He runs. Because we know his life and the lives of others depend on him. Seeing nothing else, he runs. “Let me through. I have a letter. You must stop this attack!”

The Germans have been planning an ambush for months. It’s a trick. Yes, there is deception in times of war. Only clarity. Sanity. Perseverance – gets us through.

What Brings Hope In Times Of  War

Persevering brings hope. So does determination. Doing what is necessary. And, believing that although some wars must be fought, lives must be protected and love kept alive. Schofield reaches General MacKenzie in time. But, his mission isn’t over until he finds the other Lieutenant Blake. Alive. And, he tells him the sad news.

Joseph cries for his brother Tom. Thanks Will Schofield that Tom didn’t die alone. Insisting that Schofield gets to the mess tent for food. But, this isn’t first on his mind.

Will (we know his first name now, making him more than a soldier at war) walks away to a lone tree. Leaning against it, looking out over rolling plains, he takes out a photo. Of his two daughters and wife. On the back, it says: “Come back to us.” He will. They got him through the dangers of war. Love for his family kept him alive.

In these now challenging times of 2020, Sam Mendes’s 1917 sends an important message. Like Schofield, we must listen to our Generals (Mayors, Governors, Doctors, and Scientists). Physically stay 6 feet apart, self-quarantine, and socially isolate. But, our love, humanity, and dedication to each other can reach across the dangers and the fears. Our voices comfort. Hope will prevail.