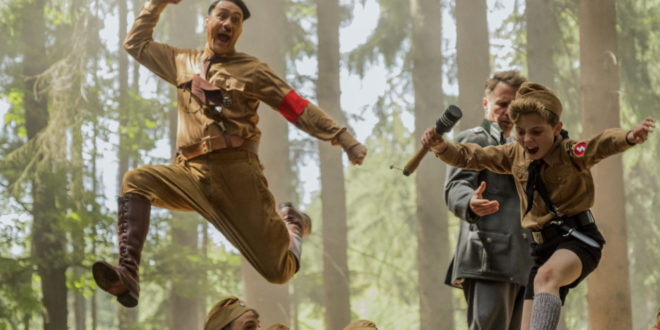 When you’re a scared little boy in the middle of a war and your father’s missing, Adolf Hitler can become your best friend. That is, in your mind at least. And, why not? He’s the man with the most power in all of Germany. What better friend to help you stand up to your fears? Or is he? Taika Waititi’s radiantly hopeful Jojo Rabbit shows us what makes a little boy fall for propaganda – and just why he needs Hitler as his imaginary friend. Yet, it’s complicated, isn’t it? Because when he begins to question his own convictions, that supposed “friend” turns on him.  Why? The answer lies in – LOVE.

Jojo Betzler (Roman Griffin Davis) has reasons to be scared. Germany’s at war. War itself is terrifying. His father’s gone. He’s supposed to be the man of the house. But, he’s only 10. Danger is all around. You can lose everyone you love. So, you better believe what the man in power says. Right? Otherwise, you could be in serious trouble.

Why wouldn’t the German propaganda get hold of Jojo’s mind? To fight the propaganda in his head – that tells him he’s small and weak. Yes, he’ll be a good Nazi. And, the Hitlerjungen Training weekend will “make him a man.”

But, Jojo’s not so sure he’s got the courage of a panther (maybe even a German soul.) He turns to Adolf, his imaginary friend: “I don’t think I can do this.” “Sure, you can. You’re a little scrawny and unpopular. But, you’re the best little Nazi ever. Get out there!” Heil Hitler …

Already, we see, this supposed friend has a demeaning side. Yet, Jojo needs him. And, as long as he admires Adolf, things are ok. Like the Adolf in his head, Jojo talks big. Jews aren’t scary. He “loves killing.” But, really? Jojo can’t kill the little rabbit. And, what does he get for that? “You’re a coward, just like your father.”

Yes, he’s mocked. (Mocks himself, to boot). “You’re as scared as a rabbit! Jojo Rabbit! Jojo Rabbit!” Turning to his imaginary friend (because what else is there to do?), gives him a sense of power: “Humble little bunny faces a dangerous world every day. Be the rabbit!” Jojo who will be brave; is blown up by a hand grenade.

So much for voices in your head that give you an inflated sense of power. Yet, he better stick with Adolf. There’s no one else to help him.

Why A Boy Needs Adolf As An Imaginary Friend

Jojo’s alone and scared. His dad’s gone. And, his mom’s preoccupied. Not that Jojo knows why. But, he often comes home to an empty house. It’s a big guess when (or if) she’ll show up. What if she doesn’t? Anyway, in these scary times, a boy needs his dad. Dad’s are strong. A match for the likes of Adolf.

Plus, after the grenade, and a bum leg from his injury, Jojo’s been demoted from the ranks of Hitler’s youth army. That seems like weakness. And, the burn on his face? That makes him feel ugly. Sometimes a mom won’t do. It isn’t enough to be (even lovingly) told he’s fine the way he is. He’s not. Not when he needs to feel stronger than strong.

That was before the accident too. Jojo’s had a lot of loss. Yes, his dad’s fighting the war somewhere else. A different war, it turns out. His sister Inge’s dead. It’s terrible for a little boy to feel so totally alone.  Always scared that those he needs won’t stay alive.

An imaginary friend – he’s always there. And (it’s a fact), you can make him whoever you want him to be. Even, the most powerful man in Germany. A man who takes you under his wing, as a dad would. Reassures you that you’re strong. Is kinder than in real life. Because you’ve created him. To turn to when there’s no one else to talk to.

Plus, when you’re scared and lonely, you want someone around all the time. Whenever you need them. That’s the real benefit of an imaginary friend. They are yours completely. Since they exist only in your head. And, not just any imaginary friend. You need one who’s not scared of anything. There’s too much to lose. Even your mom.

A Mom Who Knows Courage & Love

Yes, Rosie, Jojo’s mom (Scarlett Johansson) has been taking a very big risk. Living on two different sides of the war. Jojo has no idea how brave his mother is. Sure, she plays the good German. In fact, has a position of power in the government office. That gives her a good cover. For awhile. But, she has another fight to fight. Not the least, for Elsa.

Elsa’s (Thomasin McKenzie), the girl in the attic. You could say, she’s the terror and hatred in Jojo’s head. In German heads. Not Rosie’s. She won’t let love be destroyed by barbaric assumptions. And, she never lets those assumptions promote her fear. Plus, Elsa’s like a daughter. Her daughter Inge’s friend. Inge’s dead. Elsa’s a Jew.

Rosie protects Elsa. Hides her. Feeds her. Gives her courage. Because Rosie is strong and brave. Stronger than Jojo can possibly know. And, Rosie is Elsa’s hope. A loving refuge; in the midst of hate. In a house where Jojo’s hate still lives and breathes; fostered by propaganda, misunderstanding, and, yes, delusional fear.

Jojo has real reasons to be afraid. But, this belief that Jews are the ones to fear and conquer to feel strong and powerful? That’s promoted by Adolf; the real one and the imaginary.  Jojo doesn’t know the truth about hate. Rosie does. And, she’ll die for it.

To see her shoes. The shoes of a woman (his mom?!) hanging in the town square with other traitors, well that’s a traumatic shock for Jojo. He’s already discovered she’s not the devoted Nazi he thought – finding a hungry Jewish girl, hiding in the attic. But, this? Now, he’s all alone. And, the loss of his mom will begin to shake up Adolf’s hold.

But, first, he must learn what love is and what it’s not.

Why An Imaginary Friend Loses Power (Over Fear Of Love)

Jojo’s imaginary friend isn’t just any imaginary friend. He’s really not a friend at all. More a way to hide. Adolf only knows fear and hate. Not love. He’s Jojo’s supporter when Jojo’s aligned with him. In the fear that loving someone makes him weak. People you love can go away and die. Inge. His dad. Now, his mom. Better not to care.

Adolf is nice when Jojo listens to this kind of propaganda. And, Jojo needs Adolf to control his fears. Adolf does this by promoting them; making Jojo feel weak without him. Using encouraging and (when those don’t work) demeaning tactics to stop him venturing into strange territory. “Don’t let her (Elsa) put you in a brain prison.”

One that shows him the other side of hate. He doesn’t for a while. After all, Jojo believes all the propaganda the real Hitler spews. And, now there’s an actual Jew living in his attic. Very scary. And, there could be hundreds living in the walls.

He has to outwit her. Adolf tells him to find out all he can. He’ll make her confess her secrets. That’ll give Jojo power over her. Maybe scare her out of his house. That is before he can let himself like her more than he already does. Will Adolf help him? No. A pumped-up version of himself turns out to be just as ignorant and lost.

The power (but also the weakness) of imaginary friends is that you’ve created them. They serve their purpose. Giving reassurances you need not to feel alone. Feel stronger than you are. But, when that imaginary friend is paralyzed by the limits of your own blindness, then, what do you do? There’s no choice but to face your fear.

And, learn to love, not hate.

Learning Love Is The Strongest Thing In The World

Rosie taught Jojo a lot about love. As scared of it as he is. She loves him, even if sometimes he can’t see it. Because he feels small. And not very lovable; partly because of his hate. But, Rosie believes in him: “Someday you’ll meet someone special.” “I wouldn’t even know if I saw it.” “You would. It’s a pain in your stomach.”

It turns out, Elsa has a lot to teach Jojo about love. Once he learns to feel remorse for his cruelty to her – and, as his sorrow for her pain loosens Adolf’s hold. Yes, it’s just as Elsa says. His version of Jews lives in his head. And, maybe he’s wrong.

Elsa’s nice, tells him he will be kissed. “Do you want me to kiss you, Jojo?” He does, but Nazi’s and Jews aren’t supposed to hang out or like each other, let alone kiss. “You’re not a Nazi, Jojo.” Maybe he isn’t? Because now the butterflies happen. A Jew who’s nicer than Adolf? He realizes he might love her when the Nazi’s knock at the door.

No! Will they take her away? She pretends to be Inge. His sister. The Captain, guilty for Jojo’s wounds, sees through her but protects them. As Nazi’s usually don’t.

Then, Jojo’s mom is killed by Nazi’s. So, how can he be one now? Plus, Elsa in the attic, kind Elsa, is the only real person he has left. You can only go so far with an imaginary friend. Especially one who’s becoming quite cruel. To Jojo, his supposed friend.

Maybe love is a different kind of power? Over the fear of those, he’s been told he’s supposed to hate. But love – it isn’t easy. For its own tangled reasons. He’s scared.

Getting Free Of Adolf – Who’s Not A Friend At All

Look what happens when you love someone. They die. Or go away. Elsa knows. She’s lost everyone too. But, love is what Jojo needs the most. They sit together. He puts his head on Elsa’s shoulder. “What will you do when you’re free?” Dance. she says.

Jojo hears that Hitler gave up and killed himself. So, Hitler  – the man he counted on – is a coward. Jojo stands in the middle of bombed-out buildings. An American flag flies. The war is over. Elsa is free. But, if she’s free, she’ll leave him too. That can’t happen. So, he lies. Tells her Germany won the war. Is he a coward too?

He’s a little boy who still needs a friend to feel safe. And, Adolf in his head isn’t one. That’s becoming clear. Adolf tries one last time to use fear to convince Jojo of the dangers of love: “You’re in love with the thing in the attic, aren’t you? It’ll never work out. She’s too old for you. And, you’re ugly. She’s going to leave you, you know that …don’t you?”

At one time, before Jojo felt shame and remorse for his cruelty, Adolf could have drawn him in: “Put on a swastika and come back to me where you belong.” No! Finally, Jojo does the bravest thing a scared boy can do. He kicks that imaginary friend who isn’t a friend, right out the window.

Jojo chooses love. Even if that’s the riskiest thing of all. Elsa’s angry. She could leave him for his lies. But, when he says: “What do we do now?” She says, “We dance.” And, they do, He’s free of hate – no matter what happens next. And, Jojo finally knows that the Adolf voice in his head isn’t real power after all.